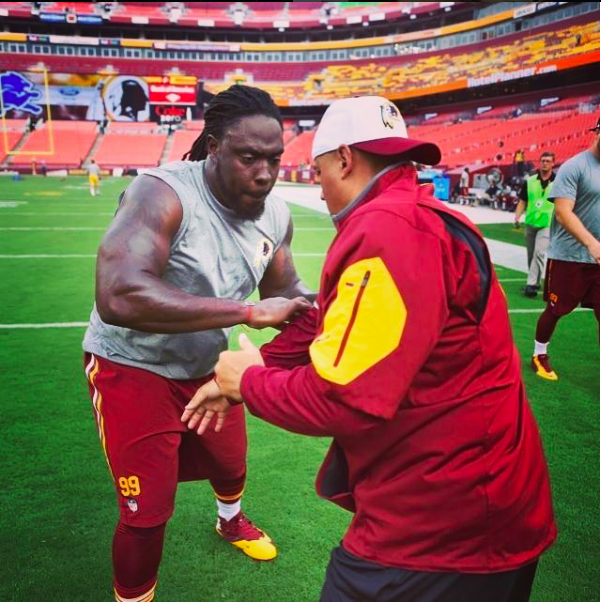 Which is why we found the latest addition to the New England Patriot’s training team so exciting. According to a recent report by The Boston Globe, the NFL team has hired Joe Kim, a martial arts expert, as a pass-rushing consultant for the forthcoming season.

“GrandMaster Kim is recognized as one of the most successful Taekwondo Instructors and Coaches in the United States. He has produced over 250 Black Belts as well as several National and International Champions,” the bio on the website for his Avon, Ohio gym, Kim’s Martial Arts School, reads. “GrandMaster Kim has dedicated his life to the development of Taekwondo in the Cleveland community.”

According to a 2016 profile in The Chronicle-Telegram, Kim started taking Taekwondo when he was 5. After a bullying incident at school, his mother turned to TKD to help her son protect himself and gain some self-esteem. By 11, he was a black belt. He went on to become a multiple time member of the U.S. National Taekwondo Team, a bronze medalist at the 1990 Pan Am Games and World Cup, a two time Olympic Festival Gold Medalist and National Champion.

Kim began working with NFL teams in 1992, when coach Bill Belichick sent three of the Browns’ defensive linesmen to work with him. “He wanted to call upon my expertise and help martial arts make its way into the football world,” Kim told the paper about his early work with Belichick. He added that the coach was still a mentor to him.  “One thing Coach does is he develops people. Look at the history of some people that worked with him. “With me, he just truly educated me on the needs of a football player and where the combative system can transfer over to the football field.”

Since then, Kim has gone on to work with multiple NFL and NCAA teams, including the Dallas Cowboys, Buffalo Bills, Miami Dolphins, Chicago Bears, New York Giants, and Penn State. Now Kim is reuniting with Belichick to work with the Patriots. He’ll also be working with defensive tackle Danny Shelton again, whom he previously coached during one of his stints with the Browns. (To see his full football resume, click here.)

Kim went on to say that reactivity and preparation were key components of his philosophy for training, going so far as to evoke a certain beloved martial arts legend in his explanation. “We don’t want to anticipate things. On the field it happens too quick, it’s too violent. You have to train your body to be reactive. Bruce Lee said, ‘I’m not afraid of the man that knows 10,000 kicks. I’m afraid of the man who’s practiced one kick 10,000 times.’ When training these guys, I keep that in my head.”

Are you a football fan? Or a Taekwondo fan? Both? Have you been following GrandMaster Kim’s work in the NFL? Let us know in the comments!

And check out our online store. No matter what sport you play, we’ve got the Taekwondo gear and martial arts supplies to help you with your cross-training game.