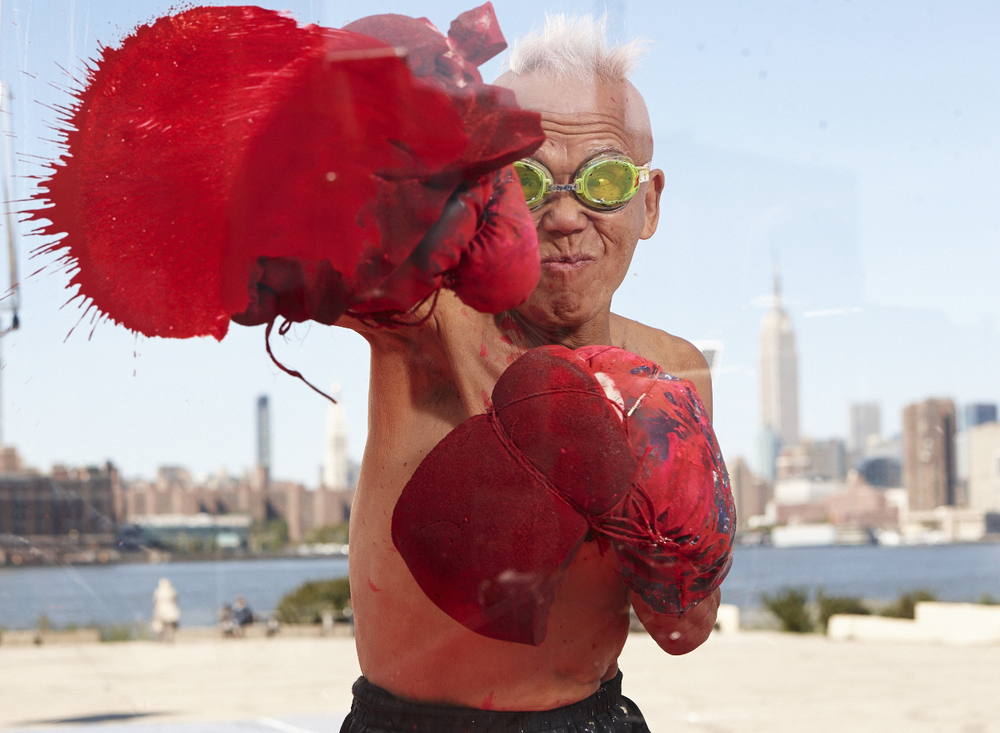 Ushio Shinohara in Cutie and the Boxer, Source: Dogwoof distribution

Meryl Streep’s somewhat awkwardly declared that mixed martial arts were “not the arts,” at the 2017 edition of the Golden Globes, but there is actually a significant amount of common ground between fine arts and entertainment and those of the martial variety. Many artists train in martial arts to keep both their bodies and minds in shape. Others turn to the martial arts for inspiration in everything from sculpture to novels to films (for a deeper look at boxing’s significant influence on art, check out our 2016 blog on the topic). Some, like former glam rock musician Robin Black, actually make the jump from the arts world to professional fighting and MMA commentary.

Some artists, like neo-dadaist luminary Ushio Shinohara,  even go so far as to incorporate martial arts into their work.

Shinohara was born in Tokyo in 1932. His father was a tanka poet and his mother was a classically trained painter. He followed in the latter’s footsteps by attending the Tokyo Art University in 1952 to major in oil painting. After leaving university, he formed an avant-garde collective called the Neo-Dadaism Organizers with fellow artists like Akasegawa Genpei, Arakawa Shūsaku, and Yoshimura Masunobu in 1960. It was during this period that “the Warhol of Japan,” as he came to be known, first developed his iconic “boxing paintings.”

“Stripped to the waist, he would cut up his own t-shirt and wrap his hands with the cotton, striking the studio walls with his “gloved” hands for a lively, irreproducible mashup of painting and performance,” Artsy’s Bridget Gleeson wrote of his technique in 2016.

In 2017, the Ronin Gallery offered a slightly different take on his style: “Attaching sponges to his boxing gloves, Ushio would saturate the gloves with paint and punch his way across a long paper or canvas. Hair shorn into a Mohawk, he produced these works before eager crowds, emphasizing the art of the action itself.”

These paintings and performances made an immediate and lasting impression. “When we think of Tokyo in the 1960s, we think of Shinohara with his Mohawk and his boxing paintings, his complete freedom, wild antics, and refutation of conformity or convention of any kind,” Artsy quotes Alexandra Munroe, the curator of Asian Art at the Guggenheim and a longtime associate of Shinohara’s, as saying.

“Ushio’s ‘boxing painting,’ images created by bashing a wall with fists wrapped in ink-soaked cloth, gave him a name as an artist to watch—and perhaps to watch out for. It also got him noticed by the famed photographer and director William Klein, who captured Ushio in action in 1961 and published the photos in Tokyo, his influential 1964 collection,” Fukasawa Keita wrote in a 2014 profile on the artist for Nippon.

Shinohara moved to New York, where he continues to live, in 1969. Unable to capitalize on his critical successes with commercial ones, he started making art out of salvaged materials, like cardboard, when he could no longer afford other supplies. He never completely gave up on his boxing painting, though. Shinohara returned to publicly performing his boxing paintings at Osaka’s National Museum of Art in 1991 and has been regularly exhibiting his work and performing, with a pair of paint-soaked boxing gloves and his trusty mohawk, in galleries in North America and Japan ever since. (Artsy has an excellent collection of photos from his 2016 exhibit, Ushio Shinohara: ACTION! Boxing Paintings and Sculptures, here.) He also won the esteemed Mainichi Art Prize in 2007.

In 2013, Shinohara’s work found a brand new audience when he and his wife Noriko Shinohara, who is also an artist, became the subjects of the critically-acclaimed documentary Cutie and the Boxer. The film premiered at Sundance that year and nabbed filmmaker Zachary Heinzerling the Best Director Award at the festival. It was also nominated for the Grand Jury Prize. Cutie and the Boxer went on to win raves reviews and awards on the film festival circuit, and earned an Oscar nomination for Best Documentary Feature Film. Its success also elevated the profiles of both artists. Check out the trailer below:

Now 85, Ushio Shinohara and his mohawk are still going strong. The Ronin Gallery hosted a joint retrospective on his and Noriko’s work just this past November. His influence can also be seen in the work of younger artists like Bart van Polanen Petel, a Dutch boxer turned painter who attached canvases to a heavy bag to paint with boxing gloves for a series of works in 2014. His strikes — or strokes, if you prefer to use artistic terminology — are a bit more technical than Shinohara’s, but the spirit is similar and the final results are also impressive.

What do you think of Ushio Shinohara? What’s your favorite martial arts-inspired art? Let us know in the comments!

And, if you’re thinking of trying your own boxing paintings, check out our online store. If you’ve got the canvas and the paint, we’ve got all of the boxing gloves you’ll need to get started.