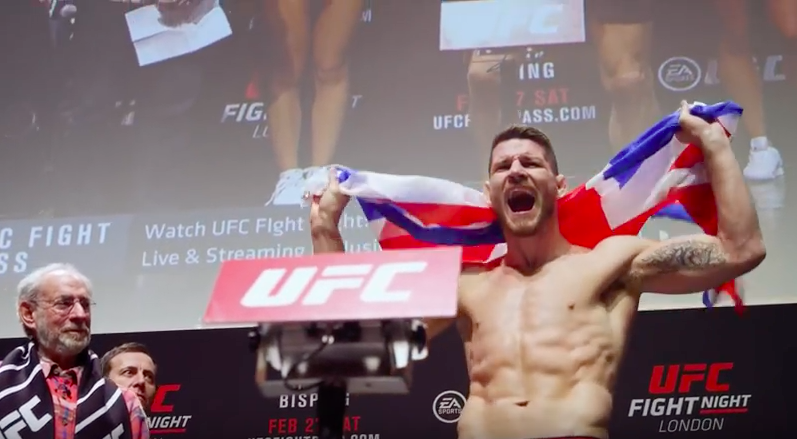 Michael Bisping weighs in for his fight against Anderson Silva in February 2016.
Source: YouTube

It’s the end of an era. Michael “The Count” Bisping is hanging up his 4oz gloves. The former UFC Middleweight Champion and The Ultimate Fighter 3 winner announced his retirement from MMA on the May 28 edition of his podcast, Believe You Me.

“So obviously I’ve teased this for a long time now, I might fight again, I might not. And unfortunately it’s not a fight that I’m announcing,” he said. “I am going to announce my official retirement from mixed martial arts.”

To say that he “teased” this moment is, perhaps, an oversimplification. Bisping, who turned 39 earlier this year, has been quite open about his complicated feelings surrounding his future in MMA for some time now. Anyone who has followed his impressive and groundbreaking career knows that this decision has not been an easy or a sudden one for him.

Bisping recently revealed that he first considered retirement two years ago, planning to bow out if he lost his middleweight title shot against Luke Rockhold at UFC 199. When he won that match — and became the first British champion in UFC history — his plans obviously changed. Even as his career reached new heights, though, long-term injuries — including a problem with his right eye that began in 2013 and some ongoing knee issues — forced him to seriously consider his future. When he injured his left eye after suffering a knockout loss to Kelvin Gastelum in the main event of UFC Fight Night 122 last November 25, the question became even more pressing.

When negotiations for one final fight — tentatively against Rashad Evans at UFC London last month — fell through, Bisping happened to catch a film called Journeyman on a flight. This 2018 picture about a fighter who is facing both physical and mental health issues as a result of his time in the ring made him realize what was truly important to him at this point in his life.

“I was watching this movie last night and I just thought, it ain’t worth it. It ain’t worth it. I mean, what else am I going to do? I’ve won the belt, I’ve had tons of wins, I’ve done everything that I set out to achieve. What’s the point in flogging a dead horse? Not that I’m a dead horse, but what’s the point? I’ve done everything that I set out to achieve, and fortunately now I’ve used my platform to open other doors. You know, you’ve got to know when to walk away. I’m almost 40 years old, the time is now,” Bisping said. “So, yeah, there you go. Great career. That’s that. Thank you everybody.”

Appearing on the June 5 edition of the MMA Hour, Bisping added, “It’s been a hell of a ride. It’s been amazing, but I knew watching that movie, I’m like, yeah, this is it, this is the end. I can’t do this to my family anymore. I can’t do it to myself. Obviously my eye is in terrible shape, and my good eye, I’m having a couple of issues with that as well. Nobody wants to go blind, and a friend of mine as well said, ‘You know if you went blind, you would give any amount of money in the world and get your sight back,’ and of course you would, so it just isn’t worth it.”

Although he admits that he will miss MMA every single day, he knows that he’s made the right choice. “My knee still gives me problems,” he added. “I’m still getting treatment on it three times a week, and that doesn’t seem to be getting better. I’m almost 40 years old as well. Forty years old. I’ve had more fights than anyone in the UFC. I’ve had more wins than anyone. I’ve won the belt. I’ve made some money. I’ve fought literally all over the world. What more is there to do? You would be a fool to carry on.”

Bisping has long been a groundbreaker and an inspiration in MMA. In addition to being the first British UFC champ, he was also one of the first Ultimate Fighter winners and one of the breakthrough stars who helped to bring the UFC and mixed martial arts to a newer, wider audience in the ‘00s. His late career comeback, culminating in his championship win, was a testament to possibility for second chances in the sport. And, even in retirement, he remains a role model for the next generations of MMA stars and hopefuls.

Martial arts might be a lifelong journey, but that doesn’t mean that we spend the entirety of that journey competing at the highest level. And knowing when to step back, when to regroup, and when to adapt is one of the most important lessons we will learn along the way. We don’t quit, but we learn how to take care of ourselves so that we can continue to learn and grow in our disciplines over the longer term. From the white belt learning to tap to the champion learning when to retire from competition, in martial arts we all must know the difference between determination and carelessness. If you don’t tap to a submission, you could end up injured and have to take precious months away from your training to recover. If you don’t know when to step away from competition, you could also end up injured — or worse. Even in retirement, Michael Bisping is an inspiration.

Are you a Michael Bisping fan? What do you think of his announcement? Let us know in the comments!

And check out our online store. We’ve got all of the MMA gear you’ll need for your own healthy and lifelong journey in martial arts.