You’ve heard me say in this blog before how skill always overcomes brute force. In a fight, all things being equal, the stronger man wins. But the thing is, all things are never equal. You can develop your skill so that it far outweighs somebody else’s strength.

Here are two videos to demonstrate this unique aspect of the martial arts.

A short video in which this 160 lbs. woman beats a 300+ lbs. man. She does it with superior leverage and positioning. It’s a lot of fun to watch too.

It takes about a minute and the man’s exhausted.

I particularly love the duck under throw that she does. She does it twice and the man is powerless to stop it. If they’d been fighting on concrete that could very well end the fight.

A lot of people don’t realize this but the Tai Chi move squatting single whip is a duck under throw. At least that’s one of the applications. One arm pulls the opponent over your head while your body slips under. If you’re mean you can get up really quick while you’re under their legs and really flip them over. It’s a nasty move and it’s deceiving because when you’re doing the form it’s one of the most beautiful moves in Tai Chi. 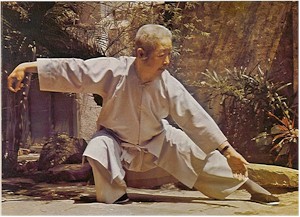 The second video is from the Fight Smart guys. Really interesting. He asks people on the street to try and punch him for a good 45 seconds. He slips almost all the punches. Nobody really connects well with him. And yes, these people on the street are not trained, but it doesn’t matter. He’s making a point and it’s a good one.

There was an old school gym in NYC called Kingsway Gym. The owner used to say: “Boxing is brains over brawn.” It’s an old saying but so true.

Skill takes a long time to develop, but when honed to perfection, it represent the pinnacle of human combat.