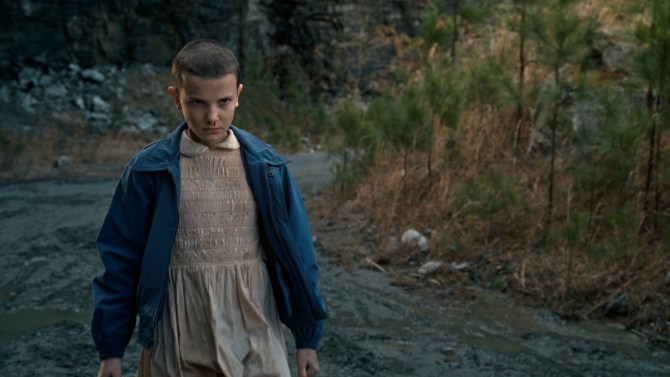 Stranger Things has been generating an incredible amount of attention since it was released on Netflix in early August. The retro science fiction series has been widely praised for its thoughtful storytelling and pitch-perfect Spielberg homages. It’s already spawned both a breakout character in the nerdy friend Barb and an anti-Barb backlash (warning: link contains some foul language). And it’s already been renewed for a second series.

Last week, the Stranger Things buzz also hit the martial arts world when the Brazilian Jiu-Jitsu community discovered that Millie Bobby Brown, who plays the psychokinetically-inclined Eleven in the show, was one of them. The 12-year-old actress, who trains at Phoenix MMA U.K in London, England, recently received her second stripe in the discipline.

Brown is also an avid pugilist. “It’s not a training workout,” she recently told Vulture about the time she puts into her MMA gym. “I train to box. Obviously I don’t want to do it professionally. But I have done some inter-clubs before. It’s at Phoenix MMA U.K., down in London. It’s a great gym, and I have lots of friends. Because I’m homeschooled, I get kind of lonely sometimes. So I like to go to the gym. I do Thai boxing Mondays, jujitsu Tuesdays and Thursdays, and Wednesdays I do boxing with Marc [Plunkett]. He was a world champion at one point. I absolutely love it. I actually have a punching bag right outside in my garden. I’m obsessed with working out. I eat like a pig so it kind of makes up for that.”

Here’s Eleven in action in the ring:

Back to training #phoenixmmauk A video posted by Millie Bobby Brown (@milliebobby_brown) on Aug 3, 2016 at 10:22am PDT

Millie Bobby Brown might be the youngest and most recent actor to take up BJJ, but she’s far from alone in her quest. Movie and television stars have been training in the grappling art for decades now – long enough that there are even some celebrity black belts out there at this point.

Here are five other actors who have managed to balance their stardom with some dedicated time on the tatamis:

Much like Brown, singer/dancer/actor Usher has trained in a number of combat sports over the course of his career. He adopted a dedicated pugilism training program to help him prepare for his role as the legendary Sugar Ray Leonard in the boxing film Hands of Stone (which is finally, after years of hard work, enjoying its theatrical release this summer).

In the midst of all of that intense preparation, Usher somehow found the time and energy to do a little grappling with some of BJJ’s most respected competitors and instructors, including UFC legend Anderson Silva and multiple-time ADCC, World, and Pan-Am champion Andre Galvao.

Action star and excellent adventure haver Keanu Reeves has been involved with a number of martial arts-oriented projects over the years, including his debut as a director, Man of Tai Chi, but it wasn’t until he began preparing to star in 2014’s John Wick that he started to undertake some serious judo and BJJ training.  For help in the latter discipline, Reeves turned to the Machado brothers, memebers of one of the founding families of BJJ in the United States.

In an interview with Fightland, the film’s choreographer, Jonathan Eusebio, praised the star for his ground game, saying that “Keanu has a great aptitude to be a good grappler.”

Here’s a deeper look at that potential and how he put it to work for Wick:

Reeves isn’t the only star who has worked with the Machados. Funnyman Ashton Kutcher is actually one of their most dedicated and beloved students. In a recent interview with TMZ, Rigan Machado went so far as to say that the actor was his favorite student. “He’s a purple belt but he has a really good background in wrestling,” the 8th degree black belt raved. “I think he has a chance to be one of the top guys in jiu-jitsu.”

Machado went on to say that he thinks that Kutcher could take rising UFC star Conor McGregor in a straight grappling match.

Fast & Furious star Paul Walker first developed an interest in BJJ when he watched Royce Gracie dominate the first UFC events back in the early ‘90s. Over the course of his BJJ career, the actor trained with many of the discipline’s most notable instructors and competitors. In addition to being one of Hollywood’s most dedicated athletes, he was also one of the martial art’s most passionate spokespeople.

“I love it. It’s not easy sometimes. It’s a good outlet,” he told Collider while promoting the F&F franchise. “It keeps you competitive, competitive with yourself. You know the guy that’s been tapping you over and over and over again, and to finally tap him once or twice is a sense of accomplishment. And knowing that next time he’s coming at you that much harder, you have to be at your best.”

Walker, who was a brown belt at the time of his tragic death in late 2013, was awarded a posthumous black belt by his instructor, Ricardo Franjinha Miller from the Paragon Brazilian Jiu-Jitsu Academy.

Here’s a look at the late, great Walker in action:

Married… With Children and Modern Family star Ed O’Neill was one of BJJ’s earliest adopters in Hollywood. After much peer pressure from his friend, director John Milius, he agreed to watch his first class in the late ‘80s.

It was not love at first sight. “By the time I got there, John was already in a class with Rorion Gracie,” Ed told Bloody Elbow last year. “I was looking through the window and couldn’t see anything that they were doing. I remember watching and they were just laying on top of each other. I thought it was bizarre.”

But Rorion Gracie offered to roll with him. We’ll let O’Neill himself explain what happened next.

O’Neill has been training ever since that fateful roll. He received his black belt in 2007.

And he fares just a little it better against Rorion Gracie these days.

Who’s your favorite celebrity BJJ practitioner? Do you train in the art? Let us know in the comments?

And, if  you want to train like the stars, you can always check out our selection of BJJ gear in the AWMA online store.