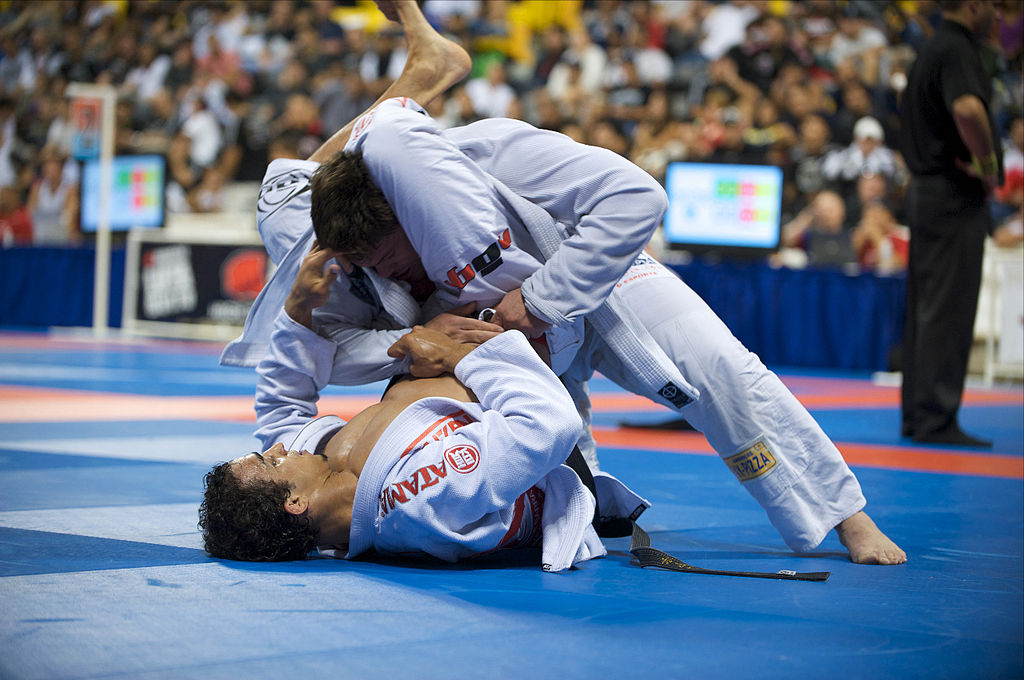 UFC 196, the biggest and most anticipated MMA fight card of the young year, quickly transformed into the most shocking night of the year with two back-to-back high profile upsets on Saturday night. In the co-main event, WMMA veteran and former Strikeforce Women’s Bantamweight champion, Miesha Tate, came back from a certain loss on points to submit Holly Holm in the final minutes of the fifth and final round to become the new UFC Women’s Bantamweight Champion. And in the main event, rapidly rising star, smart mouth, and UFC Featherweight Champion Conor McGregor was at least temporarily silenced when he was vanquished by MMA’s favorite anti-hero, Nate Diaz, with 48 seconds to go in the second round of their welterweight bout.

Both of the victors were considered underdogs going into the fight, both pitted against ostensibly stronger strikers. Both demonstrated their superior grappling skills as their fights wore on. And both won with the rear naked choke, one of Brazilian jiu-jitsu’s most famous and reliable submission holds.

Only the most fervent Nate Diaz fans – and Nate Diaz himself (warning: link contains classic Diaz language and is, therefore, NSFW) were left completely unsurprised by this turn of events.

Like any major cultural moment these days, these wins quickly became the subject of memes. Mixed in with the usual jokes, insults, and gleeful bursts of schadenfreude, an interesting trend started to appear in these riffs on UFC 196: a celebration of all things BJJ.

There was the slightly smug gloating about the superiority of the martial art:

Jokes about what good motivation it was for getting back to the dojo:

A poignant reminder of Nate Diaz’s troubled youth and just how much of a difference BJJ has made in his life:

And even a swipe at how much Conor McGregor had to learn:

The enthusiasm and inspiration from BJJ practitioners is certainly understandable. The art is a cornerstone of what we now know as mixed martial arts – the UFC was originally designed to showcase its effectiveness against other fighting styles –  but it’s often misunderstood and underestimated by the sport’s more casual fans. Striking, with all of its flashy combinations and knockouts, is easy to follow and even easier to get excited about. The intricacies of grappling often require a little more knowledge to appreciate, and all but the most thrilling exchanges on the ground still run the risk of inspiring indifference or boos from audiences.

But even the most grappling-averse MMA fans couldn’t help but get caught up in the action on Saturday night.

Describing the heart and smarts that went into Tate’s last minute victory, in which she worked to get the back clinch, took a risk on jumping to back mount, locked in the rear-naked choke and held on for dear life, MMA Mania’s Andrew Richardson wrote that:

“Tate entered this bout and showed more intelligence then she’s ever shown. Rather than run forward into counters, Tate picked her moments. Though at times she was too passive and it cost her rounds, it also extended the amount of time she had to make something happen and capitalize on her grappling. She did just that.”

In an excellent breakdown of the main event with BJJ black belt Tristan Matheson, Bleacher Report columnist Sydnie Jones wrote:  “Diaz proved on Saturday that a solid Brazilian jiu-jitsu background is as vital as ever in MMA. He was winning on the feet, as well, and McGregor seemed rocked by the time he shot for a double leg toward the end of the second round. Even so, it was ultimately Diaz’s Brazilian jiu-jitsu that halted the juggernaut’s star-making velocity. And what jiu-jitsu it was.”

So it makes perfect sense that these two exhilarating fights would be celebrated by the BJJ community as a reminder of the martial arts’ significance and continued potency in MMA. And it’s not just the BJJ faithful who are eager to get back to the mats and work even harder in their own training in the wake of those wins, either. A whole new crop of white belts has been inspired to give the martial art a try after what they witnessed at UFC 196.

If new Women’s Bantamweight champ Miesha Tate and the Conor McGregor hype train-derailing Nate Diaz have piqued your jiu-jitsu interest, though, there’s one important thing you should keep in mind: While pure grappling is great if you’re interested in sport jiu-jitsu, students who are more interested in self-defense or BJJ for MMA also need to look at the strong standup game that led to those intense grappling finishes. “While jiu-jitsu sealed the deal it was the ability to fight on the feet (punching and defending them) & stop the takedown that made that possible,” MMA instructor and UFC fighter Claude Patrick wrote in a blog for Core Jiu-Jitsu dojo in Mississauga, Ontario. “Jiu-jitsu is a complete martial arts do yourself a favor and get learning.”

What did you think about the fights? Have they inspired you to get learning? Let us know in the comments!

And if you’re looking for new BJJ gear and learning materials, check out our selection of gis, belts, books, and more here.