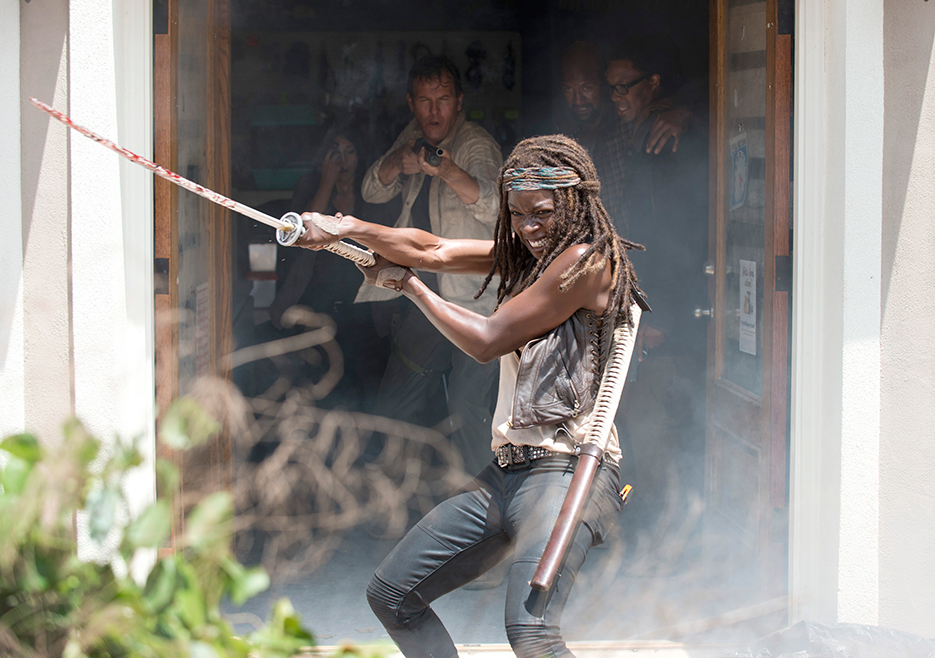 Almost exactly four years ago, The Walking Dead’s resident katana-wielding heroine made her television debut. Michonne, the long-anticipated favorite from the original graphic novels appeared in a brief scene in the final moments of the show’s second finale on March 18, 2012. Immediately after it aired, comic book creator and executive producer Robert Kirkman announced that Danai Gurira would be playing the role.

Days after the world – and Gurira herself – found out that she was about to become Michonne, The Hollywood Reporter caught up with the playwright and actress, then best known for her work on Treme, to ask her about her new gig.

“She’s so amazing,” Gurira said of her new character. “I’m excited to embody that and be a bada**. I’ve always yearned to do that.”

Although none of her film and television roles had given Gurira much of a chance to show her tougher side, the actress did have a background in the broadsword, stage combat and fitness kickboxing going into The Walking Dead. “I got an MFA in acting from NYU and part of our training is to learn how to use swords in combat situations in a performance and Shakespeare plays where you have to fight. I’ve done a bit of that. It was all theater training work. In terms of martial arts, part of how I exercise is kickboxing but I’m not a black belt or anything. But I love a good kick and a good punch,” she told the Reporter.

She did, however, suspect that the kitana training she was about to undertake as part of her preparations to play Michonne would be a challenge. “I definitely think this is on a whole other level, so I’ll be learning how to wield that thing all anew.”

With a tight timeframe between her original casting and the beginning of filming for season three, Gurira jumped into training, spending three intense weeks with a sword master to beef up her skills and develop a style that made sense for the self-taught Michonne (“She wasn’t trained in the bamboo forests of Japan,” the actress said of her character’s background. “She figured it out.”). She then fine-tuned what she’d learned with a stunt coordinator on set.

As she’d predicted, her katana training was, in fact, on a whole other level. “I’ll tell you right now, the broadsword is nothing compared to the katana,” she told the L.A. Times in October of that year. “I watched a little video of the broadsword being tested against the katana just in terms of little things that have to do with severing armor or whatever, and the katana was so much more bad-a**er than the broadsword. The broadsword was useless almost – it was like, ‘Oh, you Brits, you failed. Japanese 1, Brits 0.’ It was like learning from scratch because it is not the same weapon.”

Learning to work with the sword wasn’t the only challenge. Becoming physically fit enough to use it during scenes was also part of Gurira’s training. “It was extremely intense at the beginning, extremely intense. I did not know those muscles were in the body. It hurt and it was exhausting… I work out but this was just a whole other thing. You do your little dumbbells and you’re getting somewhere but the katana just totally will break you. And I love it for that. But it was a lot of work,” she told Red Eye Chicago that same month. “It’s very enjoyable and exhilarating but it’s extremely intense and there’s so much to learn all the time.”

And she hasn’t stopped learning since. Four years and four seasons later (season six is currently airing Sunday nights on AMC), Michonne, who is considered by some fans to be one of the potentially “un-killable” characters on a show where anyone can go at any time, is still going strong. And so is Gurira, who continues to keep in zombie-fighting shape through a mix of cardio, Pilates, swimming, and her favorite Jillian Michaels DVDs. She also keeps a set of training swords in the trunk of her car just in case she has time to squeeze in a katana session on the go. “I’ve trained in my garage, my living room, in a pool and even an underground parking garage,” she told Self Magazine last February.

Gurira even pulled them out of her trunk for an impromptu lesson during a commercial break on LIVE With Kelly and Michael in 2014.

Maintaining a high level of physical fitness is important to the Walking Dead star, and not just because she likes to be able to handle Michonne’s trademark solid steel katana – which, she estimates, weighs a good five pounds – with relative ease on set. “Taking care of my body, knowing I’ll never get another, is one of my top priorities,” she told Self. “I’m happiest when I feel strong. And I do what I need to do to get there.”

Interested in learning more about the katana, or maybe getting one to carry around in your car like Danai Gurira? Check out our selection of swords and training aids in our store! We even have the official Michonne sword in stock.