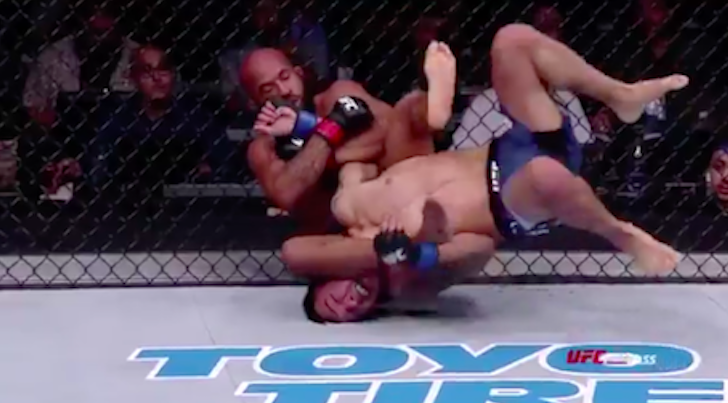 Last Saturday, October 7, long-reigning UFC Flyweight Champion Demetrious “Mighty Mouse” Johnson further cemented his status as one of the greatest MMA fighters of all time with a stunning submission victory over Ray Borg at UFC 216. Just over three minutes into the final round of their championship fight, Johnson lifted his opponent and executed a textbook suplex… which he transitioned into a textbook armbar before Borg had even hit the ground. Here’s the move in slow-motion to give you an idea of just how impressive this move was.

You’ve seen the mid-air arm bar in real time, but have you seen it …

Inspired by DJ’s incredible demonstration of mixed martial arts skills, precision, timing, talent, and smarts, we’ve been thinking about other MMA submission victories that have blown our martial arts-loving minds over the years. While few, if any, are quite as beautiful and exciting as what Might Mouse pulled off last weekend, we did come up with some pretty thrilling runners-up. Here are five of our favorites:

Before she became one of the most exciting fighters in the UFC – and the current #1 contender in the promotion’s strawweight division – even before she was one of the most intriguing competitors in season 20 of The Ultimate Fighter, Rose Namajunas began her professional MMA career in the women’s only promotion Invicta FC. In her second pro fight, she stole the show at Invicta 5 (April 5, 2013) with a smooth, assured and ultimately deadly flying armbar against an advancing Kathina Lowe just 12 seconds into their bout.

Do you like your flying armbars even smoother, more precisely executed and faster? You’re in luck! “Surely the most spectacular flying arm bar in MMA history belongs to Rumina Sato, who dashed across the Shooto ring and finished poor Charles Taylor only six seconds into the first fight of Taylor’s career,” Jonathan Snowden and Kendall Shields wrote of the 1999 submission victory in The MMA Encyclopedia. “It remains perhaps the most amazing submission finish ever seen in MMA – and given the look on Taylor’s face as he turned to his corner, maybe the most demoralizing career debut, too.”

Even if it had been the result of an everyday, average submission attempt, Nogueira tapping to Frank Mir at UFC 140 would have been a historical event. It was, after all, the first time that the PRIDE legend tapped to anybody in professional MMA competition. The way that Mir scored that victory, though, makes his win downright epic. Mir was coming dangerously close to finding himself on the losing end of a TKO victory at approximately 3:30 into the first round of the fight (if you listen to the commentary, you’ll note that UFC commentator Joe Rogan already believes that he’s unconscious) when Nogueira switched from strikes to a guillotine choke. Mir somehow managed to regain his wits enough to defend the choke, reverse positions and maintain an impressively smooth ground game while locking in a kimura on Nog – and holding un until he was forced to tap.

Jon Jones’s UFC Light Heavyweight Championship-defending victory over Lyoto Machida at UFC 140 might not be as flashy as the other submissions on this list, but what it loses in dramatics, it more than makes up for in subtle but deadly stealth. Thanks to issues of leverage, the standing guillotine choke is hard enough to pull off in Brazilian Jiu-Jitsu and submission wrestling. When you add the danger of strikes to the mix, it becomes near impossible – or very unwise – to attempt at all in MMA. But Jones makes it look easy as he swiftly switches from the clinch to the standing choke.

Over the course of his long and storied MMA career, we’ve become more accustomed to watching PRIDE and UFC legend Anderson “The Spider” Silva be the perpetrator of brilliant BJJ-fueled sneak attacks. But he was on the receiving end of one of the most famous submissions in MMA history at PRIDE Shockwave 2004 on New Year’s Eve. That was when Ryo Chonan, seemingly out of nowhere, dropped into a leg scissor takedown and swiftly transitioned into a heel hook that left a stunned Silva with no other option than to tap.

What did you think of Mighty Mouse’s big win? Do you have a favorite MMA submission that’s not on the list? Let us know in the comments!

And check out our online store! We’ve got all of the MMA training gear you’ll need to work on your own flashy submission  attempts.