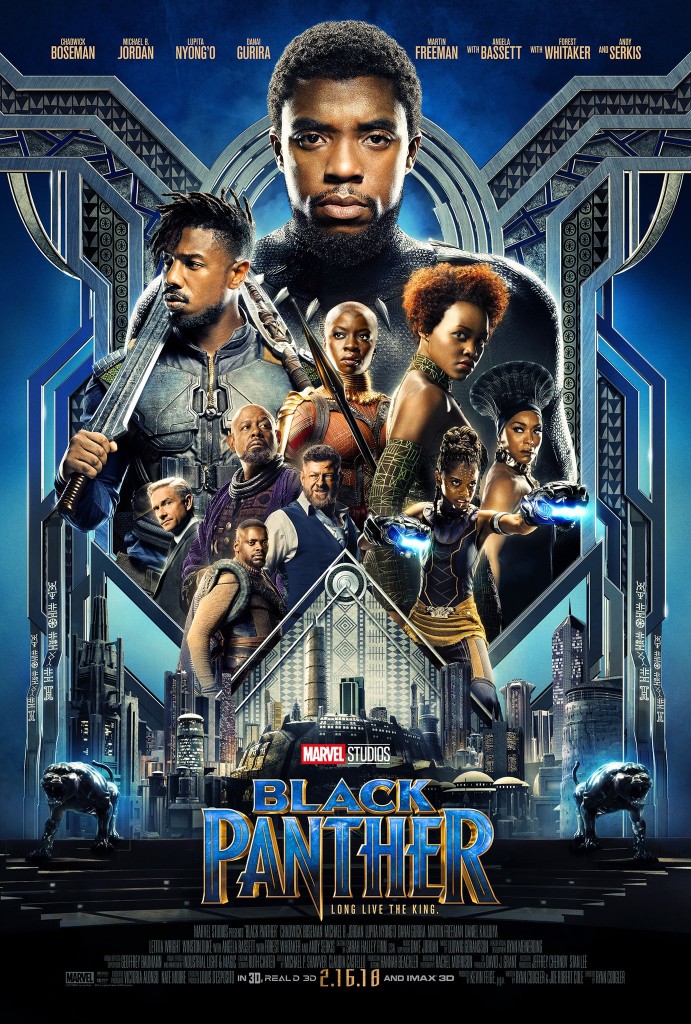 The first full-length trailer for Marvel’s Black Panther feature film premiered earlier this week to a significant amount of buzz. And for good reason. The 2 minute sneak peek at the film, which hits theatres of February 16, looks and sounds amazing. From the soundtrack, to costumes, to the stunning visuals, to the incredible star power of its large and talented cast, everything about Black Panther is impressive so far. It also promises to be an important step forward in Marvel’s – and Hollywood’s – efforts to better embrace diversity and representation. But there’s another reason that we wanted to specifically address this particular film and this trailer in the AWMA blog this week: for martial arts fans, Black Panther has the potential to provide us with Marvel’s most thrilling action sequences yet. The brief hints we see in the trailer are definitely off to a good start:

Part of the reason that this film has such promise is its source material. In the comics, the Black Panther, whose name is  T’Challa, is the learned and cultured ruler of the fictional African nation of Wakanda. He is a renaissance man whose impressive range of studies includes a significant background in a number of combat styles.  “Black Panther is a master of most forms of African martial arts, as well as many other disciplines he has trained in since spending more time away from Wakanda,” Fred Blunden wrote for Screen Rant in 2016. “During his association with The Avengers, he has trained with Captain America and the two men have learned many of each other’s skills.” T’Challa, he also notes, goes on to master the use of blades in the later issues. And his on-screen debut in last year’s Captain America: Civil War certainly suggested that the cinematic Marvel universe intended to faithful to this characterization:

Given the martial arts backgrounds of many of Black Panther’s supporting casts, thanks to their dedicated work on other projects, there’s a good chance that the rest of the characters just might be able to keep up with T’Challa. Michael B. Jordan, for example, who will play one of Black Panther’s main enemies in the film, is no stranger to intense physical preparation for a role. The actor started training for his starring role in 2015’s Creed while he was still on set for The Fantastic Four by watching his diet and putting on muscle. As soon as he filming wrapped, Jordan significantly upped his physical activity, doing a mix of strength, cardio, and boxing sessions two to three times a day for almost a year before filming. And, according to the boxing trainers that he worked with, he got quite good at the sweet science during that time. “Michael can throw down, man!” Gabriel Rosado, a middleweight and light middleweight boxer who also had a part in Creed, told TMZ. “If you sleep on him in the street, he might put you to sleep. He has some hands on him.” (For more information on Michael B. Jordan, see our 2015 blog on his Creed training.)

Danai Gurira, the actress and writer who plays Okoye, the head of the Dora Milaje, Wakanda’s all-female special forces unit, took up the katana when she was cast as Michonne on The Walking Dead and has been working of mastering the weapon ever since. She even keeps a set of training swords in the trunk of her car so that she can practice on the go. “I’ve trained in my garage, my living room, in a pool and even an underground parking garage,” she told Self Magazine in 2015. (For more information on her Walking Dead training, see our 2016 blog on Danai Gurira.) Here’s a brief glimpse of her practice in action behind the scenes on LIVE With Kelly and Michael:

Perhaps no one worked harder than the Black Panther himself, though, Chadwick Boseman. The talented and extremely dedicated actor, who plays T’Challa, has said that he believes all performances are physical, and he researches and prepares accordingly. “There’s just as much gymnastics, just as much spectacle in the spoken word as there is in the physical body. The tongue is a muscle, too. It really doesn’t matter whether I’m running or doing capoeira or I’m speaking long speeches, it’s an exercise regardless,”  Boseman told the South China Morning Post in May, 2016. “The physical part is what makes it fun for me and helps me get inside the characters. The spirit of the character is going to begin to come out.”

For T’Challa, who is an intellectual fighter, this included work on both the martial arts themselves, as well things like agility training, which Boseman believed would typify his smart style. “I wouldn’t say he’s a ninja, but he does employ some of those aspects as well,” Boseman told Entertainment Weekly  in 2015.

Boseman added that Black Panther’s skills include “some animal forms, but not just cat. He could be a snake, or various different style. Obviously there’s an opportunity to do some capoeira.”

For both Captain America: Civil War and Black Panther, Boseman took lessons in capoeira, karate, kung-Fu and jiu-jitsu. He has also worked with Marrese Crump.

Crump, who is a talented actor in his own right, appearing in films like The Protector 2 and Sultan, is a noted martial artist, martial arts instructor, and author. According to his IMDb bio, he began training when he was 7 years old and has studied Muay Thai, capoeira, boxing, Tae Kwon Do, and Filipino Martial Arts. He is the only American protege of Ong Bak creator Master Panna Rittikrai. In other words, Boseman was in very good hands for Black Panther. And, if this brief taste of their training is any indication, we can’t wait to see the results.

“The purpose of training is to tighten up the slack, toughen the body, and polish the spirit.” – Morihei Ueshiba #blackpanther #bts #fma #sanucesryu : @realaddison : @marresecrump

Are you excited about Black Panther? What do you think of Chadwick Boseman’s skills? Let us know in the comments!

And check out our online store. No matter what mix of martial arts brings your character out, we’ve got the training gear and educational materials you need.