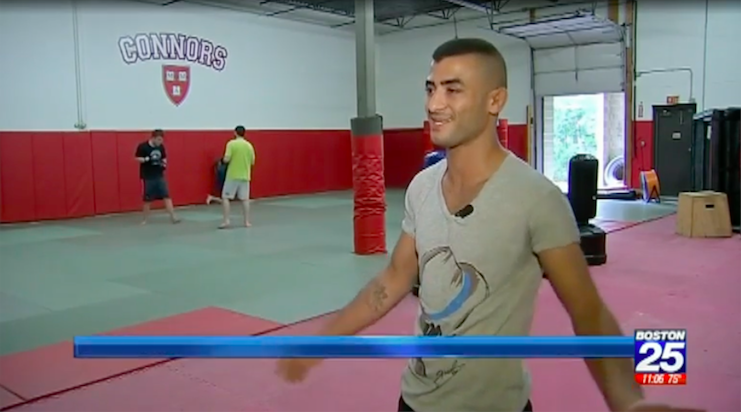 Shortly after moving to Massachusetts from Egypt, Ebrahim Gawargi got a job at a local gas station. Then he joined a martial arts gym. The latter was supposed to be a hobby, something fun to do in his spare time. Now he’s become a viral sensation for using the skills that he picked up there on the job.

Gawargi, who trains three to four hours a day, put his growing skills to the test when a robber walked into his store and tried to grab a significant amount of money right out of his hands.

“Surveillance footage shows the man, who was wearing a dark gray sweatshirt, enter the store and try to grab some of the cash. Gawargi was quick to respond, hitting the man repeatedly,” Lucia I. Suarez Sang reported for Fox News.  “At one point Gawargi was able to grab the man’s sweatshirt, pulling it off before jumping over the counter.”

The young martial artist and hero told the local Fox affiliate, Boston 25, that he’d never imagined testing his training at work, but “When he attacked me, I had to do something.”

Here’s the full report from the station, which shows Gawargi in action both at the store and at the gym:

Much like the police officer interviewed for the report, we don’t recommend trying this at home. One of the most important self-defence lessons that you’ll learn in any good martial arts program, after all, is how to effectively remove yourself from a situation so that you don’t have to face danger like Gawargi did. But we do admire both the bravery and the discipline that he demonstrated in defending his store without permanently harming his assailant.

And we understand the appeal of viral stories like Gawargi’s. Or David Pugh, a 55-year-old who gained similar attention last winter when he was able to defend his teenage son and puppy against four masked attackers who had broken into his home with the aid of his Krav Maga training. (Warning: The photos contained in Pugh’s story are somewhat graphic in nature.)

From an altruistic perspective, it’s always heartening to see something that means so much to us have a positive impact on the outside world. We know how it’s changed our own lives and those of our teammates, both in and out of the gym, but it’s great to see proof of both our skills and the strong moral code that our training instills in us doing good in society.

It’s also why it’s so wonderful to see stories about the ways in which self-defence programs are changing lives outside of the martial arts world, including outreach programs like the free lessons that Dr. Dale Eberwein, a 5th degree black belt in kenpo, is currently offering in libraries in Washington. Or the Montreal police officer who is helping women gain confidence through his self-defence seminars. Or even Raleigh County’s bully-proof camp which is currently equipping students with martial arts techniques that will help them gain confidence — and defend themselves, if it becomes necessary — to face the forthcoming school year.

Finally, there’s a slightly less pure of heart — but certainly understandable — reason that these stories intrigue us: Even though we know that a good martial artist will only use their training in the outside world when it is absolutely necessary, a lot of us have probably wondered just how well we would fare if it happened to us. How would our skills shape up against a serious threat? How would our mental state? In addition to showing the outside world the importance of our martial arts training, these kind of stories allow us to live vicariously through these heroes a little bit.

Of course we all know, at the end of the day, that taking our training to the streets should only be used as a last resort. None of us really want to be faced with a real life situation like any of the above. We all hope that we will only have to test our skills in a safe and supportive environment like sparring sessions at the gym or competitions.

It is nice to occasionally be reminded, though, that our training has the ability to help keep us calm, level-headed, and safe if the situation ever arises. As long as we also remember to be responsible with what we know.

Have you taken self-defence training? Have you ever been forced to use your martial arts skills to protect yourself? Let us know in the comments!

And don’t forget to check out our online store for all of your self-defence and martial arts training needs.