Of all the Chinese weapons it’s the one that peaks my curiosity the most. Such a strange combination of characteristics. When I first saw a Chinese spear I thought somebody had made a mistake. 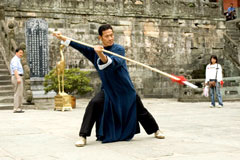 The shaft looked too thin and pliable. The spearhead too small. Even the red puff at the end of it seemed out of place.

Then I saw somebody actually do a form with it and the power of the weapon became pretty apparent.

I never thought that you could bend the spear in such a way. To me, a spear was something I saw a Roman soldier holding in a movie about Jesus. This weapon I was seeing in action was something else all together. 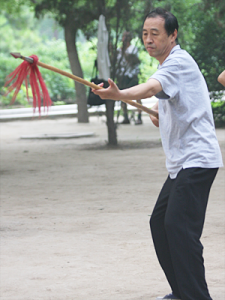 The shaft bends with the motion of the weapon. This allows the spear to bend around another weapon that might be blocking its way. The head of the spear reaches for its target like the sting of some colossal insect.

The red puff at the base of the spearhead is not only there to confuse the opponent but also to make sure that blood does not travel down the shaft making the weapon slippery. 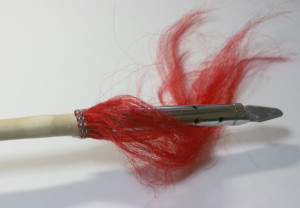 The fact that the weapon is made out of bamboo gives it incredible flexibility and speed. Reach and speed are the two main advantages of the spear.

When the spear is held at its end and the practitioner spins, the speed created at the head of the spear can generate tremendous power. So that the blow can be devastating, not to mention the fact that the head is also razor sharp. It’s like holding a scalpel at the end of a long pole.

When wielding the spear the practitioner takes on some of its characteristics. The speed, the flexibility, the whipping action. 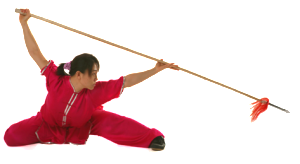 I’ve never been crazy about wushu performances. I find them to be a little too much like a dance for me sometimes, but I’ve included some here because the body control and athleticism are outstanding and warrant our admiration.

There’s no better way to describe the motion of the spear than to see it in action.

When I was studying Chinese martial arts there was a power called “fright power.” What it meant was that when somebody saw you do your moves they could feel the danger of the move just by standing close to you. They would want to take a step back to remain safe.

The spear certainly conveys this power, perhaps better than any other weapon.