Classic Fight Scene of the Week

A few months back I got into this friendly argument with a coleague at work about what was the most “bad ass” line of all time in a martial arts movie.

He argued that it was “Sweep the leg!” from the Karate Kid. I have to admit that’s pretty good. But still I thought that “You have offended my family and you have offended the Shaolin Temple” from Enter the Dragon was pretty near the top. 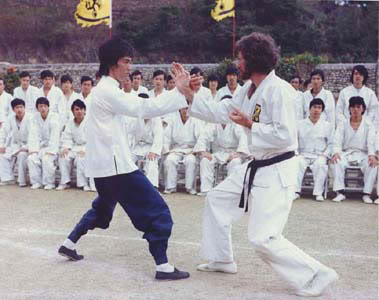 Of course I had forgotten the line from the scene that we’re showcasing this week. “Boards don’t hit back.” Also from Enter the Dragon. It’s such an awesome line that years later, another movie, Bloodsport, gave a homage to Enter… by having another character utter a rendition of it. “Bricks don’t hit back.” 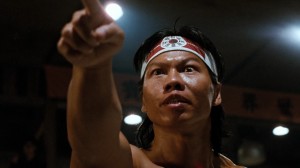 This time the line is delivered by the villain. Which coincidentally is played by Bolo    Yeoung who also happend to be part of the cast of Enter the Dragon.

Anyway, this week we feature the O’Hara fight from Enter the Dragon.

The scene is great in so many ways that they’re difficult to sumarize so I’ll just give  you some of my favorite tid bids of information.

First, you can see all sorts of elements of Bruce’s fighting philosophy in the fight. He leads with his right hand and yet he was a righty. He did this because he believed in an unorthodox stance to keep you strong hand up front.

You can clearly see his economy of movement in the first few hits. There’s no wasted action. The hand doens’t move back, just like in the one inch punch. It goes straight to target.

Then he delivers two spinning back kicks with the left leg. I don’t even know how he does that, having tried many times to do that kick with my weak leg and failing miserably.

And of course, another one of my favorites is the side kick towards the end of the fight that sends O’Hara into the seats. The side kick was also Bruce Lee’s favorite kick.

I heard a story at some point that the person doing the acrobatics is not Bruce but some Korean kid he got. I’m not sure how true that is. 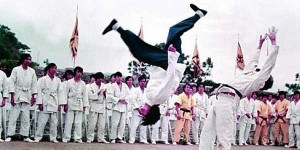 One way or the other it doesn’t take away from the enjoyment.

And so without further ado, the O’Hara fight scene from Enter the Dragon: