THE MARTIAL ART OF CINEMA

Yesterday afternoon I caught the ending of Akira Kurosawa’s Ran on the Sundance Channel.

It was the climactic battle scene when the two sons of Lord Hidetora played by Tatsuya Nakadai, trap him in a castle and burn the whole thing to the ground.

Hidetora exits the burning building in a daze, right through a mass of spear wielding soldiers who retreat, unable to strike down their former lord. The soldiers wear yellow and red flags to represent their armies. Hidetora’s massacred guards lay strewn across the courtyard. 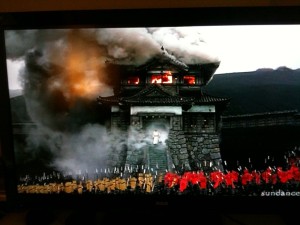 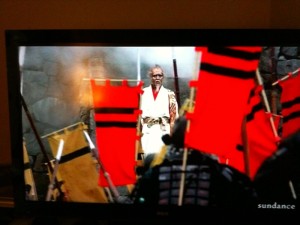 For those of you who don’t know, Ran is an adaptation of Shakespeare’s King Lear, a play the Bard wrote at the end of his career, a play written by an old writer, full of wisdom and fire and the genius of age. Kurosawa also made the movie later in life. I suppose you can say the same thing for the film.

It’s also one of his few samurai movies in color as opposed to black and white.

This particular scene was shot on the slopes of Mount Fuji in Japan, and the earth beneath the actor’s feet is an ashen black from the volcanic rock.

The composition of the shots, the combination of color, starkness, fire, smoke and figures create a poetic language that is astounding in its simplicity, clarity and depth.

Note the shot of Hidetora coming down the front steps of the keep. 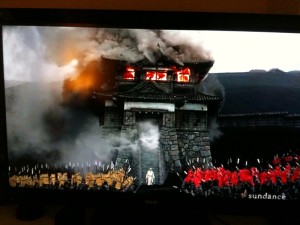 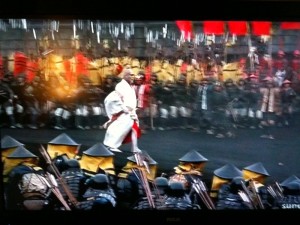 See how the structure of the building itself mirrors the face of the lord. The billowing gray plume of smoke echoes the hair – the fire, only visible through those windows, equals the eyes – and the door agape, just like Hidetora’s gapping mouth, from which the tiny figure emerges like some lost anima, like the lord’s own sanity being puked out into the world like an aimless spirit.

It really reminds me of the power cinema can have in the hands of a master and how a well chosen image can speak chapters of philosophical dribble in a much more direct way, because it bypasses our conscious mind and goes right into the subconscious which is where emotion resides. 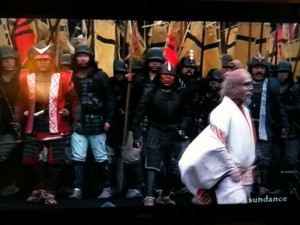 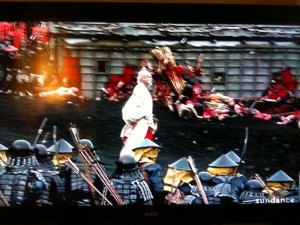 Remember that Ran was made in 1985 and there was no CGI or crazy special effects back then. What Kurosawa had was men in armor, flags, wind, the black sands of Mount Fuji and a castle on fire…oh and of course, his imagination. Imagine the coordination it took, the cheer force of will to get these shots done, just perfect as they are. Imagine the fun!

Mind you, these are pictures of my TV screen taken with my phone. They don’t really do it justice. 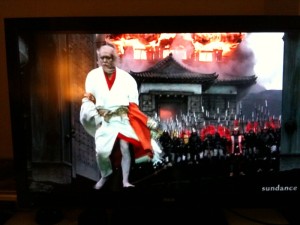 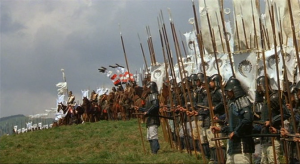 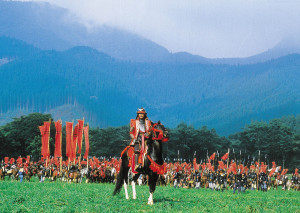 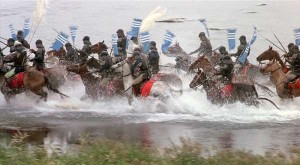 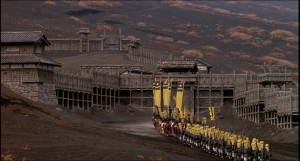 Wouldn’t it be great if genius worked like that for everybody, almost out of coincidence?

I guess some of us will never find out.

If you haven’t seen Kurosawa’s films I highly recommend them. Here are some masterpieces, just to name a few: Yojimbo, Throne of Blood, Rashomon, Hidden Fortress and Seven Samurai, the inspiration for The Magnificent Seven and Star Wars and one of the greatest martial arts movies of all time. Enjoy. 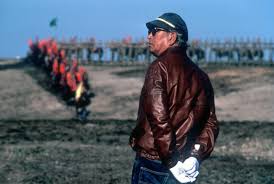