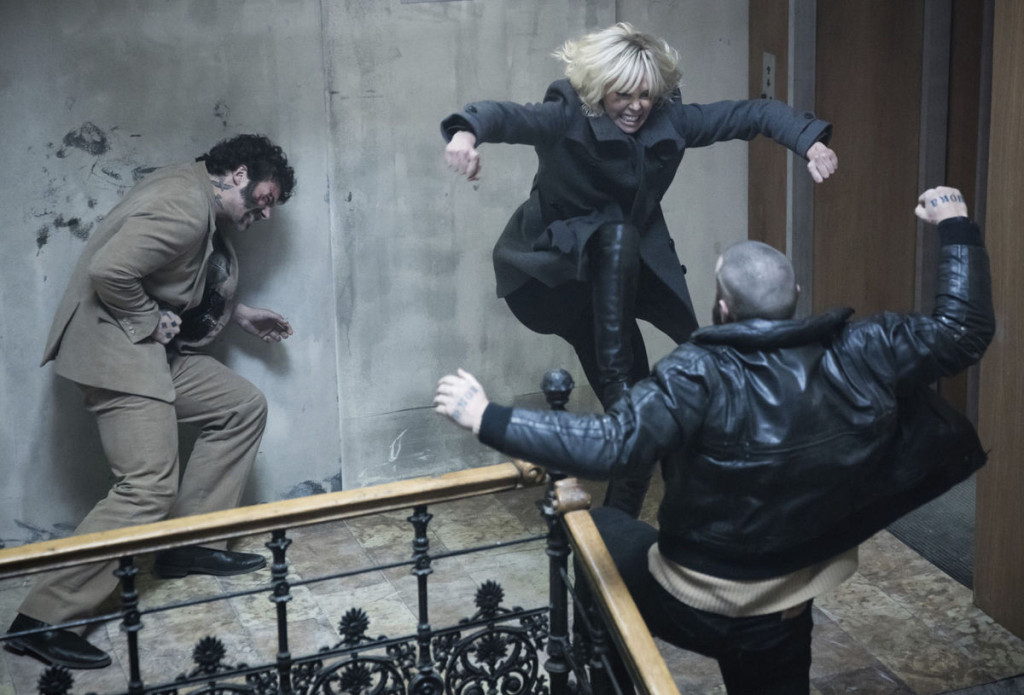 Atomic Blonde has only been out in theaters since last Friday, but its key fight scenes are already achieving legendary status. They’re being praised in reviews and referenced in articles about the greatest action scenes of the 21st century. The film’s mind-blowing 7 minute fight scene, which takes place in a crumbling apartment and almost appears as if it was shot in one take, is even the subject of its very own GQ article in which the film’s director, David Leitch (one of the action visionaries behind the John Wick franchise) breaks down all of the hard work, skill, and talent that went into pulling it off.

While discussing the work that Atomic Blonde’s star, Charlize Theron, put into preparing for this scene, the interviewer asks if her background as a dancer helped her perform in such detailed and physically intense scenes. Leitch believes that it did. “Fight choreography has far more in common with dance choreography than it does with actual martial arts. You learn martial arts techniques but those are just the movements for the choreography. You’re working with a partner in choreography. You’re working on timing. Having the dance background was invaluable.”

While having a mind and a body that have been trained to perform elaborate choreography have definitely helped Theron become one of the most intriguing action heroines of our time, it would be unfair to dismiss her performances in blockbusters like Aeon Flux, Mad Max, and now Atomic Blonde as the work of a dancer with a few martial arts moves tucked in her back pocket. Martial arts and martial arts training have influenced everything about Theron’s action-oriented performances from the moves themselves to the philosophy behind all of the hard work that she puts into preparing for such roles.

In a recent interview with MMA reporter Karyn Bryant for Fox Sports, Theron talked about how her love of mixed martial arts goes hand in hand with her love of action and stunt work. “I think there is a real art to fighting,” the actress, who is a regular at UFC events, said. “There’s something about the discipline and the character that it takes, and the amount of years that it takes to really fine tune your instrument, to be able to do as much as these guys and girls do.”

Theron brings this same drive to her own action performances. In preparation for Aeon Flux, for example, she took it upon herself to research capoeira and started taking lessons in the Brazilian martial art so that she’d be better prepared for doing much of her own stunt work when it came time to shoot. For Atomic Blonde, where she plays a lethal MI6 agent, Theron put in four hours of martial arts training a day for two and a half months before the cameras started rolling. “That was hard because my body took a real beating,” she admitted to Bryant. “And then you kind of get past that hump and your body turns into, you feel like a machine.”

Theron was such a well-oiled machine by the time that Atomic Blonde began filming that it actually inspired the director and choreographers to reimagine the way that the movie’s now famous fight scenes would be shot. While they had originally planned to film the star executing a few moves at a time and then piece them together in editing, they were suddenly able to trust her to memorize and execute 20 move sequences and eliminate much of the need for a stunt double. “Charlize did 98 percent of her own action including fighting, running and those kinds of things. When it comes where she has to fall down stairs or swing from a height — that she can’t do insurance-wise,” stunt coordinator Sam Hargrave told the Hollywood Reporter.

Here’s a video of Charlize Theron in action, both in training and on screen:

James McAvoy, who is on the receiving end of some of these stunts, told GQ that getting his butt kicked by her “was a privilege and an honor. She really is fantastic in this film, she really is something quite spectacular. Watching her do what she does in it, I think it’s—you know, I’ve worked with Hugh Jackman and Angelina Jolie, and she’s up there. She is one of the most talented physical actors from a dance background all the way through all the fights and stuff.  David Leitch, who directed this, would also say she was up there as one of the most physically gifted actors that he’d ever worked with, as far as fight capability and all that stuff. He was like ‘Charlize is just bang up there with them, you know?’”

While stunt coordinator Hargrave is quick to praise Theron’s natural abilities, he’s even quicker to point out that what truly makes her one of the current greats of action cinema is the same thing that makes any martial artist truly tick: discipline and dedication. “A lot of it is natural, God-given talent that she was born with,” he told People Magazine. “She’s just a very coordinated and athletic person to begin with, but I can attest to the hard work that she put in, and that’s what separates the good ones from the great ones, in my opinion. Hard work was one of the bedrocks of her training, and I think it really shows in the final product.”

Are you a fan of Charlize Theron’s action work? Has martial arts inspired you to work hard in other areas of your life? Let us know in the comments! And check out our online store. Whether you want to be an action hero or the kind of martial artist who inspires them, we’ve got all of your martial arts supplies needs covered.