7 SKILLS I WISH WERE TRUE FROM MARTIAL ART MOVIES

I was watching Old Boy recently, a great martial arts flick from Korea.

A man is incarcerated in what looks like a hotel room for years. He doesn’t know why or who’s doing it. They feed him every day. he’s sedated while they clean the room.

In the middle of all this he starts to train in the martial arts. He does it all by himself in that room.

One day he’s released. He gets into all sorts of fights and wins. Apparently the training he did all by himself paid off. 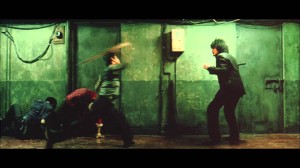 That got me to thinking. There’s a lot of things in martial arts films that I really wish were true.

1. I wish I could learn techniques from a book.

In Crouching Tiger Hidden Dragon the protagonist learns the techniques of Wu Dang Mountain by reading a secret manual stolen by her master.

She’s better than anybody she faces, except the real master of course.

Wouldn’t that be fantastic.

I must own hundreds of martial arts books. Imagine I could master those styles just by reading. I would know more martial arts than anybody alive.

Of course, all of us who have actually studied know that even though a book or a video can have very useful information it’ll never take the place of actual training.

Sometimes though, I do wish things were that easy.

2. How about having a computer download the information into your brain.

Hell, forget martial arts, learning anything like that would be the ultimate rush.

You don’t even have to spend the time reading. I can just have it implanted, like putting on a sweater. It’s the ultimate geek dream. Make me a master simply by plugging me in and downloading everything I would ever need to know.

3. Here’s another one of my favorites. Somebody teaches me something that appears to be unrelated, like waxing a car, and it turns out I’m actually learning an essential fighting skill nad. 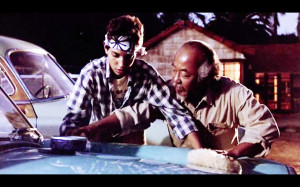 Ever since The Karate Kid we’ve all fantasized about a master that can teach us the martial arts without actually getting into the nitty gritty of it. That they can teach us by osmosis.

I don’t know how many times I painted the fence behind my house in a horse stance thinking it was making me a better martial artist. It probably was, but that’s not the point. It’s never that cut and dry.

In that scene from the Karate Kid, when Mr. Miyagi actually reveals the truth of his teaching, Daniel immediately blocks all of his punches and kicks. Even thought he didn’t even know he was learning to do that.

Wouldn’t that be grand? I’ve never even seen anybody do a block right the first time out, let alone stop anybody from hitting them. Maybe Mr. Miyagi knew something we didn’t.

4. Here’s a good one. First you get angry. Then you can fight better than you could before.

How many times have we seen this in a movie? The hero’s losing the final fight and then the villain does something awful, like kick his daughter or something. Then the hero gets a second wind and proceeds to kick the bejeesus out of the bad guy. 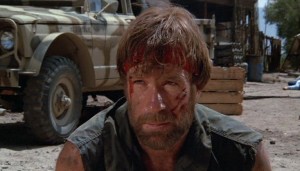 If you’ve been in the martial arts long enough you know that anger usually makes you more erratic and less focused. It can impede your ability to stay relaxed and ready to fight your best.

It does make sense of course when you see it on the screen. It’s the way we wish we could behave.

5. Along that same note. How about this one? Alcohol can make you better. Especially if your style is the drunken style.

Alcohol can actually relax you if taken in moderation but I’ve never seen anybody fight better when drunk. That’s impossible.

Even if you do get into a fight drunk and you don’t realize you’re getting your behind kicked, the next day you’ll certainly notice. 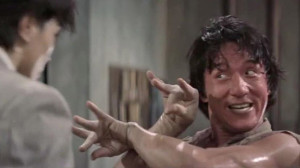 Drunken kung fu is certainly a skill and it involves sensitivity and the ability to not oppose force with force, but you don’t actually do it while drunk, it’s just a way of describing a state. You fight AS IF you’re drunk. So that your body is pliable and your center is hard to find for your opponent.

6. Here’s my favorite. The death touch! 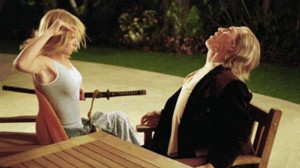 I love that scene in Bloodsport when the judges ask Jean Claude Van Dame to demonstrate the death touch and he hits a pile of bricks and breaks the one at the bottom. 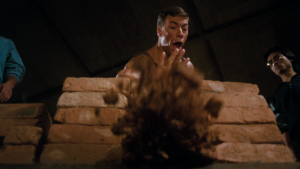 I mean, who wouldn’t want to do that? It’s like using the jedi mind trick. We all want it. It’s just not true.

How bout that technique where you hit the opponent in four or five pressure points and it paralyses them? That has to be one of my all time favorites.

Pressure point attacks are real and some of them do numb your limbs when done right. But I don’t think you can actually paralyse a person’s entire body by hitting several points in sequence.

The best thing about it is that there’s a counter technique to release the person from the paralysis, just like taking an alka seltzer for your upset stomach.

7. And here’s the ultimate fallacy about kung fu movies: If you’re right and your soul is in the right place, you’ll win.

I remember reading in a karate book once that the fighter who’s right is meant to carry the day, because the universe aligns itself with the righteous person.

That’s nonsense. One thing has nothing to do with the other and the universe doesn’t operate this way. We keep wanting the universe to have a brain like ours but it doesn’t.

The people who are in the right sometimes lose. That’s the way of the world. No amount of well wishing can account for the outcome of a fight.

Train hard and be prepared for anything.

Of course, being right does help you fight harder. Simply because you know you’re defending truth. That should count for something. 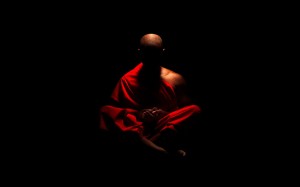 As martial artists, it’s fun to consider the world of the movies, but when it comes to the reality of actual combat, nothing substitutes for hard work, experience, and the teachings of a true master. Don’t forget that. There’s no magic pill.

Training shouldn’t be easy. It is the hardships that forge you into the martial artist you are meant to become. So go to the movies and dream, but at the club, like Iggy Azalea says, work, work, work.