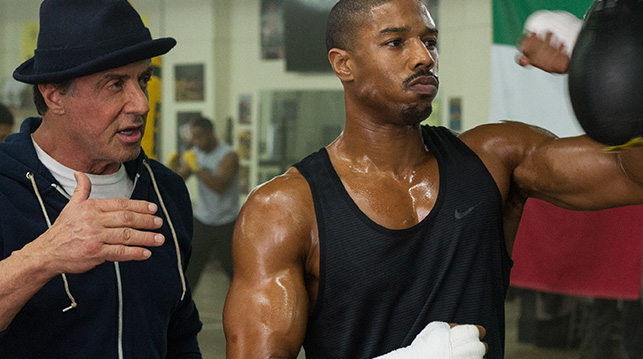 Stallone and Jordan in Creed, Photo from Warner Bros.

As a proud Philadelphia-based business, Asian World of Martial Arts has a soft spot for Philly’s favorite fictional son, Rocky Balboa. So it was nice to see Creed, the latest installment in the Rocky film franchise, have such a big night at the Golden Globes on Sunday.

Rocky himself, Sylvester Stallone, won the best supporting actor trophy (officially and awkwardly titled “Best Performance by an Actor in a Supporting Role in any Motion Picture) for his work in Creed. Stallone was previously nominated for Best Motion Picture Actor-Drama and Best Screenplay for the original Rocky at the 1977 edition of the awards show, but this was his first Globe win.

Stallone acknowledged that early recognition from the Hollywood Foreign Press in his touched but flustered acceptance speech. “This is kind of incredible,” Stallone said. “The last time I was here was 1977. I was kind of hit by tumbleweeds. It was a long time ago. It was a different situation. And the view is so beautiful now.”

The actor went on to thank his family and many of his colleagues who have helped him bring Rocky to the screen over the past four decades. He gave a special shout out to Rocky producers Irwin Winkler and Robert Chartoff, saying that the latter “actually mortgaged his house and took a chance on a mumbling actor and gave me the shot of a lifetime.”

Stallone finished off his speech by saying “Most of all, I wanna thank my imaginary friend Rocky Balboa for being the best friend I ever had.”

Apparently shocked and caught up in the moment, Stallone forgot to thank his co-star Michael B. Jordan and writer/director Ryan Coogler during the broadcast portion of his speech. This was a shame, given that Jordan’s magnetic work as Apollo Creed’s son, Adonis, contributed so much to Stallone’s performance as Balboa, and given that it was wunderkind filmmaker Coogler’s passion, vision, and talent that single-handedly revived the Rocky franchise. As Stallone told Variety in a recent profile, he thought that his imaginary best friend’s story was finished after 2006’s Rocky Balboa, but Coogler convinced him that there was still life left in the character and his world.

According to LA Times reporter Amy Kaufman, though, Stallone rushed back to the microphone to thank Coogler. “You did it all, I just hung on for dear life,” he said. Unfortunately for viewers at home, the show had already cut to commercial.

Stallone also addressed the oversight on Twitter the next day. Responding to a tweet from the legendary Samuel L. Jackson, Stallone posted the following:

While other winners and presenters goofed off backstage and Jennifer Lawrence teased a reporter for looking at his phone, Stallone treated to the press to some surprisingly serious and ponderous answers, admitting that he wasn’t exaggerating when he called Rocky his imaginary friend. He even talks to the boxer on occasion.

“There’s a time when you are alone [writing] and it’s three or four o’clock in the morning, and I’ll actually put on the computer and turn on [the program] where you film yourself, and have ongoing conversations with [Rocky]. And in that, sometimes you actually come up with some interesting, viable ideas. Because we all have an internal dialogue, and quite often no one really captures that into any kind of script or writes that down. . . . But yes, I have long conversations with Rocky Balboa and every now and then, there is a little piece of it that makes it into the film.”

He went on to give a specific example of how that worked with Creed. “I say the toughest opponent you’re going to have to face is that guy in the mirror every morning.” This line, Stallone said, encompasses so much of what makes Rocky such an enduring character. “Life is so volatile and just when you think you have it together, it slips away. And that’s what makes Rocky still viable today. Because he is so imperfect, and he’s trying to change something that is perfect, and it’s just not possible. He never stops trying.”

When a reporter asked if Balboa would live forever, Stallone got downright philosophical. “He certainly will not live forever because he represents what life is all about. We don’t stay here permanently. It’s a cycle. And the greatest man in the world will die. . . not just Rocky Balboa but really important men—scientists, doctors, heroes, Galileo, the greatest warriors. There’s one line in the movie where I say life is undefeated. Time is undefeated . . . we left [Creed] at a point where Rocky is still ailing, and we leave it up to the audience’s imagination. But we do try to project that life is a one-strike baseball game. You better fight to keep it. You don’t get a chance to try it again . . . dying is easy. Living is hard.”

We won’t have to say goodbye to the beloved fictional boxer just yet, though. At the ceremony, MGM CEO Gary Barber told a reporter for Variety that the studio is eyeing a November 2017 release date for the Creed sequel. “That’s my goal,” Barber promised the Hollywood trade paper.

Specific details on the next Creed film are still scarce. Michael B. Jordan is ready to return to the ring, but Coogler likely won’t be back as a writer or director, because he’ll be busy taking charge of Marvel’s Black Panther movie. Stallone seems convinced that the filmmaker will still be involved in some capacity, though. In his recent Variety story, the actor said that Coogler could come on as an executive producer. He also shared a couple of ideas that he has for potential plots for the sequel.

We’ll share more details about the next Creed as they become available. In the meantime, maybe we’ll take a tour around town and check out some of the local landmarks that were featured in the first one.

Were you excited about Sylvester Stallone’s win? Are you looking forward to the next Creed? Let us know in the comments!