It was a bloody affair last night. Even though Jose Aldo didn’t get to fight because of injury, the night was full of pleasant surprises and great action.

The main two fights were excellent. Robbie Lawler managed a TKO against Rory MacDonald. This was an incredible contest. 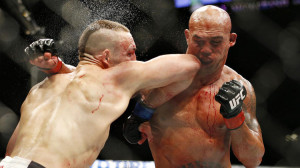 At first MacDonald was dominating with his special brand of striking. He has such long limbs, it’s pretty tough to get in on him. He wabbled Lawler a few times. The fight was brutal. At some point Lawler opened a gash on MacDonald’s nose that kept gushing blood all night. You couldn’t even see his face. 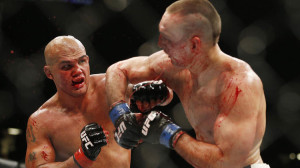 Finally Lawler kept pounding on him and pounding on that nose that MacDonald had to just sit down and lie back. He was done. When Lawler went to finish him on the canvas the referee stopped the fight.

The main fight was also brutal and exciting. I had been looking forward to Jose Aldo facing Conor McGregor. That would have been a fight for the ages. Instead, because of injury, Chad Mendes had to step in for Aldo. 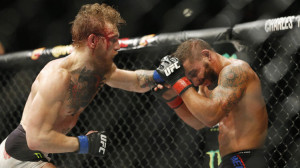 I haven’t seen that much of Mendes before but I have to say I was impressed. He did well against the lanky Irishman with some overhand punches and with take downs. I think he took McGregor down three or four times and dominated on the ground, even cutting McGregor above the right eye with an elbow. 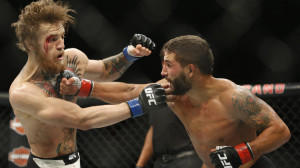 But it seems that he ran out of steam half way through round three. When McGregor managed to get the fight back on its feet it was his time.

His range of kicking and punching and his reach were too much for Mendes to handle. It was another TKO. 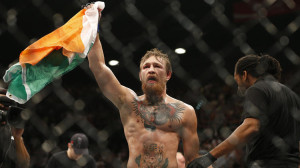 An overall excellent night of fighting. As I see how the UFC has evolved from it’s brutal beginning to the great athletes that compete today, I have to say that I think it truly embodies some of the purest elements of the martial arts that you’ll find. It is really a testament to the training and the skill of these practitioners.

And even though the fights are much better regulated now than in the beginning, they still have some of that sense of brutality that’s so appealing to the crowd.

It’s a real fight after all. Somebody will get bloody!