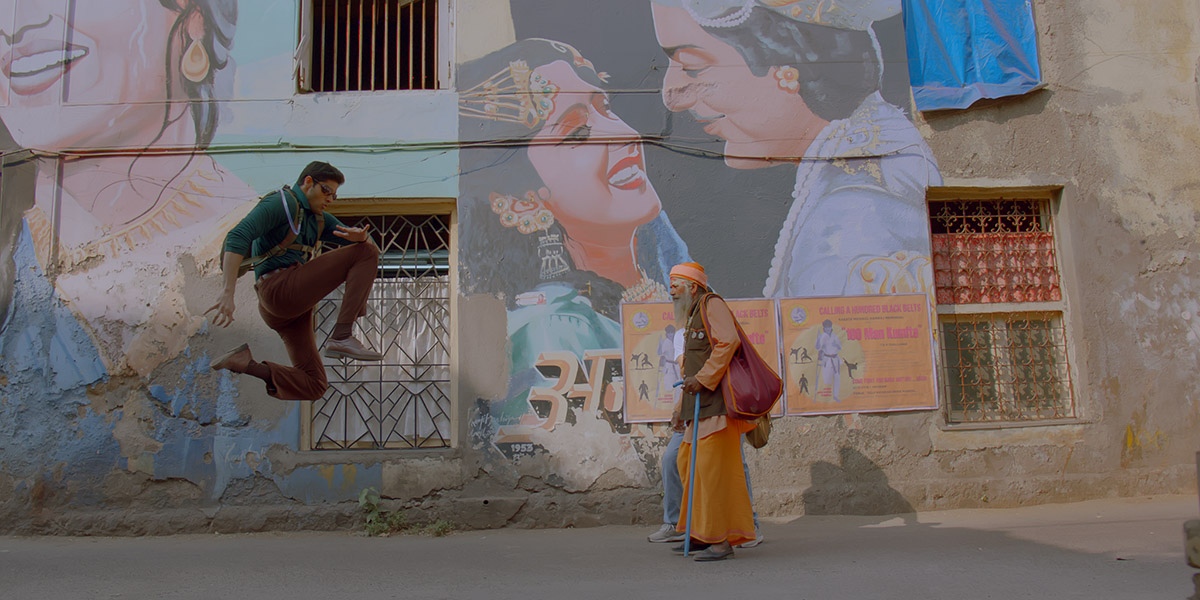 From The Man Who Feels No Pain, Courtesy of TIFF

Every fall, TIFF, aka the Toronto International Film Festival, takes over downtown Toronto to celebrate the best and brightest in cinema. For 11 days, filmmakers, stars, critics, industry luminaries, hopefuls, and fans gather to watch films from all over the world of every budget, length, and genre. From Hollywood blockbusters and Oscar bait to bold new independent visions, TIFF has something for every type of film lover. Including martial arts film fans.

The AWMA blog had the pleasure of attending the 2018 edition of TIFF and checking out some of those amazing martial arts and combat-inspired films. Here are our favorites:

In her second feature film, director Carmel Winters tackles the story of a young Irish Traveller who dreams of becoming a boxer like her hero, Muhammad Ali, in the 1960s. Frances (Hazel Doupe) has loved boxing since she was just a child practicing her combos with her father and listening to Ali’s fights on the radio as her people travelled across the Irish countryside. The harsh realities of her life often make this dream seem impossible, though. Finding strength in the trials of her hero, though, she keeps literally and metaphorically fighting through the loss of her mother, the imprisonment of her father, and the ongoing persecution of her people. Until the day finally comes when she’s able to put on her gloves and prove herself.

Touching without being too saccharine, inspirational without pandering, Float Like A Butterly embodies everything that we love best in a good combat film: strong characters, determination, a heartening battle against adversity… and some great action, too.

Legend of the Demon Cat

While this might not officially be a martial arts film — most of the action comes from the film’s titular feline — legendary filmmaker Chen Kaige’s latest certainly has the sweeping, beautiful storytelling that we love in our favorite martial arts storytelling and is sure to please any wuxia fan.

Based on Japanese fiction writer Baku Yumemakura’s bestselling novel of the same name, Legend of the Demon Cat slowly reveals the beauty and the hidden treachery of a fictionalized version of the Tang dynasty. Mysticism and poetry, past and present, magic and the most brutal of realities weave together to tell the tragic story of Yang Guifei, the previous emperor’s most cherished concubine — a tale which begins to unravel thanks to the disruptive efforts of a talking black cat. Stunningly written, performed, and realized (the set is actually a real village that Chen and his team reconstructed over the course of five years), Legend is a delight for anyone who cares about epic stories about love, loss, honor, and loyalty. And anyone who loves black cats.

This short documentary on Ashley Nichols is just ten minutes long, but director Caroline Monnet packs a lot into this striking profile on the Chippewa MMA fighter. Shot in stunning black and white, Emptying the Tank tackles everything from Nichols’s training techniques to her  mental game to her spiritual focus. It’s an inspirational and thoughtful portrait of a what makes a warrior.

Introducing his latest film before a screening at TIFF, master director, writer, and actor Shinya Tsukamoto spoke honestly about his fear of war. Through a translator, he told the audience that he had been lulled into complacency by the years of peace that Japan has enjoyed, and felt that he — and many others — no longer understood the true horrors and impact of warfare. His previous film, 2014’s Fires on the Plain, tackled his concerns through the lens of World War II. With Killing, he said, he distilled all of the weapons of that war into a single blade.

Taking his newfound fears of and reflections on violence back to the Edo period, Tsukamoto crafts an arresting and haunting — and entirely unglamorous — portrait of battle as seen through the eyes of a ronin who no longer wants to fight. While the Killing might not be particularly thrilling for anyone looking for great fights scenes — Tsukamoto’s presentation of combat is deliberately ugly and unsettling — this deep and soul-searching story of a pacifist samurai will long linger in the minds of anyone who has thought about the implications of martial combat outside of the friendly competition of dojos and tournament settings.

Tsukamoto’s post-screening Q&A, in which he talks about his shifting view of violence, and the changes in the way that he wants to portray it in his films, was equally thought-provoking, and is definitely worth a watch:

The Man Who Feels No Pain

Here’s a fun underdog story about a fun underdog story: Mard Ko Dard Nahi Hota (aka The Man Who Feels No Pain), a low-budget love letter to Bollywood, B-movies, and Karate films, was up against some stiff and high-profile Hollywood competition for the coveted Grolsch People’s Choice Midnight Madness Award at TIFF. But it trounced the competition, which included the new Predator and Halloween films, for a very exciting and well-deserved win.

The Man Who Feels No Pain is, quite literally, about a young man with a congenital insensitivity to pain. While his father tries to protect him from the world, Surya obsessively studies old martial arts movies and demonstrations on VHS cassettes and dreams of becoming a martial artist who fights crime… and 100 opponents in a kumite tournament. Playful but earnestly true to its inspirations and packed with some truly inspired fight scenes, this film is an absolute thrill for anyone who has ever dreamed of being a Karate star — or anyone who has simply enjoyed watching their journeys on screen. It’s also a great lesson on the importance of hydration while participating in martial arts.

Did you see any films at TIFF? Are you excited about this new crop of martial arts films? Let us know in the comments!

And don’t forget to check out our online store for all of your martial arts training needs.

boxingKaratekarate moviesmartial arts filmsmartial arts in pop culturemartial arts on filmmma
« Previous PostWhat It Takes to Find the Right Judo Uniform for Your First Challenge Next Post »Taekwondo Uniforms: Know Where It All Started