Systema is a Russian martial arts that dates back to the 10th century. It’s really an amalgamation of styles. You can see by their movement that they are using techniques found in Aikido, Tai Chi, Xing Yi and other systems.

Weather Systema developed these techniques on their own or simply adapted from other systems it’s really unimportant. They’ve become masters of the mechanics of human combat.

Note the fluidity and power of their moves:

I became interested in the style many years ago when I was doing research on internal martial arts. I came across a video of Mikhail Ryabko performing some of his, now famous, one punch knock outs. The reason I found it so fascinating was the ease he used to strike. How relaxed he was. It reminded me of the body motions of masters of other internal arts. 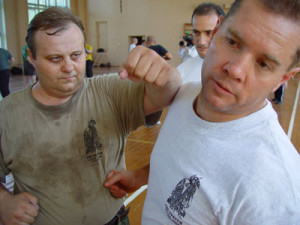 Here he is demonstrating the technique they use to punch. He first uses a hammer to demonstrate how the striking is done in a relaxed manner and how you’re sending the energy through the body of the opponent. It’s the whole concept of heavy hands.

Here’s another video of Ryabko performing some strike defenses and throws. I don’t know about the throws he does almost without touching the opponent – there’s an element of partner cooperation in that. But the way in which he anticipates the attacker and is able to stop the progress before the opponent can develop the technique is masterful.

Ryabko has a number of students that teach all over the world. Most notable is Vladimir Vasiliev who teaches out of Toronto. 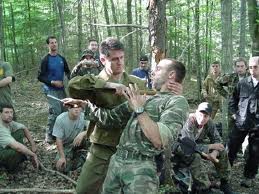 Here he is explaining how the body needs to remain relaxed and pliable to forces. That way it can react according to the opponent’s intention.

It’s really beautiful to watch these guys work. It does illustrate how mastery can make the most complex moves look simple.