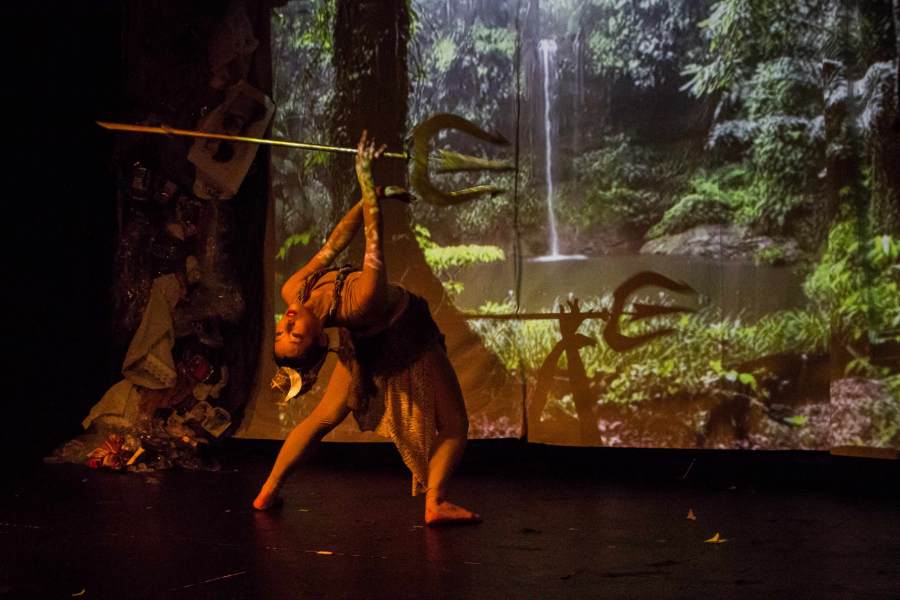 Martial arts’ influence can be seen in a wide range of fine and performing arts. We here at the AWMA blog love keeping an eye on how our martial arts culture inspires pop culture on screen, on the page, on canvas, and on record. But few, if any, other art forms seems to have the same connection to the martial kind as dance has.

The similarities might not be obvious on the surface, considering one was designed for combat purposes while the other’s primary goal is aesthetic appeal. But there are also similarities in the two disciplines, as they both require dedication, focus, and precise physical skills and techniques. The connections between the two arts are also fascinating. Dance, for instance, has had a deep influence on the development of capoeira throughout its history. Dance training has also proven to be an important foundation for some of our most beloved martial arts movie stars like Michelle Yeoh and Cheng Pei-pei.

Competitive martial artists have also turned to dance as a form of cross-training. World Series of Fighting star David Branch turned to ballet classes to improve his game — and declared it one of the biggest challenges he’d faced. “The first day I went, it was harder than any workout I’ve ever done,” Branch told WSOF’s official site. “I feel it in my balance. I feel it in my overall physical strength. I feel it everywhere. Just in my posture and I feel like when I get into scrambles in a fight or anything fighting wise that involves entanglement and striking, I feel so strong. It’s natural strength, you know.”

Sugar Ray Robinson once took a break from boxing to become a tap dancer. “In 1952, Robinson left the ring and started a career in showbiz,” Mental Floss reported in 2014. “He toured with the Count Basie Orchestra, performed on the Ed Sullivan Show, and even played at Harlem’s Apollo Theater. In some bits, he would tap dance and skip rope at the same time! Although he considered his dance training tougher than his boxing regimen, Robinson’s act was not very polished. Time magazine called him a ‘second-rate song and dance man,’ and most critics considered him average at best. By 1955, Robinson ditched his dancing shoes and gave boxing another go.”

Here he is with none other Gene Kelly on an 1958 episode of Omnibus:

This is why we were so interested to hear about a new dance production taking place in Long Island City at the end of the month that promises to continue this intriguing tradition. “MA,” which will run at The Secret Theatre from June 28- July 1, combines dance, martial arts, and live music, is a brand new interpretation of the Mayan legend of Zopilote.

Here’s a preview of MA:

According to MA’s synopsis:

“Zopilote lives in balance between life and death, consuming the dead and giving birth to new life. When Zopilote devours the child of Subaru, a female Ninja, she creates a mortal enemy: a broken-hearted mother who will do anything to exact her revenge. Subaru makes it her mission to find and kill Zopilote, but at the same moment, in the Negative Space, she herself is being hunted by Scorpion, a Ninja assassin set on finding and killing her in retribution for her clan’s murder of his own parents.”

MA is the latest production from Ninja Ballet, a dance and martial arts company run by award-winning ballerina, choreographer, and Artistic Director Shoko Tamai. The biography on the company’s website is utterly compelling:

Ninja Ballet, a New York-based performing arts company. A fusion of Eastern and Western dance methodology, performance, and practice, Ninja Ballet seeks to bridge the gap between Classical Ballet and Martial Arts, to create a new genre. ‘Swan Lake’ meets ‘The Matrix’. Our performers blur the line between what’s real and what’s possible, as technological advancements create new and exciting interactive performance capabilities in theater spaces. Fire, weapons, acrobatics; Any of these things might be a tool for the Ninja Ballet Performer. In our School, you learn the expect the unexpected.

As is their mission statement:

Ninja Ballet’s mission is to create a performing arts company that will show the world how dance can self sustain while enriching our lives. To create and experiment with new movements in Classical Ballet , Traditional Martial Arts, and Circus. To join East with West, fusing energy without losing identity. To establish The School of Ninja Ballet, and pass on knowledge of Ninja Ballet Arts.

Expression. #NinjaBallet Thank you to our production manager Eddie for getting us performances every weekend. This photos is taken by @thomaswilsonpics danced with @senseizelly #martialarts #dance #fusion Our up coming performance is coming up within month. #thesecrettheatre

Ninja Ballet’s current offerings include contemporary flow work that has been inspired by ninjustu, and fire and LED staff-based performances that incorporate ballet with traditional Chinese martial arts techniques. For more information, visit their official site.

And for a taste of the creative ways in which this dance company is embracing martial arts, check out the video below:

Are you a fan of dance? Or maybe even a dancer? Have you ever tried to combine the two arts? What do you think of Ninja Ballet? Let us know in the comments!

And don’t forget to check out our online store. We’ve got the training gear — and the ninja gear — you’ll need to take part of the combat side of any martial arts-inspired dance work you want to try.