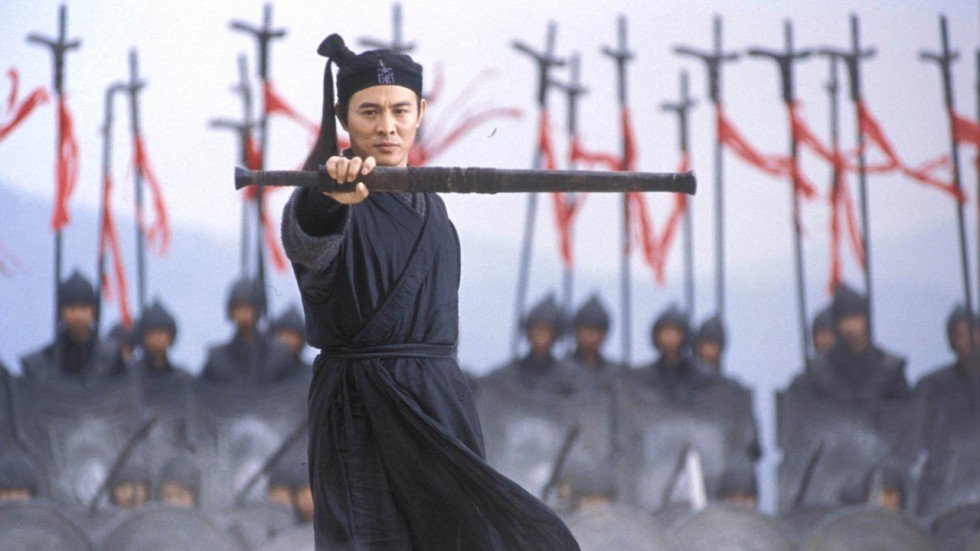 If you’re a martial arts and film fan of a certain age, you might recall some reports floating around in the early 2000s about Jet Li being considered to play a guardian angel-like character for the Oracle in the Matrix sequels. The Wachowski Sisters eventually cast Taiwanese actor and martial artist Collin Chou as this character, known as Seraph, and he did a fantastic job with the part.

Here he is in action:

But some fans were left wondering what had happened with their original choice.

Li has casually addressed his decision to turn down the role of Seraph since then. In 2002, he gave this polite answer to the BBC:

“I thought The Matrix was already very successful. The Wachowski [sisters] are friends of mine. They wrote a small, unique part for me for Part 3 [The Matrix Revolutions]. The film is still going to be successful, so why did they need Jet Li? We don’t want to see one action movie with everybody in it. The audience – who do they choose?”

“The Wachowski [Sisters] is a friend of mine. They are very talented director. Also have Wu-Ping, so, without Jet Li, must be great. So, that way I don’t want to spend two years to make that film. If I made Matrix, I cannot make Hero. So… I think sometimes you get something and sometimes you lose something. And I tried my best, I got Hero. I do it. I appreciate the director give me a chance to play this movie.”

Almost two decades later, though, we have a clearer picture of the deep thought process that went into this choice. In a recent interview translated by Abacus, Jet Li discussed a major concern that led to his eventual refusal.“It was a commercial struggle for me. I realized the Americans wanted me to film for three months but be with the crew for nine. And for six months, they wanted to record and copy all my moves into a digital library,” he said. “By the end of the recording, the right to these moves would go to them.”

This process left Li with some serious concerns for its long term implications. “I was thinking: I’ve been training my entire life. And we martial artists could only grow older. Yet they could own [my moves] as an intellectual property forever. So I said I couldn’t do that.”

There are two reasons why these relatively simple statements have gained so much attention. First of all, Jet Li’s ability to see this issue so clearly back in the early days of the millennium is a true testament to his genius as a martial arts star. Years before holograms and CGI performances were more than a passing fantasy for many people in arts and entertainment, he was able to see how technology was evolving, think about its long-term applications, and make a decision that protected him, his art, and the very tradition of martial arts on film.

But it also speaks to a greater issue that many of us are facing in so many facets of society today. From late musicians and actors being “resurrected” in hologram form on stage and computer-generated performances on film to the increasing prevalence of robots in the work force, we’re faced with a whole new set of questions about what human work and performance will mean in the future. When everything from our labor to our creativity can be produced by machines and computers — when even this very blog could be written by a robot in the not do distance future — how do we preserve the importance of our efforts? How do we take pride in them?

It’s entirely possible that the next generation of martial arts stars won’t have the same choices that Li was able to make and that they won’t be able to protect their practice and the martial arts that they represent as clearly as he was at the time. But that doesn’t mean that all hope is lost. In fact, as we learn to live with automation and computerizations, martial arts and martial arts culture might be uniquely qualified to help us figure out how to successfully combine what we have done in the past with what can do in the future.

Since their very inception, martial arts have grown with the times. They’ve gone from their most literal interpretation as battle arts used in martial situations to the combat sports, self defence systems, and performance arts that we know and love today. They’ve been adapted for stage and screen. They’ve been taught to every age group and every ability for purposes ranging from a hobby to a lifelong calling. No matter how much things change, though, there are some important fundamentals that remain the same: the respect that we have for tradition, and for hard work.

No matter what comes next, that spirit that has guided so many before us — including Jet Li himself — will continue to live on in us and in the generations that follow us.

Are you a Jet Li fan? Are you a Matrix fan? What do you think of his decision? Let us know in the comments!

And don’t forget to check out our online store for all of your real life martial arts training needs.