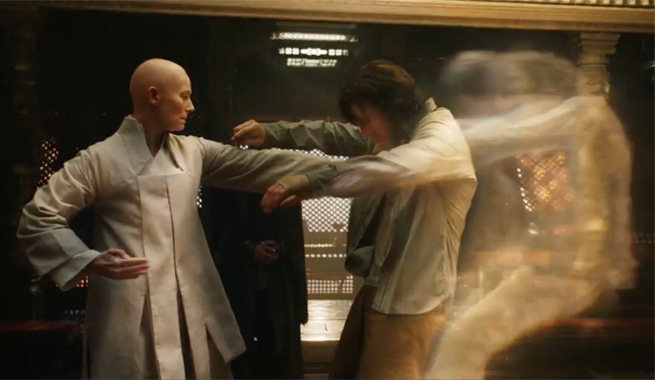 While Doctor Strange, the latest offering from Marvel Studios might offer many of the hallmarks we’ve come to expect from the Marvelverse – the mix of humor and action, the supernatural elements, and even the story of a successful but arrogant man who finds a new calling and sense of purpose after a near-death experience are all things that we’ve seen and loved before in movies like Iron Man, The Avengers, and Captain America – but it’s also different from its cinematic siblings in some important and interesting ways.

While many Marvel movies have relied on more scientific explanations for their fantastical elements – even the Thor movies focus more on the technology of its titular character’s world than the fact that he’s an actual Norse god – Doctor Strange is more interested in embracing the metaphysical and spiritual. Even its fight scenes have a more mystical quality, eschewing the more practical, street fight and MMA-influenced Avengers-style smashing and banging for a more classic martial arts flair.

“There’s definitely a martial arts influence on the movie,” director Scott Derrickson told the media during a tour of the set. “That’s the action that I like, for starters.  Also martial arts is the kind of action that does tie in well to the supernatural. There’s a whole subgenre within martial arts cinema, the supernatural martial arts movie, particularly within Asian cinema. I felt like when it came to fighting in the movie it just made sense to go in that direction and stay away from, you know, gunfire and things like that.”

In order to tell the story of Stephen Strange (Benedict Cumberbatch), the successful doctor who finds himself under the tutelage of a martial arts master called The Ancient One after losing the ability to perform surgery in an accident, many members of the cast had to go on some martial arts journeys of their own.

Some found the learning curve a little easier than others. Mads Mikkelsen, the rising Danish star who plays the villain Kaecilius in the film, believes that his dance and acrobatic background helped prepare him for the physical demands of his latest role (although we’re guessing the hints of jiu-jitsu that he picked up while playing Hannibal in the NBC TV series of the same name didn’t hurt, either). “I’ve been practicing all my life in the sense that I’m an ex-gymnast and I’ve always wanted to do that. But it took a Marvel film to do it for me,” he told Yahoo last summer. “I’m really good at it,” he said of his new “fantastic” martial arts skills.

Mikkelsen went on to reveal that he had one particular martial arts star in mind while he was working on the production. “We have a lot of physicality going on, and it’s martial arts, and one of my biggest heroes of all time is Bruce Lee. Who would’ve thought at the age of 50 I would get to be a miniature version of him?”

Benedict Cumberbatch might play literature’s most famous baritsu expert in BBC’s Sherlock, but he still considered himself enough of a novice in all things martial arts to identify with his character. And that was part of the reason that he signed on for the picture. “One of the things that attracted me to the role is the fact that it’s a really wide origin story,” the actor told Nerdist last September. “It’s fantastic. It gives me an excuse as an actor to be learning with my character, which is something you can do authentically. I’m not a martial arts expert, I’m certainly no sorcerer. So all these things, the movement of the body, the physicality, the changes he goes through mentally and physically; obviously we’re not shooting in sequence, but it’s a great part. It’s a great part for the character that made me want to play him in the first place.”

Perhaps no one was more excited about their chance to become a martial arts student than the person who played the film’s master, though. Tilda Swinton, who learned from a collection of martial artists from various disciplines – and even some dancers – to help develop and then recreate The Ancient One’s unique style and discipline, raved about the experience to the press.

“It was like being at a most delicious school. We were learning al these things that we would never otherwise have learned. You want to do something that draws on certain disciplines or certain traditions but at the same time you want to do something that’s never been done before,” Swinton said, according to DNA. “You want to make it original and the fight directors have done a phenomenal job of creating a particular style of fighting that only people who have studied under The Ancient One in Kamar-Taj will know.”

Although filming is long over and Doctor Strange has been in theaters for a couple of weeks now, it looks like the movie isn’t quite done with the lessons quite yet. Earlier this month, actress and martial artist Zara Phythian, who plays a co-conspirator of Mikkelsen’s in the film, held a special screening in the United Kingdom to help promote WMKF World Martial Arts Championships that took place in Mansfield, England from November 11-13. You can catch some red carpet interviews with some of the screening’s martial artist guests – including some of Doctor Strange’s stunt people– here:

And if you want to learn more about Mads Mikkelsen’s on screen inspiration, be sure to check out our extensive collection of Bruce Lee materials in our brand new online store!