Eddie Alvarez: From Rocky’s Philadelphia To The Main Event Of UFC 205 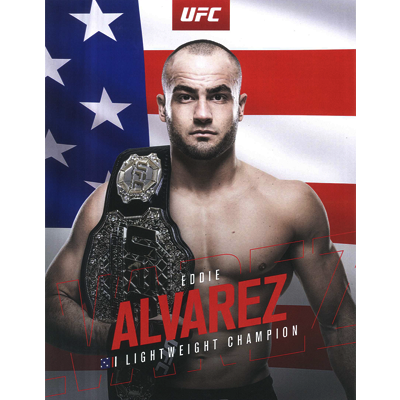 MMA sensation and breakthrough star Conor McGregor has made it clear since he first stepped into the UFC that he wants to be a champion in multiple divisions. He officially took the first step toward that quest on July 11, 2015 when he defeated Chad Mendes to become the interim UFC Featherweight champion. He solidified his position in that division on December 12 of that year when he delivered a devastating knockout to Jose Aldo to become the Undisputed Featherweight Champion of the promotion at UFC 194. Now, a few injuries, missteps, and a two-fight feud with Nate Diaz later, McGregor is finally set to challenge for the second belt in his collection as part of the blockbuster UFC 205 card going down at the legendary Madison Square Garden in New York City this Saturday night: the Lightweight Championship.

To get that belt, though, he’s going to have to defeat AWMA’s hometown hero, Eddie Alvarez. And the current Lightweight champ is far from an easy fight for The Notorious one.

The champ goes on to describe his childhood stomping grounds as the elephant graveyard from The Lion King. “This is where you don’t go. This is where the sun don’t shine. This is a place you don’t explore or try to find out about.”

Alvarez went on to say, though, that his childhood made him the fighter he is today “100%. I think, as a kid, if you grow up with not a lot of resources, it forces you to become resourceful. I think my biggest attribute, inside and outside the cage, is my ability to be resourceful. To find light where there is none, to be in a dark place and know that I’m still going to come out on top and I think that i’ve been doing it from such a young age, that it’s natural to me. I think it’s my biggest attribute inside the cage.”

It also, in more concrete terms, gave him his first experience with combat sports when he learned some boxing moves from his father and started sparring with his neighbors. “I used to come out of my door – I used to have maybe, like, four boxing gloves – and I used to walk down the street here and I used to knock for my friends and I used to ask them if they wanted to box. My dad used to teach me how to throw some punches and everything like that,” Alvarez recalled. “We used to box right here in the middle of the street.”

When Alvarez was between 8 and 10, his father agreed to let him take boxing lessons at the local Front Street gym (future boxing star and WBC welterweight title holder Danny Garcia started training at another gym around the corner around the same time). While attending Northeast Catholic High School, he added amateur wrestling to his growing arsenal of combat skills. “He was a two-time National Prep All-American, and placed 6th in both 200 and 2001 at the National Prep School Wrestling Championships in the 145 lb weight class,” the biography on his official site reports.

At the tail end of his decorated wrestling career, Alvarez attended his first UFC event in Atlantic City. The teenager – Alvarez told Helwani that he would have been 17 or 18 at the time – had been casually following mixed martial arts before then, but that event would change his destiny forever. “I told my brother ‘I’m going to do this.’”

True to his word, Alvarez began pursuing MMA as soon as he graduated from high school. Just eight months into his training, he had his first professional fight against Anthony Ladonna at Ring of Combat 5 on December 14, 2003 in Elizabeth, New Jersey. He scored a KO victory at the 3:57 mark of the first round.

Although he lost his Bodog belt to Nick Thompson in April of the following year, Alvarez didn’t stay down for long. He won his final fight for the promotion and his debut for EliteXC, earning a TKO victory over Ross Ebanez in their 160 lb division.

Alvarez then went on to compete in the DREAM promotion’s 154 pound grand prix where scored wins against Andre Amade (March 15, 2008), Joachim Hansen (May 11, 2008) and Tatsuya Kawajiri (July 21, 2008) before being forced to withdraw from the tournament due to an eye injury.

Following that grand prix, Alvarez spent the next six years fighting for K-1, DREAM, and Bellator (where he became a two-time champ) and racking up an impressive 25-3 record before signing with the UFC. His debut for the promotion might have been an inauspicious unanimous decision loss to the workhorse Donald Cerrone at UFC 178 on September 27, 2014, but he’s been unstoppable ever since.

At UFC 188, he defied the odds against Gilbert Melendez, who later tested positive for steroids, to earn a split-decision win. He racked up another split decision victory against the former UFC Lightweight Champion Anthony Pettis at UFC Fight Night 81 to launch himself to the top of the division’s contenders.

When he finally got his shot at the belt in the main event of Fight Night 90 on July 7, 2016, Alvarez didn’t leave things up to the judges. At the 3:49 mark of the 1st round, he scored a knockout victory over Raphael dos Anjos to become the new Undisputed UFC Lightweight Champion.

This coming Saturday, Alvarez will defend his title for the first time against Conor McGregor. While he isn’t looking past his new opponent – Alvarez insists that he does respect The Notorious – he’s not particularly concerned about the fight, which he thinks is a bad matchup for the Irish superstar.

“To me, he’s just a left hand,” Alvarez recently told the MMA Roasted podcast. “He’s just a guy with a left hand. That’s how I see him. He does something that we call a ‘rock back’ well. Mayweather does it. A lot of Philly fighters do it. [McGregor] lives and breathes off of it. A lot of MMA guys don’t know about these boxing things that they do. This is move that’s very easily taken away and we’re  going to dominate every step of the way.”

Two and a half decades after he started boxing on the streets of Philadelphia, it seems that Eddie Alvarez is ready to put those skills to the test in the heart of New York City. We’ll see how he fares when he takes on McGregor in the main event of UFC 205 on Saturday, November 12.

You can cheer on Eddie Alvarez with our very own Underground King t-shirt available at our brand new online store. 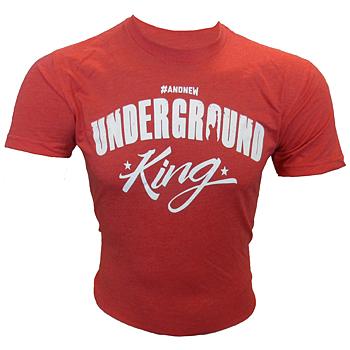 Are you rooting for Eddie? Will you be watching UFC 205? Let us know in the comments!