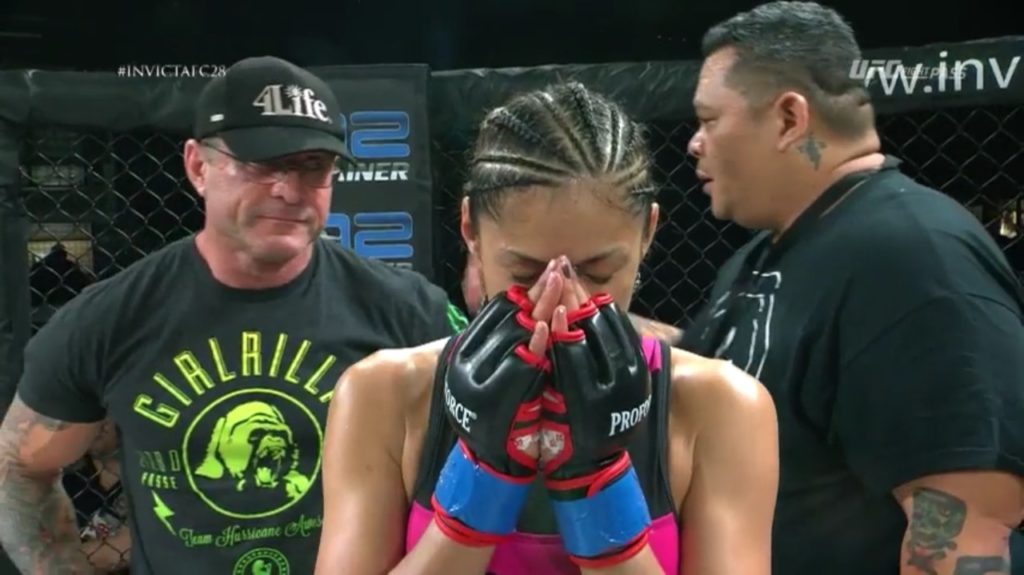 And there was another exciting debut on the card: Us!

Tonight we are giving back to our fans! Text INVICTA to 555888 and get free swag, discounts, and enter to win autographed fight gloves! If you’re outside of the USA click the link in bio!

Schwartz controlled the clinch throughout the first round, scoring with short punches and knees. Hansen broke free for a moment, but was quickly slammed to the canvas. #InvictaFC28 pic.twitter.com/FVtlTojwka

“I am so thrilled, excited, and honored for AWMA, manufacturer and distributor of PROFORCE ®, to be the official MMA glove sponsor of the INVICTA FIGHTING CHAMPIONSHIPS,” Georgette Ciukurescu, the President and CEO of AWMA tells the AWMA Blog. “As a female president, CEO, and owner, it is refreshing to collaborate with another female president and owner, Shannon Knapp. Shannon spearheaded the movement to further extend the opportunities for women in the sport of MMA, which is an exceptional accomplishment.”

Ciukurescu is also impressed with the organization as a whole and the opportunities that it creates for women’s MMA stars. “I think INVICTA FC is an incredible platform for female fighters who want to compete in the professional Mixed Martial Arts world.  Their association with Ultimate Fighting Championship ®, UFC, validates them as being a top-level organization for women who are up and coming to world-class athletes.”

Our president was thrilled with Invicta 28 and is already anticipating the next event, which will see Sarah Kaufman face Katharina Lehner for the currently vacant Bantamweight Championship and takes place on May 4 at the Scottish Rite Temple in Kansas City, Missouri. “I would like to congratulate Virna Jandiroba on becoming the new Strawweight Champion.  Her performance together with the rest of the fighters was extraordinary.  The production of the event complimented the talent and skill of the female athletes and their teams. Looking forward to INVICTA 29!”

Did you watch Invicta FC 28 last weekend? Did you notice our gloves? Let us know in the comments!

And check out our online store for your own pair of MMA gloves and any other martial arts supplies you might need!