Spent some time watching the Dare Devil series on Netflix this last weekend. Several of my friends had told me about it and I kept seeing comments on Facebook about how good the show was and how awesome the fight scenes were. 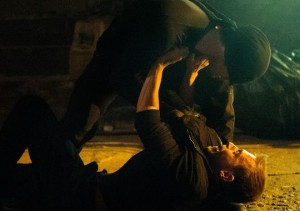 From the beginning I was interested. I like dark stuff like that and I’m certainly attracted to a hero that uses martial arts as his main way to fight crime.

On top of all of that, I’m fascinated by the ability of a blind person to actually sense where somebody else is.

When I was training to go to the National Tournament, years ago, I remember working on “Chi Sao” or sticky hands, and after working with a partner for months, you can close your eyes for a few minutes at a time and you can sense where the other’s hands are and when blows are coming.

This is not a supernatural skill. This is just the way our brain and senses work. 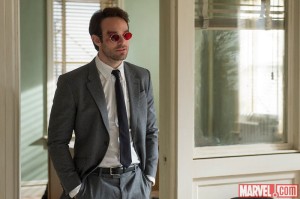 So having a hero who has developed this skill to an extreme sounded very appealing to me.

I had also seen the movie with Ben Afflec and found it to be awful. Somehow I was hoping this show would redeem the franchise. 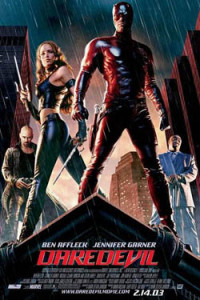 It started out well. But after seeing the first two episodes I wasn’t hooked.

I guess I’ve become very demanding when it comes to television programs. There’s so many choices out there that I can’t really waste my time with something that doesn’t hook me from the beginning. 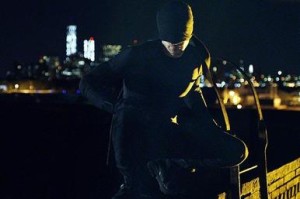 I found the scenes to be a little too long. Characters talking for extended periods of time, trying to explain stuff I didn’t really care about. Plus the scenes were so winded sometimes, I lost track of what it was about in the first place.

The acting is pretty good. And the writing had its moments.

When the time came for Dare Devil to fight I thought the choreography was clean and exciting and that the stunts were well done. 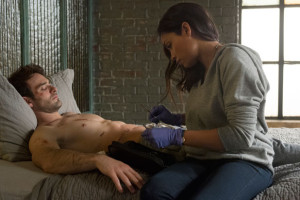 The filmmakers were also trying to give it some veracity by recording some of the scenes in long uninterrupted shots. I thought that the impulse was great. But then they didn’t match the actions of the character with the style they were trying to portray.

The first movie that came to mind that did this was the Korean movie “Old Boy” which I have mentioned on other posts on this blog.

In “Old Boy” you also have long scenes were the character is fighting multiple opponents. But in that case, you can see the character getting more and more tired and the technique getting sloppy.

In the case of Dare Devil, the scene takes place during an episode in which our hero has been on a couch for 80% of it. He’s been hurt and his lung has collapsed. He can hardly walk. 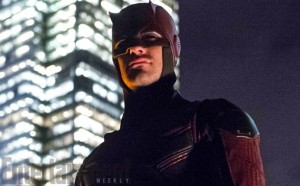 Then he tracks down these gangsters and has a fight with maybe ten people.

I didn’t mind that he’s tough and can get up and go fight. However, during the fight, he’s using spinning techniques and jump kicks and things that only a fresh man would use – certainly not somebody who’s in pain.

So I was a little disappointed by the execution of something that I thought could have been a pretty cool scene.

Still, my girlfriend and I gave it a second chance. We sat down the other night and watched a few more episodes.

I have to be honest…it lost me again. I don’t know if it’s the dialogue or the lack of a meaningful plot line, but I’m just not being hooked. I can turn away from it too quickly.

Still, I’m willing to give it another chance. At the end of the last episode, a man commits suicide by impaling himself through the eye with a spike. I thought that was pretty cool, as far a suicides go.

They also introduced the character of the arch-villain, played by Vincent D’onofrio. I love him. I think he’s a hell of an actor. So I’m willing to see where this goes. 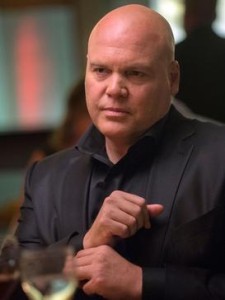 A few weeks ago I learned that Netflix picked up the show for a second season but that the showrunners had been replaced. For those of you that don’t know what a showrunner is, this is the person that makes all decisions on the show, the person in charge of the creative choices.

So I’m curious about what the new guys will do with it.

If you haven’t seen Dare Devil, check it out and let us know what you think. You can leave your comments on our Facebook page.