Conor McGregor vs Khabib Nurmagomedov Announced For UFC 229 In October 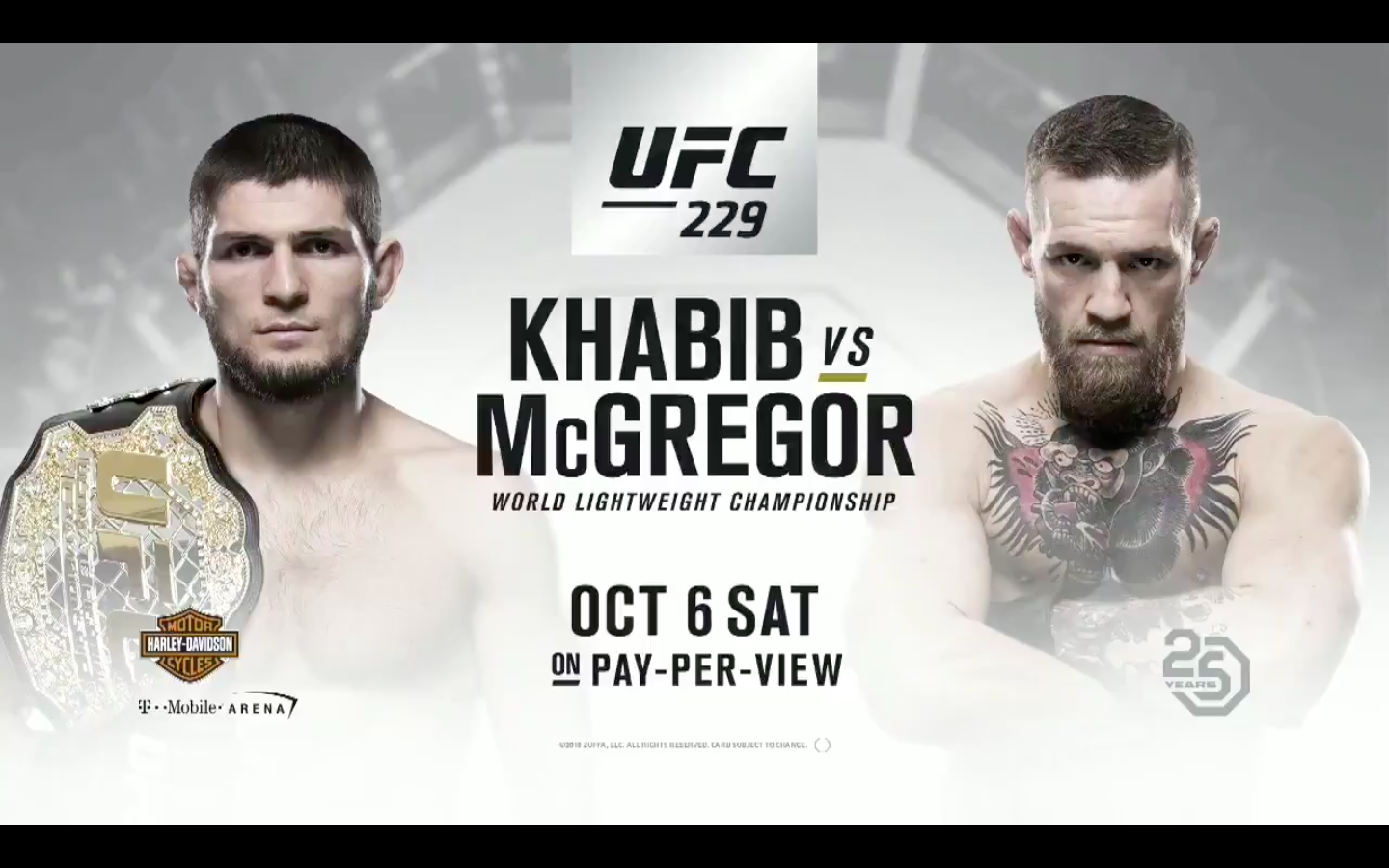 Conor McGregor is in the news again. And, for the first time in far too long, it’s for something actually related to his career as an mixed martial artist.  The 30-year-old fighter, who certainly has been living up to his “The Notorious” nickname since he last set foot in a UFC octagon, will be making his return to the promotion this fall. The UFC announced last Friday that McGregor will be facing Khabib Nurmagomedov in the main event of UFC 229, which will take place in Las Vegas on October 6. Just a little under two years to the day that McGregor last fought in the UFC at UFC 205.

THE FIGHT IS ON!@TeamKhabib vs @TheNotoriousMMA Oct. 6 in Las Vegas at #UFC229! pic.twitter.com/GHNzmj4eWY

While McGregor hasn’t competed in mixed martial arts since he knocked out Eddie Alvarez to claim the UFC Lightweight Championship at that event, he has at least been keeping busy in the meantime. Last summer — August 27, to be precise — he faced off against Floyd Mayweather in boxing match at the T-Mobile Arena in Las Vegas. While he lost to the undefeated boxing legend via TKO in the 10th round, he did gain a lot of attention and even some respect for his participation in this dream match that had been rumoured, teased, and anticipated for years before the pair finally agreed to make it happen. He also, far less admirably, became involved in a melee that culminated with him attacking a bus full of fighters at a press event for UFC 223 in New York last April. McGregor has since pleaded guilty to disorderly conduct as a result of the incident, and was sentenced to five days of community service. He was also stripped of the Lightweight title due to inactivity during this period.

Nurmagomedov, meanwhile, has only become more dominant in McGregor’s absence. The charismatic mixed martial artist and former sambo champ from Russia is currently undefeated in his professional fighting career with a 26-0 record. 10 of those wins are in the UFC. The last one, a unanimous decision against Al Iaquinta at UFC 223, earned him the recently vacated Lightweight belt.

The match between the returning star and the rising star won’t just be about the belt, though. There’s also some bad blood between the two. Khabib, you see, was the target of McGregor’s bus attack. Nurmagomedov had recently been involved in an incident with Artem Lobov, and The Notorious arrived unannounced in New York to defend his friend. After that event, Nurmagomedov said that he would be interested in taking their beef to the octagon. And now here we are.

Although this bout might have a bit too much spectacle and bad blood and not enough old school martial arts-style honor and respect for some fans, there is, at least, a more clear-cut hero looming on the horizon. In a recent interview with Submission Radio, UFC legend Georges St-Pierre said that he would be interested in facing the winner of that fight. For what it’s worth, he’s pretty sure that winner will be Nurmagomedov.

“If I had to put my house on it, I would have to say Khabib [will beat McGregor],” GSP said on the show. “Khabib [has] never lost, Conor has lost before and lost on the ground. That’s where Khabib is the most competent. However, Khabib [is] sometimes a slow starter. He gets punched a lot. He didn’t look good at the start of the fight [with Michael Johnson]. ‘He [finds] it hard sometimes to close the distance. But once he’s got you in the clinch, he’s very good. I believe the odds are in Khabib’s favour, maybe 60-40.”

(Fellow UFC veteran and champ Daniel Cormier was a bit more effusive in his predictions last April, by the way, declaring that McGregor would get “smashed” by Nurmagomedov. “When I watch Conor fight Chad Mendes, Chad Mendes is a great wrestler but he’s small. He beat him up for two rounds. He beat Conor for two rounds until Conor got up. [Mendes] had done that for two straight rounds on 10 days’ notice. [McGregor] ain’t getting up like Al Iaquinta got up. You see what happens when you get stuck under Khabib. You become [previous unsuccessful Nurmagomedov opponents] Edson Barboza and Michael Johnson,” Cormier said at a UFC press event. “[Nurmagomedov will] be the only guy that never loses. He’s not going to lose, man. They won’t know how to deal with him. He’s going to be the only guy that goes through this whole thing without losing. Because I’m not sure he’s going to be here that long. But while he’s here, nobody’s going to beat him.”)

UFC head Dana White has since shot down the possibility of GSP facing the winner for the Lightweight belt in his return match. “That’s probably not going to happen,” White told MMAWeekly. “He gave up the 170-pound belt. He gave up 185-pound belt, you know what I mean? It’s like no, pick a division.”

Of course, White has been known to to misdirect the press and change his mind before, so we won’t lose all hope just yet. First, though, we’ll have to see who will come out on top this coming October in Vegas.

Are you excited about Conor McGregor vs Khabib Nurmagomedov? Who do you think will win? Let us know in the comments!

And don’t forget to check out our online store for all of your MMA and boxing needs.