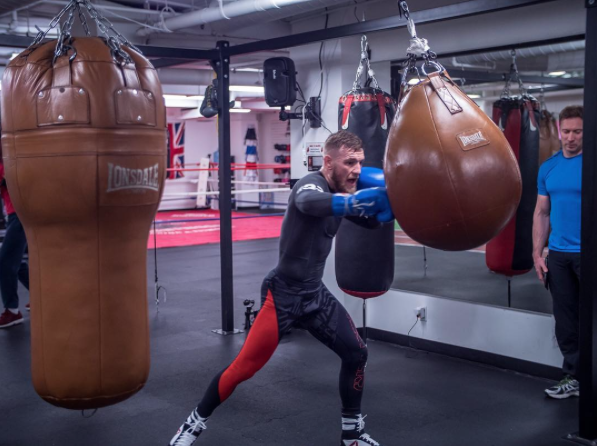 Are Floyd Mayweather and Conor McGregor getting ready to rumble? After almost two years of speculation, fantasy, and rumor – all launched by an idle comment on the Conan O’Brien Show in the summer of 2015 – the dream boxing match between the pugilism legend and the rising MMA sensation took one small but pivotal step toward reality this past weekend when Mayweather announced that he was coming out of retirement. And he only has one opponent on his radar: Conor McGregor.

He’s very serious about wanting to face “The Notorious” this summer. “I don’t want to hear no more excuses about the money, about the UFC,” Mayweather told FightHype. “Sign the paper with the UFC so you can fight me in June. Simple and plain. Let’s fight in June. You’re the B side, I’m the A side. We’re not here to cry about money. I’m tired of all this crying about money and talking about you want to fight. You blowing smoke up everybody’s a**. If you want to fight, sign the paperwork. Let’s do it. Today, I’m officially out of retirement for Conor McGregor. We don’t need to waste no time. We need to make this s**t happen quickly. Let’s get it on in June.”

While we don’t want to get our hopes up just yet – nothing’s set in stone – we are at least starting to entertain the idea of the most anticipated combat fighting crossover in years actually happening. To help us get in the mood for a battle between two giants of their respective sports in the boxing ring, let’s look back at some other famous and infamous martial arts style clashes in fighting history.

It took 19 years but they’ll talk about it forever. #tbe #tmt www.themoneyteam.com

After leaving the WWE on less than friendly terms, Phil Brooks aka CM Punk appeared at UFC 181 in December 2014 to announce that he’d signed a contract to fight in the UFC. He began his MMA training a month later. The combination of the physical fitness and ability to take a beating earned through his life in the choreographed stunt work of professional wrestling and just over a year and a half of MMA training wasn’t enough to help Punk establish himself in mixed martial arts. His one and only fight ended in a submission loss when UFC Welterweight Mickey Gall caught him in a rear-naked choke 2:14 into the first round at UFC 203.

At least The Evolution of Punk, the documentary series that the UFC made in the months leading up to his fight, was more interesting than the fight itself.

From 1994- 2002, Eric “Butterbean” Esch ruled professional boxing as the “King of the 4 Rounders.” A year later, he was competing in kickboxing after being recruited by the legendary K-1 promotion. In late 2013, he made his MMA premiere, also with K-1. It wasn’t an auspicious debut. Esch’s lack of grappling background led to him tapping to Genki Sudo’s heel hook at just 41 seconds into the bout. But Butterbean was not deterred. While he never replicated his boxing glory in kickboxing or MMA, he did go on to have a somewhat respectable career in the latter, with a 17-10-1 record and fights in both K-1 and PRIDE.

Sumo vs Savate and American Kenpo

Before it was a mixed martial arts promotion, the Ultimate Fighting Championship was a series of pay per views that mixed martial arts by pitting them against each other to determine both who was the best fighter and who had the best fighting style. Although sumo’s use of leverage would later prove itself useful to the next generations of MMA fighters, its first forays into Ultimate Fighting were far less successful. Retired champion sumo wrestler (and future Hawaii Five-O star) Teila Tuli lasted only 26 seconds as a result of a headkick from savate fighter Gerard Gordeau that cost him both a tooth and a TKO loss at UFC 1 in 1993.

All American wrestler turned sumo star Emanuel “Manny” Yarbrough lasted four times longer in his bout at UFC 3 the following year , but lost via TKO to Kenpo Karate and Taekwondo black belt Keith Hackney. Yarbrough’s significant leverage skills were impressive – he actually pushed Hackney out of the cage early in the match – but was ultimately no match for the karate master’s palm strikes. Yarbrough went on to become the World Amateur Sumo Champion in 1995. He briefly returned to MMA in 1998 for one win (via smother) and one loss.

Jujutsu and Gōjū-ryū Karate vs Ninjutsu: The Ultimate Fighter 3 Finale

UFC 3 ended with a very different style clash when Gōjū-ryū karate black belt and former Sport Jujutsu champion Harold Howard squared off against Steve “Ninja Cop” Jennum, who billed himself as a ninjutsu fighter, in the finals. Although Jennum demonstrated at least some skill in the Octagon – he made the highly decorated, well-rounded, and successful Howard submit to punches at the 1:27 mark – he didn’t exactly prove his ninja skills or education in the process. 23 years later, his training under controversial “King of Combat” Robert Bussey is the closest thing he appears to have to a shared background with the Ninja Turtles.

Brazilian Jiu-Jitsu vs Everything: AKA Royce Gracie vs Everyone

Royce Gracie’s runaway success in the early days of the Ultimate Fighting Championship revolutionized the way that fighters used grappling in MMA. And for good reason. His use of Brazilian Jiu-Jitsu and its leverage-heavy groundwork, which was almost unknown in North American fighting at the time, allowed him to plow through every size and shape of fighter from every conceivable martial arts background and clench top honors at UFC 1, UFC 2, and UFC 4.

Although he had to pull out of UFC 3 after a first round victory due to injury, Gracie was back in fine form at 4, using his BJJ to overwhelm and submit Chinese Goju founder Ron van Clief, TKD and Kenpo black belt Keith Hackney and wrestling judo, wrestling, and sambo legend in the making Dan Severn.

Are you excited for the possible Mayweather vs McGregor fight? What’s your favorite martial arts style clash? Let us know in the comments!

And check out our online store for all of your boxing, MMA, BJJ, wrestling, and karate needs and more!