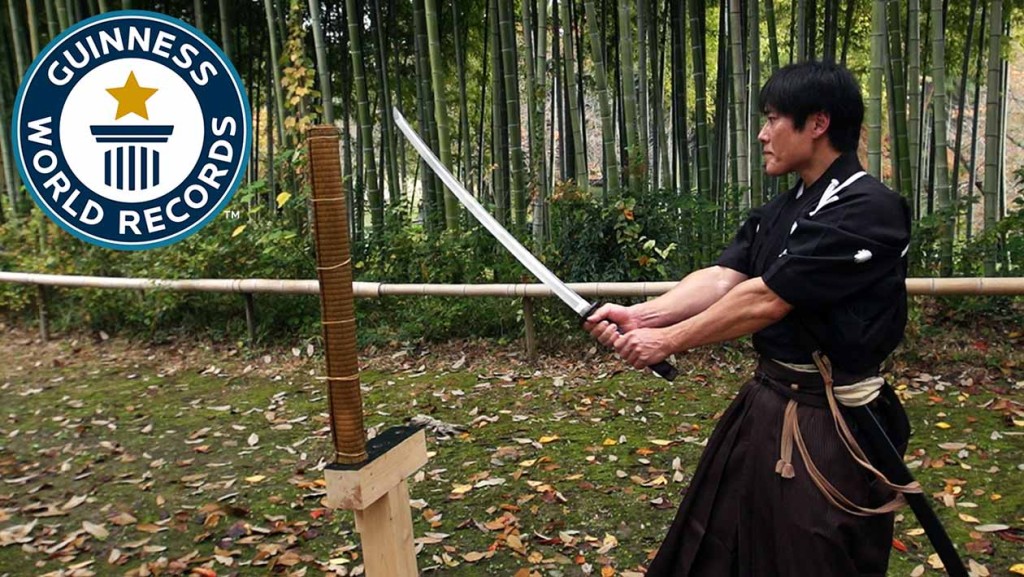 To accomplish this, Machii couldn’t just indiscriminately chop away at any size of mat. The task came with some very detailed specifications. “The rules for this title state that the straw shafts must be a minimum of 90 cm in length and clearly divided into four sections of 15 cm,” Guinness’s Rachel Swatman reports. “The cuts must then be made in the 15cm sections marked on the shafts.”

Luckily for Isao Machii, precision and speed are his specialties. He successfully set a new record with 87 cuts. That’s 1.3 extremely precise katana strikes per second!

It turns out that Machii isn’t just a master of the katana, he’s also swiftly mastering the art of setting world records. “I see Guinness World Records as a way of securing my legacy … a great way for me to have my name go down in history around the world,” he told the official Guinness website.

And he’s well on his way to establishing quite the legacy for himself. This most recent success marks the sixth world record, joining Fastest Tennis Ball Cut By Sword, Fastest BB Pellet Cut By Sword, Most Sword Cuts To Straw Mats In Three Minutes, Most Martial Arts Sword Cuts To One Mat and Fastest 1,000 Martial Arts Sword Cuts (which we included in our list of wild and wonderful records last summer) that he’s earned in the Guinness books.

Born on August 20, 1973, Isao Machii began training in martial arts when he was 5 years old, specializing in the long sword and archery. He is currently the headmaster of a dojo in Kawanishi, Hyōgo, Japan. He also runs a YouTube channel, which is a wealth of fascinating videos of techniques and practice.

When he’s not training the next generation of katana masters, he’s busy honing and sharpening his own skills. Here’s some footage of his preparations for his latest world record (complete with some very spirited support in the background):

Beyond his appearances on various Guinness programs across the globe, he’s also appeared on a number of Japanese and international televisions shows doing things like severing baseballs in half with his sword:

Or even blowing out candles with it!

When he severed a BB gun pellet in a 2010 episode of the U.S. series Stan Lee’s Superhumans, expert Dr. Ramani Durvasula attributed his incredible performance to his significantly above average brainpower. “This is about processing at an entirely different sensory level, because he’s not visually processing this,” she said on the show. “This is a different level of anticipatory processing, something so procedural, so fluid for him.”

“A normal person would take three tenths of a second just to register the sound of the gun being fired before they can even start to think about reacting,” host Daniel Browning Smith (who currently has one more Guinness World Record than Machii) went on to explain. “By the time they’d move the sword into position, the pellet would have travelled past them.”

While this might seem intimidating to any martial artists or aspiring samurai who weren’t blessed with superhuman processing abilities, it’s important to keep in mind that Machii wouldn’t have a single world record to his name if he’d relied on his natural gifts alone. He’s spent his whole life fine-tuning the miraculous level of hand-eye coordination that now makes his so successful. So if you’re still working to develop your own combination of natural talent and highly practiced skills, keep going! Hard work is still the most important part of achieving any martial arts – or life – goals.

Just don’t expect to be smashing any katana-related records any time soon. Isao Machii might have those locked up for a little while yet.

What do you think of Isao Machii’s world records? Is he a modern day samurai? Let us know in the comments!

And be sure to check out our online store for all of your own martial arts needs. We’ve got a large katana selection if you’re looking to break any World Records!