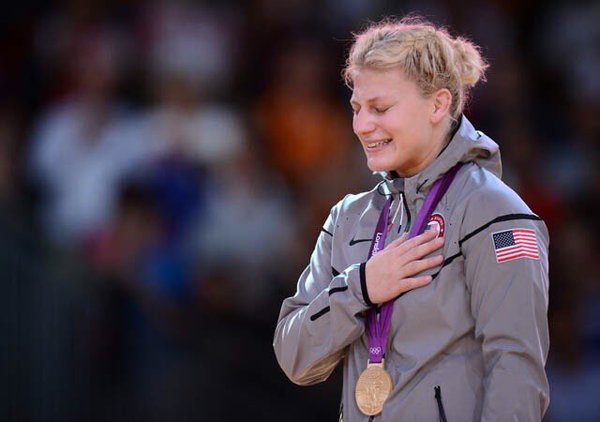 On August 11, American judo star, philanthropist, and role model Kayla Harrison won gold in the women’s 78 kilogram weight class at the Rio Olympics. Then the two-time Olympic champ (and only American to win any gold medal in judo, let alone two) announced that she was retiring from competitive judo.

“I think no matter what my judo legacy is fulfilled and I’m happy and happy with my career,” she told reporters after the gold-winning match. “Now it’s time to go and continue to have a legacy off the mat and try to change the world.”

Speculation about Harrison’s future began before she could even begin to enjoy retirement. Would she follow in her former teammate Ronda Rousey’s footsteps and test her judo skills in the MMA cage?

At the time, Harrison was conflicted about the idea. She told TIME Magazine that she felt that MMA was more like entertainment than a sport, and found a certain segment of MMA fans much meaner than she was used to. On the other hand, she was curious about her potential in the sport, and felt that the higher profile that would come with a mixed martial arts career could help bring more attention to the Fearless Foundation, an organization that she formed in 2012 to “shine a light on the darkness that is child sexual abuse and to enrich the lives of survivors through education and sport.” (Harrison herself is a survivor.)

“Who doesn’t want to be rich and famous at some point in their life?” she mused. “It’s a huge opportunity for me and I think I could be really really good at it.”

After a few months of careful consideration – and maybe even a little well-earned rest – Harrison made her decision. On October 27, 2016, she announced that she had signed with the World Series of Fighting (WSOF) to work as a commentator and a brand ambassador and, eventually, a fighter. She will compete in their 145 pound division.

“I’ve been boxing and doing jiu-jitsu and all that, and the biggest thing for me, really, is that I miss competing. I miss fighting on the highest stages of the world, and the World Series of Fighting really gave me a great opportunity,” she told USA Today. “I just want everyone to be excited and expect big things from me. This is only the beginning.”

Days later, she told TMZ that she was getting a lot of help from her former teammate (and friendly rival) Ronda Rousey as she prepared for her professional MMA debut.

Here’s a match the pair had at the 2005 World Judo Championships:

“Four years ago, if I wanted to be an MMA athlete, it’s not something a female could really make a lot of money doing,” Harrison told the New York Times in December. “[Rousey] trailblazed a way for girls like me who want to make some money. I’m hoping to stand on top of her shoulders and continue to have judo girls kill it in the cage.”

She went on to talk about the ways in which her world class judo background gave her an advantage in her mixed martial arts training – and how exciting is was to be learning a whole new set of skills again.

“I feel I have a great base, because judo is takedowns and finishes, armbars, chokes. When you’re doing judo, you’re gripping, your hands are moving, so I already have that spatial awareness for striking, which I think gives me an advantage learning a new sport,” she said. “I’ve been doing the same thing for 20 years. Everything I do in judo I learned in the first six months […]. Now I’m learning new things. I’m learning heel hooks and knee bars and a jab and a hook, uppercuts. It’s invigorating.”

Training makes me happy. And sweaty. thanks to John for helping me learn the sweet science! If you live on the #NorthShore and want to learn from the best check out Johns classes Tuesday and Thursday at North Shore Performance Training! #GettinReady #WatchoutWorld

Harrison made her debut as a commentator at WSOF’s New York City event at Madison Square Garden on New Year’s Eve. And although we’re still waiting for a date and opponent for her very first fight, some MMA experts are already considering her one of the greats. Bleacher Report’s Steven Rondina named her one of the top ten Olympians competing in MMA earlier this week, writing:

“It may seem presumptuous to include Kayla Harrison on this list before she has competed in MMA, but she deserves to be here given her pedigree. In 2012, Harrison became the first American to win gold in judo with an impressive performance that saw her ippon her way to the gold-medal match and shut out hometown favorite Gemma Gibbons to seal the deal. Then in 2016, she waza ari’d her way through the field to capture her second gold medal. She signed with World Series of Fighting in October and instantly became one of the hottest prospects in women’s MMA. Her debut will likely come later this year, and it’s a must-watch fight.”

As for Harrison herself, she remains confident in her significant skills, but she did also admit to the New York Times that she’s got some first fight jitters to work out before the big day.

“Judo is controlled violence,” she said. “Judo in Japanese means ‘the gentle way.’ It’s about disarming your opponent or defending yourself, but never killing them. But MMA is modern-day gladiating. So, yeah, I’m scared. Absolutely. I would be foolish not to be.”

Are you excited for Kayla Harrison’s MMA debut? Are you ready to see some Olympic Gold-level judo in the cage? Let us know in the comments!

And be sure to check out our online store for all of your judo and MMA training needs!