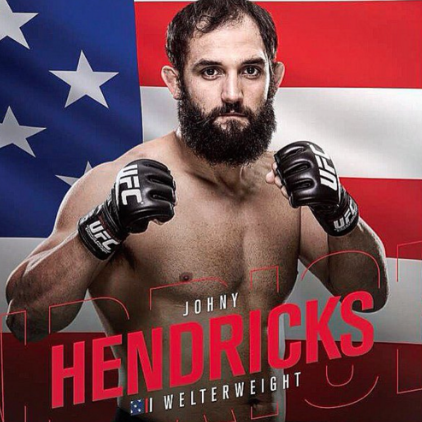 The last time we saw former UFC welterweight champion Johny “Bigg Rigg” Hendricks in the Octagon, he suffered a devastating first round KO loss to rising karate and kickboxing star Stephen “Wonderboy” Thompson this past February. Despite the fact that it was a major upset for the highly-favored Hendricks – not to mention the first time he’d been finished in his entire mixed martial arts career – Bigg Rigg took the defeat about as well as any elite athlete possibly could. In post-fight interviews, he thoughtfully broke down the factors that had contributed to his loss and gave the increasingly impressive Thompson his due. He also took a moment to reflect on the one big thing he had done right going into that fight.  After years of struggling to make the UFC welterweight division’s cut off of 170 pounds, the burly Hendricks, with the help of nutritionist Lou Giordano, had finally found a diet and routine that worked for him, and easily came in underweight.

Since then, Hendricks has been back in the gym, building on the lessons that he learned last winter, continuing to eat properly, and preparing for his big comeback match against Kelvin Gastelum at UFC 200, which is taking place on July 9 in Las Vegas. He also welcomed a brand new member to his family during this time.

Asian World of Martial Arts recently had a chance to sit down and talk to John Hendricks about his training, his nutrition, and the possible return of his old foe Georges St-Pierre. Here are some highlights from that conversation:

A family that rolls together stays together! #mma #jiujitsu #family

Rest is such an important component of any training program or camp, but you have a newborn son at home right now. Is sleep going to be a factor for you going into this fight?

You know what? No. My wife, she breastfeeds. So he wakes up right around 12 and then he might sleep until 5 in the morning. She’ll feed him at 5 and then go work out and he won’t wake up until 9 in the morning. Sometimes it might even be 10. He eats like 4 to 6 ounces at a time. So he’s going to be a big little kid.

Light bag work cool down after my #training session the other day. What is your favorite cool down exercise ? #mma #ufc #fitness #ufc200 @hypnotikbrand

I’ve rarely seen someone come out of a loss as clear-headed and forward-thinking as you were after your fight with Thompson. What did you learn from that experience?

Just …. enjoy it. And not only that, but a part of me came out with a win, because I made weight.

After that, my coaches even said “After you made weight, you were too relaxed.” And I was. Taking nothing away from Stephen Thompson, my main battle was the weight. Can I still make 170? I’m not a big guy, but I’m big, and so we didn’t know. It was something that my nutritionist and I had to find out. My weight is actually doing a little bit better than last time, so the weight is not even an issue now.

After Rory MacDonald’s loss to Thompson at UFC Ottawa, it’s looking like you aren’t the only person who might have underestimated him.

Well, I think what it is is that Rory saw how he fought me. So he was probably thinking that he might do the same thing. I didn’t get to see that fight because I have four kids and I was doing family time. But what I’ve understood of the fight is that it looked like he was sort of waiting for him to move so he could react.

And with [Thompson’s] karate style, what I’ve learned from fighting him is that I had the right game plan, I just got caught up in my emotions. When he started running so hard, I should have taken the center of the Octagon – like I did – but I shouldn’t have been saying “Fight me!” I should have been saying “OK. Run. I’ll be here.” But I was so frustrated that he was running the way he was, I literally took the center of the Octagon, and I stopped moving myself. So that was a bad combination, definitely, for a fighter.

And that’s something I’ve taken from that. I need to start training for this, because what if the next opponent does that? What if Kelvin does that? So I’m training that right now. I’ve got [sparring partners] that are coming forward, guys that are backing up, guys that are moving and not wanting to stay in front of me. I’m starting to learn that some fighters might want to fight me that way, because they don’t want to get hit by me. All right. Understood. Now I have the right mindset to do this. And then I can move forward.

What do you believe has been your biggest improvement over the past year? Has it been your weight management?

Yes, it’s definitely been the weight. Like I said, it’s either you retire or fight at 185. So having Lou Giordano, or “Lou Trition,” on my side has been a huge help.

Do you feel stronger under these more measured weight cuts with Lou Trition?

Yes, I do. And I don’t feel as bloated after. This next weight cut is going to be pretty sweet because I think they’re changing it to a morning weigh-in.

I can wake up at 8, be on weight, eat breakfast, eat lunch, eat dinner and eat another dinner and I’ll be at 185 in the Octagon instead of 178 like I was last time. Last time I felt like I was getting bloated if I crushed too much stuff, because… let’s say you get back to the hotel by 6 and you’re going to bed by 12. You’ve only got six hours to eat. Then, the next day, you can’t load yourself because you’ve got to fight that night. You can’t crush things because you’ve got to play it smart. I think that now I’ll be able to refuel my body the right way and have more energy.

Finally, Georges St-Pierre [who defeated Hendricks via a highly contentious split decision in 2013 to retain the welterweight belt] has recently declared that he’s ready to return to the UFC. Is that on your radar at all, other than people like me asking you about it?

It’s not on my radar. For the longest time, nothing else was on my radar except for one thing. and now… Sometimes I think I get so caught up in everybody asking me other things. I’ve got to focus on Kelvin. I can’t focus on GSP or anybody else. None of that matters. I’s only Kelvin and that’s all that I am focusing on. Now, after the fight, if they said “Hey, Johny! Would you like a rematch?” Cool! And if I have to go to 185, I’ll do it. But as of right now, let him be. Let him keep talking. Let him do what he wants to do. I’ve got to get through Kelvin. 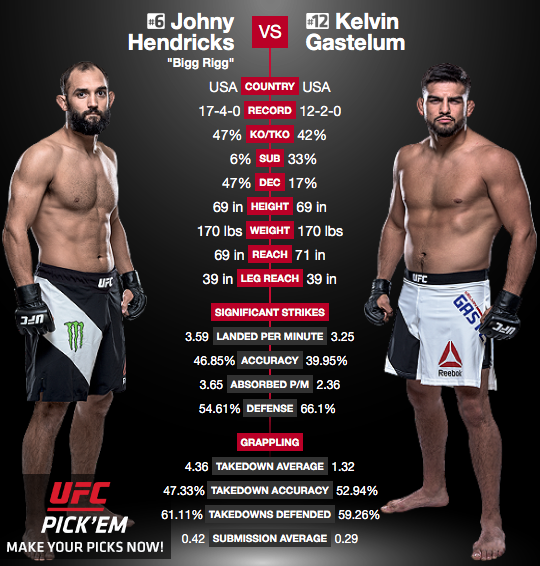 Will you be watching UFC 200? Who do you think will win? Let us know in the comments!