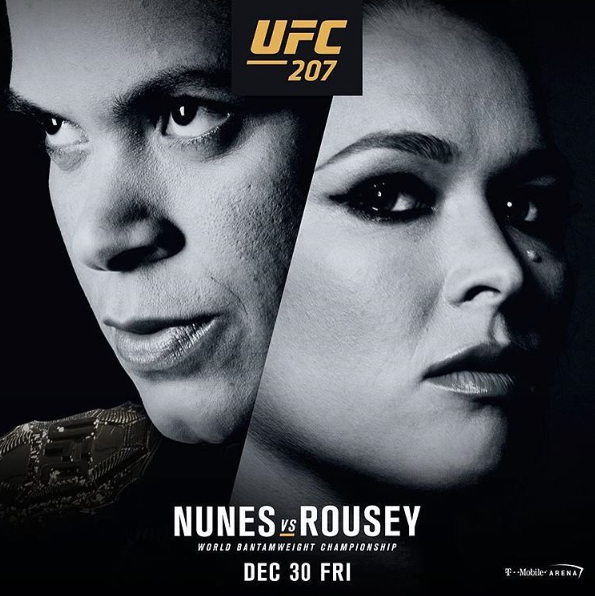 UFC president and mouthpiece Dana White was met with more than a little suspicion and incredulity when he claimed that “Rowdy” Ronda Rousey was “by far, the biggest star, ever” in the promotion’s history in an interview with Hot 97 last week. In light of the massive media explosion that erupted in the wake of this week’s big Rousey-related news, though, it’s starting to look like he might not have been exaggerating.

On Wednesday, October 12, White appeared on the Fox Sports 1 program The Herd With Colin Cowherd to announce that, after over a year away from the sport, the former women’s bantamweight champ would be returning to the Octagon for a title shot against current champ Amanda Nunes at UFC 207. The event will take place at the brand new T-Mobile Arena in Las Vegas, Nevada, on December 30.

The announcement immediately became international news, landing coverage in the usual publications like Bloody Elbow and ESPN, and the occasionally MMA curious outlets like Rolling Stone and The Guardian. Even places that usually show little to no interest in the sport, like the popular celebrity gossip blog Just Jared, got in on the action.

Just under a year after her less than glorious defeat at the hands and devastating shins of Holly Holm, who handed Rowdy her first ever professional loss at UFC 193 – and after eleven solid months of speculation as to whether or not she’d ever return to the Octagon – Rousey has just proven that she can still capture the imagination of even the most casual MMA fan.

Supporters and detractors alike are eager to see if she still has what it takes to redeem herself. Her KO loss to Holm wasn’t just humbling, it was nothing short of earth-shattering. The once seemingly invincible and cocky Olympic bronze medalist admitted that she had suicidal thoughts after the bout in an emotional appearance on Ellen earlier this year.

Despite her insistence that she would be back, many wondered if Rousey really had the interest or the ability to return to the sport that made her a breakthrough star. Now that she’s finally coming through on that oft-doubted promise, it will be interesting to see if she still has that indiscernable “it” factor that made her such an intimidating and intoxicating force in MMA.

Perhaps no one is more invested in Rousey’s return than her fellow competitors. The women’s bantamweight division has been playing hot potato with the belt ever since Rousey’s departure, making the Rowdy one’s place in the greater contender picture less and less clear as time went on. Holm, who claimed the belt from Rousey at UFC 193, lost it at UFC 196 in March when perennial #1 contender Miesha Tate caught her with a rear naked choke in the fifth round. Amanda Nunes then used a rear naked choke of her own to submit Tate at UFC 200 in July to make her the new champ – which now makes her Rousey’s next opponent.

Nunes, for her part, is thrilled with this development, telling TMZ that “I’ve been training for Ronda Rousey since my first fight in the UFC” and that she will “200%” defeat Rowdy. She also argues in favor of the former champ getting an immediate title shot upon her return, saying that “she was the most dominant athlete. I think she really deserves that.”

Other athletes are somewhat less enthused by Rousey’s ability to step right back into the title picture after such a definitive loss and such a long absence, though. Julianna Peña, the TUF 18 champ who appeared to be in line for a shot at the belt of her own after her impressive victory over Cat Zingano at UFC 200, is not impressed by this turn of events.

“It’s bull****,” Peña told MMA Fighting. “That spoiled brat has gotten everything handed to her, and she’s getting everything handed to her again. It’s bull****. I have no idea. Never in the history have I ever heard of somebody have a no-controversy brutal knockout, then quit the sport, and then comeback and get a title shot right away. The girl is mentally weak and Amanda Nunes is going to f***ing knock her out and expose her a**. She’s literally the worst fighter on the roster, and I can’t stomach the fact that I’m not getting the title shot. I don’t know how they conduct business over there, but they’re going to do what they want no matter what, so there is not really much I could do. Back to the drawing board I guess.”

Peña went on to say that she is considering her options with other promotions as a result of this development.

Cris “Cyborg” Santos, the Invicta FC featherweight champion who has been almost literally killing herself to make weight for 140lbs “superfights” in the UFC as part of her years-long campaign for her own shot at Rousey, was even more disappointed in this turn of events. She now believes that a fight between her and Rousey – perhaps the single most anticipated fight in the history of women’s MMA – will never happen. “The ridiculousness of Ronda getting a Title Shot after a loss and a year layoff just goes to support the story that she was created by the Media. More than any fighter who has ever existed, Ronda has benefited by company branding. She has benefited from the best interviews, the best sponsors, and the best fight promos and spotlights, but even with all of that marketing budget behind her, everyone has seen that she is not the best. The best don’t lose like she did in Australia, and they certainly don’t take a year off after such a performance,” she wrote in a post on her official Facebook page.

“I’m disappointed Ronda didn’t accept my offer to fight Super Bowl weekend, but I am not surprised. She already turned down the opportunity to fight me at UFC 205 which has continued to open the door for Conor McGregor to continue growing into the biggest star the UFC has ever promoted, because he is willing to walk the walk, and she is afraid to back up the years of media bullying she’s done towards me.”

Dana White insists that all hope is not lost, though, and Rousey will fight Cyborg… so long as she can get past Nunes at UFC 207. “Ronda wants [to fight Cyborg],” White said during an appearance of Fox Sports 1’s Speak For Yourself. “It will be the biggest pay-per-view in UFC history. I don’t know if it will happen [right away if she defeats Nunes] — we’ll see what happens. This thing has to play out first.”

Are you excited about Ronda Rousey’s return? Do you think she can defeat Amanda Nunes? Will we ever get to see Rousey vs Cyborg? Let us know in the comments!

And be sure to visit our online store for all of your MMA training needs!