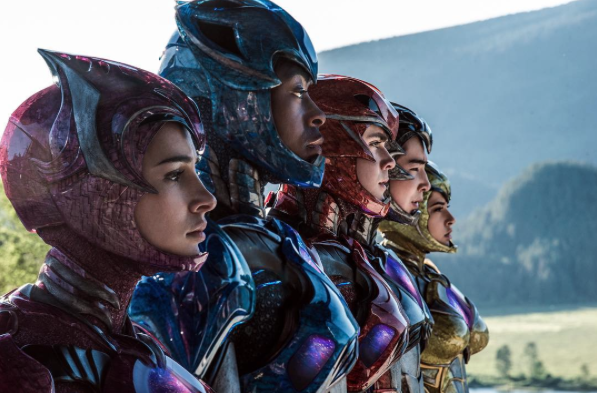 Its theatrical release is still over five months away, but the promotion for the new Power Rangers movie is starting to ramp up now. This wave of publicity started at New York Comic Con at the beginning of the month where the film’s producers, Lionsgate, launched a brand new teaser trailer and hosted a panel featuring the film’s director and members of the cast. And the new posters, details, and even potential spoilers have been coming ever since.

It’s been a while since we’ve checked in on the big screen adaptation of the beloved franchise (and worried about its armor situation), so let’s take this week’s blog to catch up with the latest from the Power Rangers camp.

The biggest news is, of course, the trailer, which gives us our first extended look at what kind of tone and plot we can expect from the film and gives us a better glimpse at the new faces that will be going under the iconic rainbow helmets.

If the mood (and Halsey’s low key cover of “I Walk The Line”) of this trailer is any indication, we could be looking at another entry in the current crop of somber and serious takes on more playful source material, a la Batman, G.I. Joe, and many more. It’s also starting to look like we’ll be getting another origin story with this film, which has also become a staple of the superhero genre.

At least one critic’s on side so far, though: “I expected this to be a full-on cheesefest, but I think, maybe, possibly, it’s not?” The Verge’s Jacob Kastrenakes wrote on October 15.  “This first trailer for Power Rangers is weird. Like it’s this super-glossy Transformers-esque world, but shot at canted angles and filled with intentionally (I think) goofy melodrama. We still haven’t seen much, but maybe this could turn out better than what the phrase ‘Power Rangers movie’ might lead you to expect. Or maybe I’m just being way too generous here. It’s out next March.

At the NYCC panel, director Dean Israelite said that he was “making a movie about growing up,” Entertainment Weekly reports. “I wanted to make this a grounded, character-driven origin story that was always set to the backdrop of this fantastic adventure.”

He also said that “I wanted to remain true to the spirit of the franchise that I grow up on and loved” and promised that he and his team “worked really hard to re-imagine it and reinvent it.”

Becky G, who plays Yellow Ranger Trini described the part that stunt work played in that reinvention. “[Our] stunt doubles went out of their way to develop our fighting style,” the singer and actress, who took up MMA training for fitness last year, enthused. The stars themselves were no shrinking violets when it came to the film’s action sequences. Naomi Scott, who plays Pink Ranger Kimberly, even confessed that she “literally punched someone on the mouth and made them bleed – one of our stunt performers” during her first day of fight filming.

In the spirit of staying at least partially true to the original series, Israelite went on to reveal that Goldar, Rita Repulsa’s famous henchman, would be making an appearance in the film. And he confirmed that, as the series of ComicCon posters that was released at the end of September suggested, the zords will also be a part of this new take on the universe.

Here’s a look at one of those zord posters:

His other ride’s a minivan. #GoGo #BlueRanger! #PowerRangersMovie – In theaters March 24, 2017.

Last week, the movie released yet another series of posters, this time giving us another glimpse of the much-debated armored suits that the new Rangers will be wearing. (They also released official Power Rangers filters if you’re into Snapchat!)

Here’s a look at Zack the Black Ranger’s suit and poster:

And here’s Kimberly the Pink Ranger’s:

You can find the rest – and a bunch of new stills and promotional information – on the film’s official Instagram page.

In addition to all of this promotion, the Power Rangers team have also reassembled to take care of some last-minute reshoots, and one of the locations has fans speculating about a certain and possibly tragic plot point. Check out this report if you’re curious and don’t mind potentially being spoiled.

If you’re just not ready to move on from the original group of Power Rangers, then there’s another tidbit that came out of NYCC that might be of more interest to you: Jason David Frank, who played Tommy Oliver, the Green Ranger from Mighty Morphin Power Rangers, also had a new trailer to promote at the convention (Ninjak vs The Valiant Universe). In an interview with ComicBook.com to promote his new web series, the actor and MMA fighter (who still wants to face CM Punk) shared the following information about his long-promised return to the green spandex for the show’s original producers. “We’re talking with Saban about the Green Rangers series,” he promised. “That’s still very possible with that.”

Are you excited about the new Power Rangers movie? Or are you more into the return of the Green Ranger? Let us know in the comments!