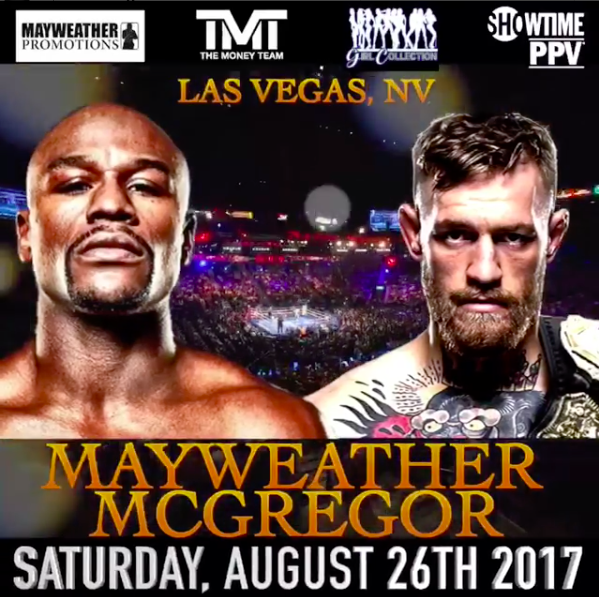 After years of speculation, rumors, excitement – and one blog AWMA blog post about combat style clashes to help get us in the mood – it’s finally on! Boxing legend Floyd Mayweather will face rising MMA star Conor McGregor in a boxing match in Las Vegas this summer. Yahoo! fight reporter Kevin Iole first broke the story of the fight’s confirmation earlier this month and new details have been pouring in ever since. Let’s take a look at what we know so far:

What, Where, And When?

The highly anticipated superfight will take place on August 26, 2017, at the T-Mobile Arena in Las Vegas. The bout was originally slated for the iconic MGM Grand just down The Strip, but a scheduling conflict has forced a location change to the newer venue. Despite some rumors that kicks below the waist would be allowed, or that the fight would take place in a cage, the bout will be a proper 12-round boxing match fought with 10 ounce gloves. It will be contested at 154 pounds.

As Fox Sports reported in their timeline of talk between the Mayweather and McGregor camps, the idea for this historic event came out of a throwaway comment on a talk show. When Conan O’Brien asked McGregor if he’d be interested in a boxing match during an appearance on his show in July, 2015, the Irish MMA star responded enthusiastically. “If you’re asking would I like to fight Floyd Mayweather — I mean, who would not like to dance around the ring for $180 million?” he quipped. In early 2016, the two traded barbs in the media and, by May 2016, sports writers started to report that the two might actually face each other in the ring. UFC head Dana White initially dismissed the rumors – which Mayweather then admitted that he himself started – but later admitted that he was open to the possibility.

The two men spent the news few months casually trolling each other in the media, but things started to get serious again last November, when McGregor obtained a boxing license to fight in California. Mayweather called it a stunt, but also offered to continue negotiations… with an insultingly low offer. As 2017 rolled around, the trash talk and idle public negotiations continued. Then, last month, all of these hypothetical considerations became a lot more concrete with both Mayweather’s team and Dana White confirming that they were close to reaching a deal. On June 15, 2017, the Nevada Athletic Commission officially approved a boxing event on August 26, 2017. All parties involved quickly confirmed that this event would be Mayweather vs McGregor.

According to Yahoo!, Las Vegas odds currently place Floyd Mayweather Jr. as the minus-1000 favorite to win the fight. The boxer, who is considered the greatest fighter of his generation – and one of the greatest of all time – retired from fighting in 2015. “Money” Maywather earned a perfect 49-0 record over the course of his 19 year career as a pro fighter, 26 of those wins via knockout. He was only knocked down one single time during any of his pro fights, when Carlos Hernandez temporarily sent him to the canvas in their 2001 fight, but Mayweather rallied and managed to win that fight via unanimous decision.

Coming out of retirement for this one final fight with McGregor doesn’t just give him a chance at once last astronomically high payday (current reports put his take at over $100 million for this bout), it will also give him a chance to earn the greatest undefeated boxing record in history. If he beats McGregor on August 26, he’ll top the legendary Rocky Marciano’s 49-0 by one victory.

Here he is in action preparing for the fight:

“The Notorious” Conor McGregor’s current Vegas odds are an unenthusiastic plus-650. The fighter does have a background is in pugilism. He took up the sweet science as a 12-year-old and successfully trained and competed for 4 years before setting his sights on MMA. But he hasn’t participated in a pure boxing match since he was a teenager. As a mixed martial artist, McGregor has a 21-3 record – and a 9-1 record in the UFC – with his only recent loss coming at the hands of Nate Diaz in 2015. (He avenged that loss with a decision victory over Diaz the following year.) He won the UFC Featherweight Championship at UFC 194, and the UFC Lightweight Championship earlier this year, making him the first fighter in the promotion’s history to hold the belts for two weight divisions at the same time. This will be his first professional boxing match.

Here he is in action preparing for the fight:

Vegas oddsmakers aren’t the only ones who think that Mayweather will walk away with a win over McGregor that night. The Independent reports that Mike Tyson, Sugar Ray Leonard, UFC announcer Joe Rogan, and former UFC Featherweight Champion Jose Aldo have all said that it’s Money’s fight to lose. The only notable voice to potentially put their faint praise behind McGregor in this exchange is, oddly, Nate Diaz. “I think it is a publicity stunt but McGregor, when it comes to boxing, is good. He’s got a good chance to make something happen in two or three rounds. If anything, he has two or three good rounds,” Diaz speculated. “He’s got an amateur style; he’s got good movement and good punches for six or eight minutes… He’s got a puncher’s chance, if anything.”

We’ll see who’s right in a little over two months!

Are you excited about the fight? Who do you think will win? Let us know in the comments!

boxingCONOR MCGREGORFloyd MayweatherFloyd Mayweather vs Conor McGregorMayMacMayweather vs McGregormixed martial artsmma
« Previous PostWhat Are The Differences Between Karate, Jiu-Jitsu, Taekwondo and MMA? Next Post »The Benefits of Martial Arts Training With Your Significant Other