The Star Wars: The Last Jedi Cast Reflects On The Intense Martial Arts Training That Went Into Making The Film 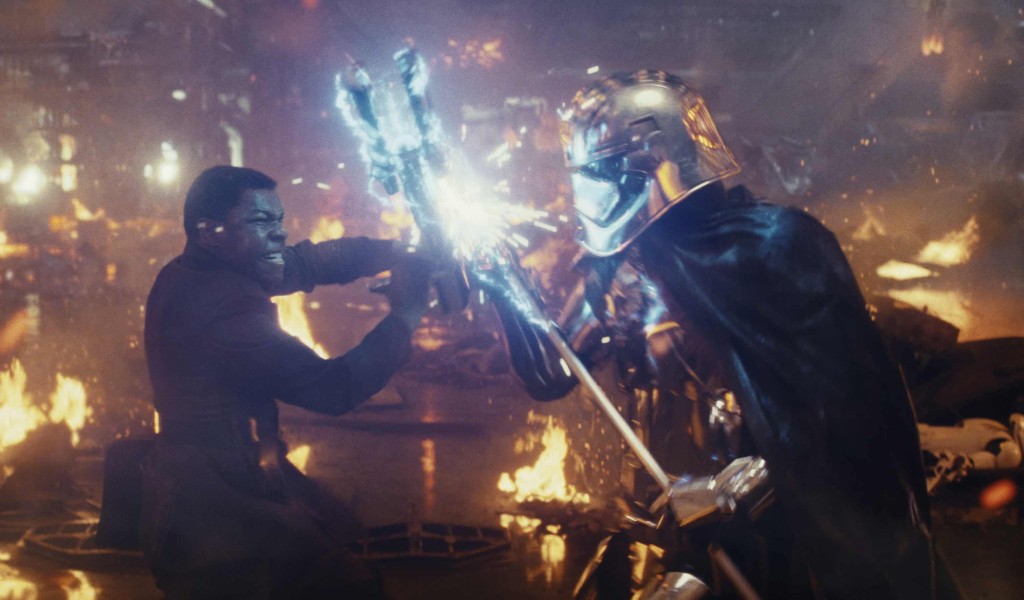 John Boyega faces off against Gwendoline Christie in this still from Star Wars: The Last Jedi

In the middle of promotion for Star Wars: The Force Awakens, US Weekly asked Daisy Ridley, who plays Rey in the franchise, what was on her bucket list for 2016. The rising star said that she’d like to learn a martial art.

It’s not hard to guess where Ridley developed a taste for training. The actress has been surrounded by martial arts luminaries since joining the Star Wars universe. As we wrote in 2015, her stunt double, Chloe Bruce, has championships and a world record to her name in addition to her impressive work on films like Harry Potter, Thor 2, and Guardians of the Galaxy. Ridley also had the chance to work with a sword fight expert straight from the battle-heavy Game of Thrones and take Bõjutsu training to allow her to handle Rey’s bo with confidence. “She learned the Bõjutsu fighting style,” Lucasfilm president Kathleen Kennedy said during a press conference in Japan in May, 2015. “Rey uses the staff she has in the trailer to fight. Daisy’s gotten to be so good at Bõjutsu that even grown men on the set fear it.”

In 2016, Ridley posted an Instagram video of herself working on her lighstabre techniques with Liang Yang, the actor and “Wushu fricking master”Liang Yang who played TR-8R in The Force Awakens. She’s since quit the social media platform, but the video is still available on YouTube and it looks like she can cross that goal off the bucket list:

And she didn’t stop there. In a new featurette about the intense physical preparation that cast members took on before filming the soon to be released The Last Jedi, Ridley raves about the mental challenges of her martial arts-based training.  “Physically, I never really had to push myself that hard and stamina-wise you’re like ‘Oh my God!’ It’s like a psychological thing of knowing that you can do it more and more and more.”

The featurette also treats us to some clips of Ridley trading in her Bõjutsu for sword-based lightsaber skills. And it turns out that she might be almost as much of a natural as her character is.

Ridley isn’t the only Star Wars star to proudly push themselves to their physical and mental limits for The Last Jedi. Later in the video, Gwendoline Christie, who plays Captain Phasma, says that preparing for the film was “the hardest physical thing I’ve done yet.”

This is an incredible statement coming from Christie, an actor who wanted the part of Brienne of Tarth in Game of Thrones so much that she actually started training herself just for the privilege of being considered for it. Things didn’t get any easier after she successfully landed the part, either. “Before I got the job, I did all that stuff where I trained and lost all the weight, and after I was signed for the second series—my first season—C.C. trained me for three months in fighting and swords. And they taught me to ride horses properly,” she told Vogue in 2015.

Preparation and filming for key battle scenes, like her battle with The Hound and her sparring session with Arya Stark, took days at a time to rehearse and film. “We worked really hard on it,” she told EW of the latter. “It’s exciting when you learn skills on a job but even more when you get to develop those skills. It was exciting to see that development somebody else too, in Maisie [Williams, who plays Arya].”

Christie and her GoT trainer teamed up again for The Last Jedi. “What I can tell you is that I was reunited with C.C. Smiff — he was the man who gave me the confidence and the skills and worked with me for months before and taught me to fight and sword fight,” she informed ABC News in a recent interview.

Christie went on to praise John Boyega, who plays Finn in the film and made it his goal to do all of the stunts in their big face-off himself, for the “vital energy that just really inspires everyone around him.”

New recruit Kelly Marie Tran, who is seen working with weapons and boxing in the featurette, is particularly enthusiastic about the breadth of training the cast experienced while making The Last Jedi. “What was cool was learning different types of fighting. It was intense and fun but really hard.’

While the training video only profiles the work of recent additions to the Star Wars universe, we have at least some evidence that veterans of the franchise were also working hard to maintain and/or revive their skills. In a brief video that hit the internet a couple of months ago, Luke Skywalker himself, Mark Hamill, was spotted swinging a lighsaber and briefly mentioned taking lighsaber classes.

Are you excited to see all of this hard work pay off in The Last Jedi? Are you ready to channel The Force in your own martial arts training? Let us know in the comments!

And check out our online store for all of your martial arts supplies needs. We might not have lightsabers, but we have swords to help you practice and a wide selections of bos to help you fight like Rey.