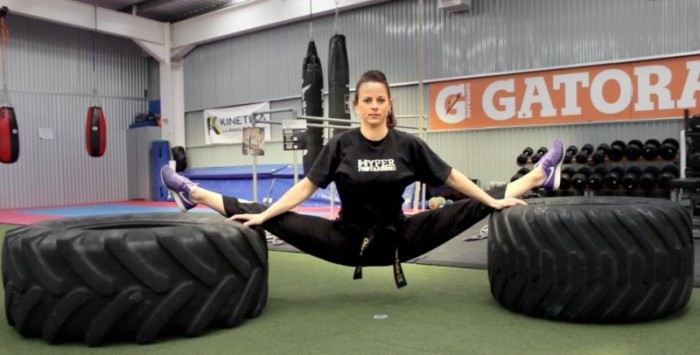 Rey, the heroine at the heart of Star Wars: The Force Awakens, has become nothing short of a pop culture phenomenon since the film debuted last week. The character has been hailed as a “feminist icon,” and the achievement of “peak strong female character.” She’s become an instant hero for girls across the world thanks to her intelligence, strength, and skill, and stores are having trouble keeping her action figures in stock. Even her few detractors have to admit that Rey kicks butt. In fact, their only argument against her is that she’s too good at what she does – a point that io9’s Charlie Jane Anders beautifully refuted earlier this week.

At least part of what makes this scavenger with Luke Skywalker-levels of Force so appealing are her combat skills. The Force Awakens cast and crew clearly put a lot of thought and effort into the mysterious character’s physical presence on screen, and it pays off incredibly well in her acrobatic fight scenes.

Daisy Ridley, the up-and-coming actress who plays Rey in the film, worked with a stunt expert from HBO’s enormously popular series Game of Thrones to prepare for the role. She also became quite handy with a bo staff thanks to her Bõjutsu training. “Daisy trained with the sword fight choreographer of Game of Thrones…She learned the Bõjutsu fighting style,” Lucasfilm president Kathleen Kennedy said during a press conference in Japan in May, 2015. “Rey uses the staff she has in the trailer to fight. Daisy’s gotten to be so good at Bõjutsu that even grown men on the set fear it.”

But Ridley wasn’t alone in her efforts to bring her character’s bo-wielding game to the big screen. As we celebrate the record-breaking success of the most beloved Star Wars movie since Return of the Jedi, let’s take a moment to learn a little more about the woman behind the woman behind cinema’s newest action hero: Daisy’s stunt double Chloe Bruce.

In addition to being one of the most sought-after young stunt women in Hollywood, thanks to her work in films like Harry Potter, Pirates of the Caribbean 4, Thor 2, and Guardians of the Galaxy (where she worked as Zoe Saldana’s stunt double), Bruce is also a highly decorated martial artist. She has a 4th Dan Black Belt in Tang Soo Do and has won multiple martial arts championship titles. She holds the Guinness World Record for most amount of kicks in one minute, clocking in at a whopping 212 kicks.

Bruce started training in martial arts very early on in life. “I learnt at a school in Essex, and I started in Korean Tang Soo Do – (A very similar style to Tae Kwon Do),” she told Experience Days Blog in a 2011 interview.  “I started originally because of my Brother, Danny Bruce. He was already training and I went along to watch some of his classes and really wanted to give it a go. My parents obviously encouraged me also as they thought it would be useful for a girl to know a little self defense… little did we know at the time though that Martial Arts would end up to be such a great career for me!”

She won her first championship title, in Korean Traditional forms, Musical Open hand and Musical Weapons, at her very first WKA World Championships in 1996. “I was only around 14 years old and I was the under dog having never competed at the Worlds before, so I went out there with nothing to lose. I travelled out with my brother Danny and my parents – and seeing their faces when I won was just so over-whelming. My parents were in tears and I was just so happy!! Standing on the rostrum whilst the whole tournament was up on their feet listening to the British National Anthem was just a memory I will never forget!”

She has been teaching and competing in martial arts ever since. In 2009, she formed a performance duo with her younger sister, Grace. “The Bruce Sistaz” auditioned for Britain’s Got Talent in 2011 and wowed the judges.

The pair made it to the live semi-finals of the reality competition before they were eliminated. They continue to perform and teach seminars together all over the world.

In addition to her efforts with Grace, Chloe started working on film sets. That’s how she stumbled into her current career. “I got into stunt work by chance to be honest,” she told Geek Girl Con in September. “I was working on the movie John Carter, and from there a fight coordinator noticed I had a talent for fighting and martial arts, and was going on to work on Wrath of the Titans and asked if I would come on board as the stunt double for the lead actress. It was an awesome experience and one I will never forget, as from there I have pretty much been non stop.”

Bruce went on to talk about how much she enjoys her gigs in the film world, particularly when she’s working as a stunt double. “You get to form a great bond with the actresses and learn to portray the character together. After all you are both out to achieve the best overall appearance for the character on screen. You can help train them and prepare them for the shooting days along with the stunt coordinators, and just generally form a great connection so that when you are shooting you get to help and rely on one another.”

Although she – like everyone involved in The Force Awakens – was unable to speak about her work in the Star Wars universe at the time, she was willing to say that Guardians of the Galaxy has been her favorite experience so far. Her signature move – an impressive display of flexibility and force that she calls the scorpion kick – even made it into the film.

Bruce also had to remain tightlipped about her future film gigs when talking to Geek Girl Con, but she did say that she would love to run her own school in the future. “For now I am just happy with where my career has taken me and so grateful for these opportunities that have already come my way.”

Just don’t ask her to follow in the footsteps of her fellow stuntwoman Zoë Bell, and star in her own movie any time soon. According to her official Facebook page, she’s “too shy” to act.

bo staffBruce SistazChloe BruceDaisy RidleyfilmStar WarsStar Wars: The Force Awakenstang soo doThe Force Awakens
« Previous PostEverything We Know So Far About "Birth of the Dragon," The New Bruce Lee Biopic Next Post »How To Make and Keep Your Fitness Resolutions in the New Year