How Actor Michael B. Jordan Trained For Creed 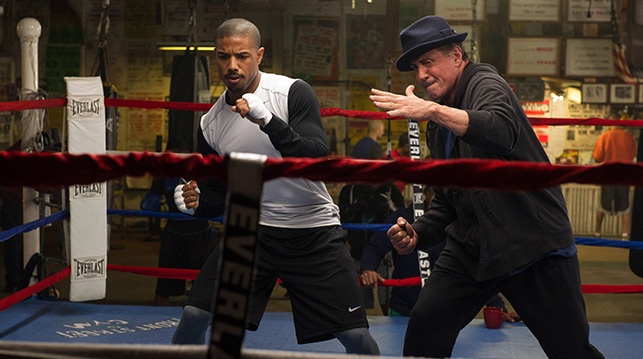 Is being a boxer more challenging and demanding than being a superhero?

The effort that actor Michael B. Jordan put into preparing for his role as Apollo Creed’s son, Adonis Johnson, in Creed would certainly suggest so. The Fruitvale Station and Friday Night Lights star was already in fighting shape when he started training for the the latest installment in the Rocky franchise  – he was still on the set for the latest Fantastic Four movie at the time, playing Johnny Storm, aka The Human Torch at the time – but he still needed to put on another 24 pounds of muscle to transform into a proper pugilist.

While working on Fantastic Four, Jordan started ramping up his exercise and his diet. “He was so annoying during our movie,” his co-star Kate Mara (Sue Storm, aka The Invisible Woman) joked to E! during Comic-Con last July. “Every 30 minutes he was eating something.”

“Literally in the middle of takes, I would just be eating food,” Jordan admitted in the same interview. “Chicken and rice and broccoli – a lot of it.”

This was the beginning of an almost year-long process for the actor in which he dedicated himself to an incredibly strict diet (“I gave up everything that was good in the world and ate everything that was bland,” he told The New York Times) and an intense training regimen that included weight lifting and, of course, boxing.

“It differed from week to week, but some days it would be boxing and weight lifting. Some days it would just be boxing and cardio,” Jordan, who has a background in combat sports thanks to childhood karate lessons, recently told US Magazine. “I worked out two to three times a day. I ate five to six times a day, every two and a half hours. I drank about a gallon and a half of water every day. Just doing that consistently for about 10 or 11 months, you see a physical change!”

He also trained with a number of professional boxers, not to mention one particularly famous fictional pugilist. Rocky Balboa himself, Sylvester Stallone, who has a supporting role in Creed, also stepped into the ring to give his co-star a few tips. “He taught me how to throw punches and hit me in my chest a couple times. Old dog’s still got a little bit to him!” Jordan said.

Gabriel Rosado, the Philadelphia middleweight and light middleweight boxer and lifelong Rocky fan who plays Leo “The Lion” Sporino in Creed, agreed with Jordan’s assessment of Stallone, telling TMZ that the 69 year-old legend was shadowboxing in between takes. He also said that he caught himself calling the actor “Champ” a few times, the way a younger boxer shows respect for veteran fighters. “Growing up watching Rocky and stuff, you really feel that he’s a fighter, so when I see him, I don’t see him as Stallone […] but you’ve got that image of Rocky all the time. Especially the movie being in Philly and I’m from Philly.”

But Rosad0 reserved his highest praise for Jordan. “Michael can throw down, man! If you sleep on him in the street, he might put you to sleep. He has some hands on him.”

Jordan has kept up a recreational boxing practice since wrapping Creed – “It gives me peace of mind sometimes,” he told US Magazine – but he’s quick to point out that he does not consider himself a competitive fighter. “I’m gonna be clear and set the record straight: I’m an actor. I am not a boxer. Not at all,” he told Entertainment Weekly Radio. “It was very humbling to get in the ring with a real boxer.”

Creed writer and director Ryan Coogler has admitted that Jordan’s ego wasn’t the only thing taking a beating when Jordan took on the pros. As Coogler told The New York Times, “pain was definitely involved” as well. “That was him taking real punches,” the filmmaker said. “That was all Mike.” He went on to say that the star used ice baths and a Chinese skin-scraping therapy called Gua Sha to help him recover from those physically intense scenes.

According to Jordan, the film’s fights were meticulously plotted and choreographed for maximum impact, and doing them himself was an integral part of his performance. “The way we approached it was that every punch was a line,” he told EW. “Every fight was its own scene. So we tried to look at it like that so you’re not just throwing punches for no reason.”

All of the thought that Coogler and Jordan put into their fight choreography – as well as the blood, sweat, tears, and tortured taste buds that went into preparing the actor for them – has clearly paid off. Creed opened to rave reviews last weekend, and the best box office debut in the history of the Rocky franchise.  Jordan’s performance is also starting to generate some early Oscar buzz.

To top it all off, Jordan is now saying that he’s eager to return to the ring for a sequel. “A character so rich as this, and the world he’s in, I want to see what happens to him next and what he does,” the actor told the Associated Press. “Especially the way it ends off, it’s pretty cool. I think with success and time and circumstances, it would be excited to come back and work with [co-stars] Sly [Stallone] and Tessa [Thompson] again.”

Have you seen Creed yet? What did you think of it? Is Michael B. Jordan as good with his hands as Gabriel Rosado says?