The Nunchaku: A Brief History Behind This Weapon 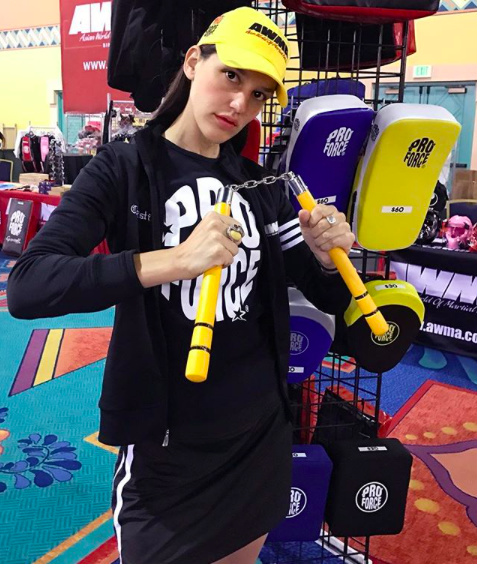 Nunchakus — sometimes  known as nunchucks — hold a unique place in martial arts — and in the imagination of many martial artists. They might not have the well-documented and storied history of the katana. They might not have the prominent place in training and competition that something like the bo does. But their somewhat mysterious origins only seem to make the weapon more fascinating. Their current use and legality — the nunchaku is still banned is certain parts of the world — only make us more curious.

Where did the nunchaku really come from? How did the nunchaku wholesale become such a pop culture icon? And how can we use nunchakus now? Whether you’re looking to learn more about this tool or wondering where you can purchase nunchakus wholesale, this introductory guide will help you begin your journey into all things nunchaku.

The Origin of the Nunchaku

Historians and martial arts writers hold a few conflicting beliefs about the true origins of the weapon that we now know as the nunchaku. While most seem to agree that it probably began as a non-combat tool in China and that it was adapted for self-defence purposes in Okinawa, what kind of tool it originally was, and who adapted it for what purpose is up for some debate. Some believe that the nunchaku was, much like the kama, a makeshift agricultural tool that was fashioned into a combat tool by farmers who were not permitted access to more traditional weapons. Others argue that its shape and structure would have made it impractical for agricultural purposes and that it might have been as a horse bridle. There’s also a theory that it was a self-defence tool used by richer citizens who wanted to protect themselves from robbery when they were out in public. What we do know for sure is that nunchakus were then embraced by martial arts, becoming a part of both Karate and Jiu-Jitsu training, and eventually becoming the nunchaku that we know today.

Nunchakus experienced a surge in popularity outside of the martial arts community in the early ‘70s when Bruce Lee’s iconic battle with the weapon in Enter The Dragon exposed the nunchaku to a whole new audience. Since then, the nunchaku has become a fixture in both eastern and western popular culture, appearing in video games (Mortal Kombat, Final Fantasy), films (Fist of Fury, Black Dynamite), comics (Daredevil), and other media. Nunchucks have also been prominently featured in the Teenage Mutant Ninja Turtles franchise as Michaelangelo’s weapon of choice. 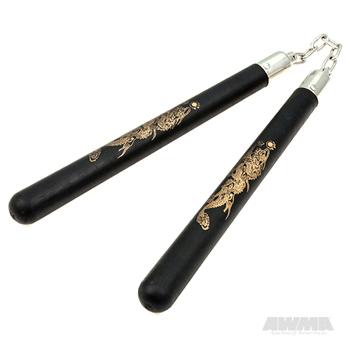 The nunchaku is not the most effective tool is pure combat situations today, but it is an excellent training aid for martial artists looking to improve their posture and develop faster hand movement. Nunchaku are also a popular weapon in competitions held in places where the weapon is permitted (nunchakus are not currently legal in Norway, Canada, Russia, Poland, Chile, Spain, Germany, and parts of Australia and The United States.)

While nunchakus are most commonly used in Karate, other training systems including Filipino martial arts, Tae Kwon Do, and Hapkido have also employed the weapon, each offering their own take on how the weapon can be used in training and/or competition. Nunchakus are also used in a martial arts-inspired performance art called freestyle nunchaku and in Nunchaku-do, a young nunchaku-oriented martial art represented by the World Nunchaku Association.

Where to Buy Nunchakus Wholesale

AWMA.com offers nunchakus wholesale that are made from natural hardwood, durable foam-covered PVC, all foam, or hollow plastic suitable for any level of martial arts training, tournaments, or demonstrational use. Our competitive versions use top-quality ball bearing swivel systems to ensure higher revolutions per minute.

For nunchakus collectors, we offer 73 different styles, in an assortment of constructions and colors, including the G-Force Illuminator, which shimmers in response to light or movement. For those on the tournament circuit, check out our made-in-the-USA G-Force Swirl Chain Chuck, available in a wide array of colors, and sold in sets of two pairs.

For those who are interested in full-contact sports, we offer the ActionFlex Nunchaku, which provides the sensation of authentic martial arts weaponry.  Or, for younger martial artists, the Children’s Black Practice Foam Nunchakus are available in 9-inch or 11-inch handles, with a smaller 3/4-inch diameter, perfect for little hands.