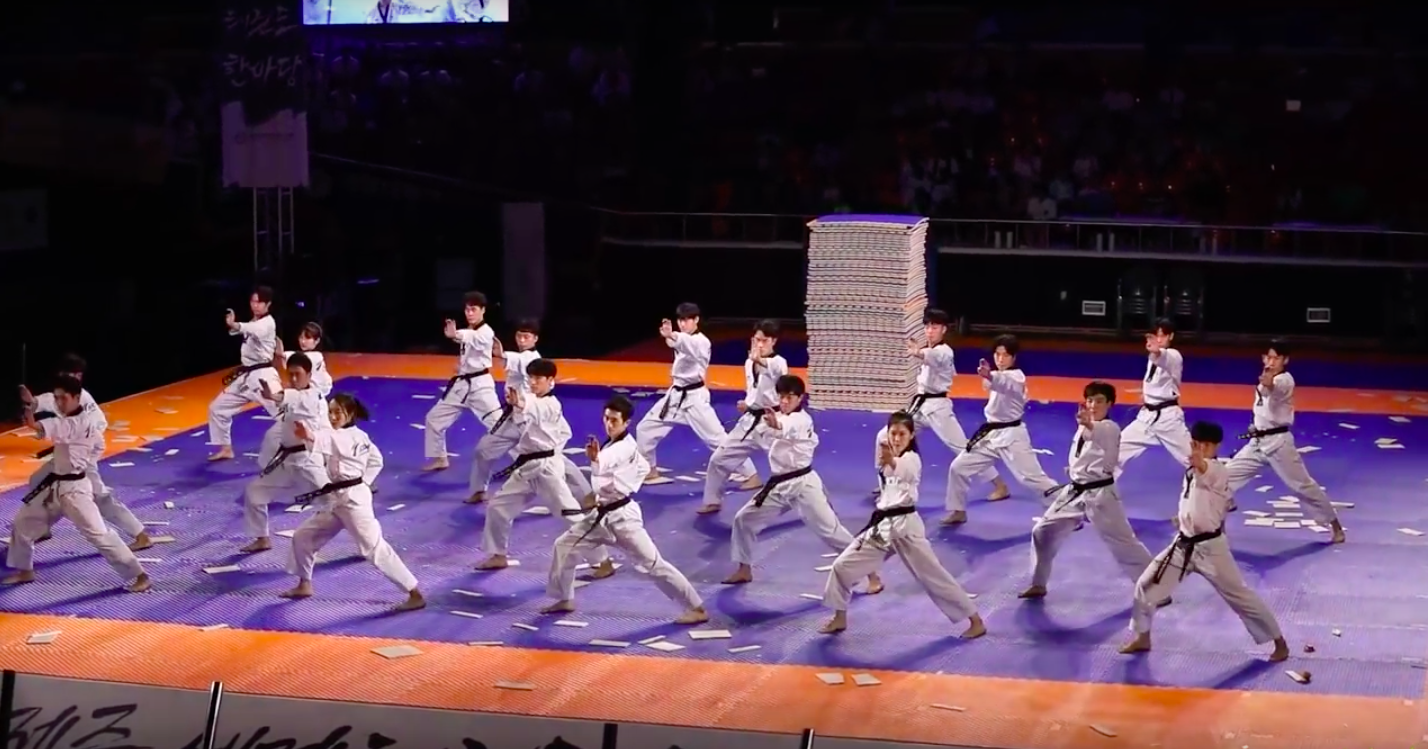 In 1974, a group of high-level Taekwondo practitioners formed a demonstration team with one goal in mind: to “introduce and spread Taekwondo and Korean culture worldwide.”

It’s unlikely that anyone could have imagined the ways in which they’d be able to carry out their mission statement 44 years later.

Last week, a clip of the Kukkiwon Demonstration Team performing at the opening ceremonies of the World Taekwondo Hanmadang caught the eyes and imaginations of people all over the world, and quickly went viral on multiple social media platforms. One clip posted to the Korean DramAmazing Facebook page currently has 37 million views. Another clip posted to Twitter is now at 13.3 million views. The video has also attracted coverage from outlets like Deadspin and The Independent.

If these amazing highlights leave you wanting more, there’s also a full video of the demonstration available on YouTube:

And if that leaves you wanting to know more, here’s what we’ve learned about the Kukkiwon Demonstration Team and the World Taekwondo Hanmadang since we first saw the viral clip last week:

The Kukkiwon Demonstration Team is made up of approximately 70 members of the highest ranked and most skilled Taekwondo practitioners in the world. (In fact, the lowest rank held by any member of this group of masters and students in a 5th degree black belt.) Since forming in 1974, they have traveled to over 100 countries on their demonstration tours, bringing newfound appreciation for and interest in Taekwondo to audiences across the globe.

“As a civil diplomatic corps, the team has been conducting demonstration tours around 10 countries every year in order to introduce and spread Taekwondo and the Korean culture world wide. The demonstrations performed abroad and in welcoming important people visiting Korea are superior diplomatic activities in themselves. Such performances enhance Taekwondo’s global appeal and the value of Korean culture,” the Kukkiwon Demonstration Team’s official website says of their history and vision. “In addition, the team presents a new model of Taekwondo demonstration that sticks to the traditional ways but at the same time adapts to changes whenever necessary. It also contributes to the tourism industry by planning and performing regular demonstrations for international tourists visiting Korea.”

Here’s an example of one of their international demonstrations, from the 2017 Governor’s Cup in Maryland that was hosted by US Taekwondo Academy:

“When we demonstrate Taekwondo overseas, audiences exclaim with admiration and give us thundering applause,” a member of the team told korea.net (via the Internet Archive) in 2012. “We really appreciate worldwide Taekwondo fans and will try our utmost to always give them a better show.”

The World Taekwondo Hanmadang is an annual festival that was founded by the Kukkiwon in 1992 with the goal of uniting martial artists from all over the world and revitalizing Taekwondo. Now recognized as a leading international Taekwondo competition, it remains dedicated to showing Taekwondo’s essentials like breaking, self-defense, and poomsae. Over 5000 people from 60 countries now participate in the festival and compete in various Taekwondo techniques. This year’s edition took place from July 28-31.

“Through the World Taekwondo Hanmadang, participants can enhance the value of Taekwondo as a cultural consciousness, and also act as an instrument through which the superiority of Taekwondo’s culture can be spread globally. In particular, it functions as an international Taekwondo instructional festival for those not well-versed in its practices, and through the tourism programs offered for international Taekwondo practitioners to visit the martial art’s home country and headquarters […]  With over 50 nations and over 5,000 attendees annually, in addition to the actual sparring events, through its display of poomsae, attacks, self defense, and Taekwondo gymnastics, it is making its mark as an international Taekwondo festival that highlights the elegant and sophisticated elements of this ancient martial art.”

While the clip that went viral was for demonstration purposes, there’s also some video of actual competition from the tournament available online.

If you’re interested in seeing this for yourself — or participating — next year, the dates for the 2019 edition of the World Taekwondo Hanmadang have not been announced yet. But you can stay tuned to their official website for all of the latest announcements and details.

What did you think of the viral video? Will you be checking out more from the World Taekwondo Hanmadang? Let us know in the comments

And don’t forget to check out our online store for all of your Taekwondo training and competition needs!

Kukkiwon Demonstration Teamtae kwon doTaekwondoTKDtournamentsWorld Taekwondo Hanmadang
« Previous PostThe Nunchaku: A Brief History Behind This Weapon Next Post »Back To School Training Tips: 5 Ways To Stick To Your Martial Arts and Fitness Routines This Fall