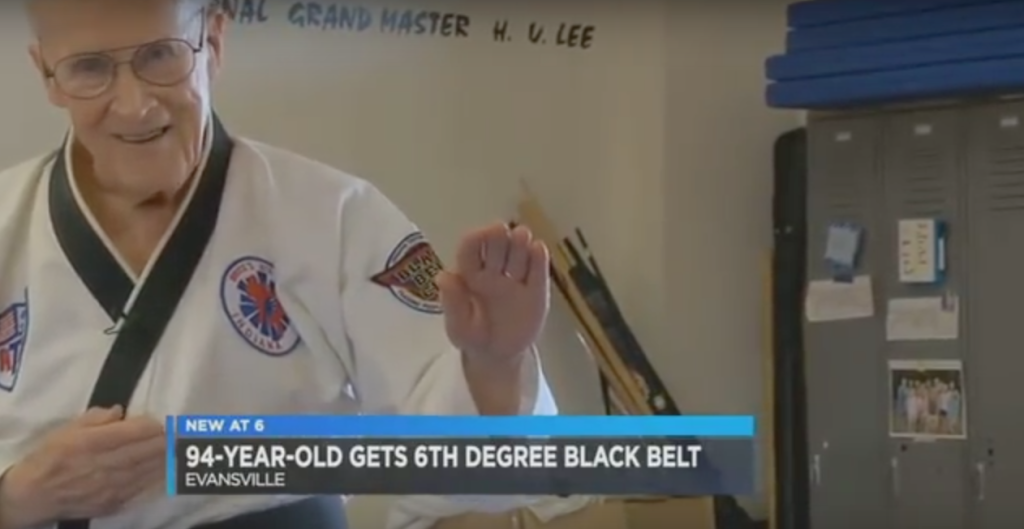 World War II veteran and retired professor Dr. Harlan Van Over made headlines earlier this month when he tested and passed for his sixth degree black belt in Taekwondo at the age of 94.

A late bloomer, at least as far as TKD is concerned, the Indiana native didn’t start training until he was 59 years old. After spending a requisite five years as a fifth degree blackbelt, he first expressed his desire to test for his sixth degree last year. His school’s Grand Master, In Ho Lee, wasn’t convinced at the time, and said that he wanted to see more power in the nonagenarian’s form. But Van Over was not deterred. He’s spent the past year dutifully memorizing and training a pattern of 95 moves and increasing his power.

Last week, all of that hard work and dedication finally paid off. “That’s a real special thing,” he told KATV in Little Rock after the testing. “You have to set goals and you may not achieve them all when you think they should be achieved. If it works out where you have to wait a little longer, that’s just OK.”

The Evansville Courier & Press reports that Van Over is believed to be the oldest person to ever test for and receive a sixth degree black belt, but he’s far from the only senior citizen who is still participating in serious martial arts training. In fact, he’s not even the only older martial artist to receive international attention for their skills in the past week.

A 76 year old Kalaripayattu master from Vadakara, Kerala, India gained viral fame when a video of her sparring with a much younger man was posted on Facebook. The woman, whose name is Meenakshiamma, has been training in the traditional Indian martial art – believed to be one of the oldest in the world – since she was 10 years old, and it shows in her her flexibility, her conditioning and, above all, her skill.

The video soon attracted the attention of prestigious outlets like The New York Times, and earned her the name “martial arts master granny.”

According to a 2010 article by Robert Johnson of The Washington Post, more and more students over the age of 50 are taking up “hard” martial arts like Taekwondo, Karate, Kung Fu judo, and Aikido. “Of course, the kicks of older combatants may not be Bruce Lee-style head shots,” he writes. “And they don’t have to be. Instructors at many of the roughly 30,000 commercial martial arts schools in the U.S. increasingly are tailoring programs to older students, in whom they see potential for an expanded clientele. AARP, the Washington-based advocacy group, says martial arts are becoming more common at community recreation centers, YMCAs, and wellness facilities.”

With people living longer – and often healthier – than ever before, the demand for exciting and fulfilling hobbies and exercise methods has significantly increased, and it’s easy to see why martial arts is so appealing to the young at heart. They help to develop physical and mental fitness, both of which are incredibly important for an aging population. They’re also challenging and fun, making them a welcome alternative to many more traditional seniors’ workout programs.

Martial arts can be a safe and beneficial activity for students of almost all ages, as long as they’re done responsibly. If you’re an older student, training can help to make you feel like a kid again – and has the potential to make you healthier than many of your peers –but it can’t magically give you the resilience, energy, or joints of a 10 or 20 year old. As such, it’s important to keep certain things in mind if you’re looking to extend your combat career well into your retirement years – or if you’re interested in starting a brand new one around that time.

In his Breaking Muscle post “For Older Guys Doing Martial Arts,” coach Andrew Read stresses the importance of proper recovery time for the senior athlete. “You need more rest to recover from your training than your younger classmates. In your head you may think you’re the second coming of Randy Couture, but you’re not. Unless you’ve spent your entire life as a professional athlete before taking up martial arts you are going to suffer,” he writes. “Don’t be fooled into thinking you don’t need more recovery. Ice is your friend, contrast showers may be your best friend, and you most certainly need weekly massage. Massage is absolutely vital for older athletes who are still trying to push hard.”

He also recommends being smart about your time on the mats. “Not all of your training needs to be hard. I know it seems counterintuitive, especially when you start to think that you’ve already given up years of time to all those younger guys around you, but if you start going all out all the time you’re going to quickly wind up hurt. Martial arts is a lifelong journey, not a sprint for the next two months. Display the kind of maturity you’re supposed to have and accept that you are in this for the long haul. Giving up a session this week to make sure you can train the next four is well worth it. That extra session you’re thinking about right now could wind up being twelve you end up missing. It’s hardly worth the cost.”

The amount of rest and responsibility suggested above might be geared toward the 50-plus crowd, but the spirit of that advice actually works well for all ages: Train smart. Take care of your body. Learn how to push your limits in a way that allows you to challenge and improve yourself without risking undue harm. If we all follow that, we just might get to be the next Dr. Harlan Van Overs and Meenakshiammas some day.

Are you an older martial arts student? Or do you plan to become one some day? Let us know about your journey in the comments!