What We Learned From Two New Viral Karate Videos: Don’t Try This at Home 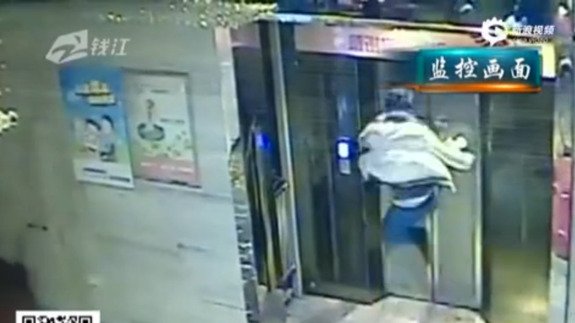 Karate has been having an interesting month on the internet.

In the past two weeks, two separate karate-inspired videos have gone viral, and not because they’re filled with excellent demonstrations of technique, discipline, and skill. In fact, there’s very little of any of those elements present in these videos of loosely martial arts-inspired misadventure.

In the first video, an instructor attempts to kick an apple off the top of a student’s head. Now it’s unclear what this so-called Sensei’s credentials are. There’s very little background information available on the video. It appears to have surfaced with little to no backstory. All we know for certain is that the student appears to be saying some variation of “I’m feeling scared.” But it’s probably safe to assume that he wasn’t a particularly serious or well-schooled master. Spoiler alert: the stunt doesn’t go well.

In the second and more popular of the two videos, a young man karate kicks an elevator door and then falls down the shaft.

According to Yahoo! News, the intoxicated man, a 24-year-old identified only as Yang, had been out carousing at a karaoke bar with his friends earlier in the night in Hangzhou, China, but their fun soon gave way to belligerence. He got into a fight with a friend outside of a KTV lounge, and then he took his frustrations out on the elevator door. The door got its revenge, though and Yang soon fell through it. Luckily, he survived the four-story fall, and was rushed to the hospital where he was treated for a broken leg.

These videos have captured the public’s imagination for the same reason that most videos go viral online: the internet loves a good fail and light dose of schadenfreude. And it can be fun to laugh at these slips, given that no one suffered any long-term serious damage as a result. But they can also serve as a good reminder of how not to behave when you get your first taste of martial arts skills.

All but the most serious of us have probably felt some temptation to show off our newly-acquired skills in the early days of our martial arts training. The writer of this blog post must confess that she once, questionably, demonstrated an anaconda choke at a party while she was a Brazilian Jiu-Jitsu white belt. But part of being a good student is being a responsible human being both on and off the mats and learning when not to break out our training can be a lesson just as important as the moves themselves.

“Why? Because what you learn in martial arts training applies to your everyday life, even if you never have to lift a finger to defend yourself against a man with a bat. If you learn focus and discipline in training, then you can have more success in life. If you keep in shape, you’ll live longer and have fewer health problems. Many aspects of training can contribute to a happy, rewarding daily life. But training in martial arts also comes with responsibilities and obligations in daily life, too. Understanding these responsibilities and taking them seriously is important.”

The first video reminds us of the importance of humility in our lives as martial artists. If this instructor, with whatever credentials he had (and it’s probably safe to assume they weren’t particularly solid ones, given his behavior in the clip) had truly respected the art he was teaching, he would have also appreciated the limits of his skill. He would never have endangered another human being, particularly not a student who trusted him.

Similar guidelines should apply outside of the dojo as well. “You should never boast about your martial arts prowess,” Lawler writes. “Most people won’t care, anyway. Others may take you up on your challenge. And it’s not exactly an expression of humility to tell your buddies at the bar ‘Yeah, I can whup your butt with both arms tied behind my back! Yeah, and blindfolded, too!’ If your buddies have any sense, they’ll dump the beer on your swollen head.”

It’s also important to remember that, outside of competition, any good martial art’s primary purpose is self-defense. You should never risk another person’s safety for the sake of showing off, especially when you might not be as good as you think you are.

Beyond reminding us that alcohol, petulance, and martial arts never mix well, the second video also touches on this self-defense principle. As the famous phrase puts it: “Karate ni sente nashi.” There is no first attack in karate.

This wisdom has more than one application in martial arts. “There are many interpretations of the meaning of karate ni sente nashi,” Andy Pruim writes in the article “Common Karate Sayings” from the February 1990 issue of Black Belt magazine. “One of the most widely accepted notions is that there is no real advantage to the person who makes the first attack; if you are prepared for it, a defensive posture is equally as strong.

“Most people, however, adhere to the most logical interpretation of the phrase: karate is a defensive art and should only be used in this context. Shotokan karate founder Gichin Funakoshi has this maxim written on his headstone in the Zen temple where he is buried. Funakoshi believed karate changed a person’s attitude, injecting awareness, calmness and humility.”

Yang clearly had a enough training to know how to kick the door with a modicum of efficiency – whether he learned that from a class or two or a YouTube video is anyone’s guess – but he used that training unwisely. His actions in the world outside of the dojo showed no humility or discipline. He also showed no real understanding of karate ni sente nashi in any other sense, either, because that door clearly did not attack first.

So when we’re done giggling at the embarrassing misfortune of these terrible martial artists, let’s take a moment to reflect on how we can learn from their mistakes. Not only will it make us better in our practice and in our lives, it can also prevent us from becoming the stars of the next big viral hits.

Do you have any embarrassing martial arts-related stories? Have you ever learned a humbling lesson about using your martial arts unwisely? Let us know in the comments!