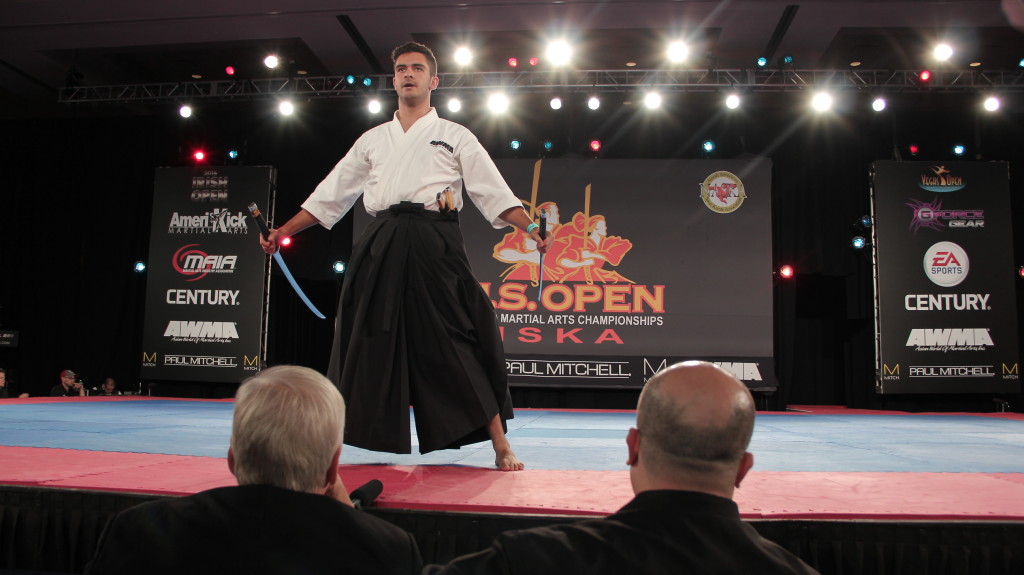 Are you ready to COMPETE? The 29th annual COMPETE International Martial Arts Championship, the first event in the North American Sport Karate Association triple crown, is going down mere days from now, running from February 26 to 28 at the Ontario California Convention Center.

“It’s the biggest sports martial art competition in the west coast, for sure, probably the second largest or third largest in the country,” says Team AWMA member and karate instructor Shahin Jahanvash, whose father Mohamad runs the tournament. “Everybody in Southern California knows that it’s the competition of the year, as well as Northern Californians and people from Nevada and Arizona and the east coast. Everybody travels out here.”

To help martial artists at every belt level get into the competition spirit, we caught up with Shahin Jahanvash to talk about his own journey to black belt, the role that teaching others has played in making him a better competitor, and his advice for young martial artists just starting on the tournament circuit.

We’d usually start an interview like this by asking a competitor when they started taking martial arts and what inspired them to try. But your case is a little different. You were actually born into karate.

I was. My parents already had a karate studio when I was born. I grew up at the karate studio, observing, always seeing people that came in and out of the karate studio. I watched them practice and stuff. I didn’t start taking classes until I was about four years old. After I was four, I started taking classes throughout the week and then quickly started going to tournaments and competing and it all started then.

How old were you when you started competing?

I was actually four when I did my first tournament. I had my Bo Staff, I did a Bo Staff Form and I won first place at my first tournament, So right from the beginning, I was doing pretty well at competitions. My parents knew that I was going to keep doing it.

Do you have any memories of that first tournament, or is that a little too early in your life to recall?

I think it was a little too early. There were a few tournaments from my childhood, before I was 7 or 8-ish, that I remember, but we went to a lot of tournaments. I went a lot with my dad. He was always helping running and coordinating those tournaments. Every time he went to a tournament, I just went with him, did a couple of divisions, and hung out at the karate tournament. We did about 30 to 40 tournaments a year, ever since I was 5, so they all kind of start to blend together a little bit, as well

You tested for your black belt when you were 7 1/2. Is it true that your journey really starts when you reach black belt?

I would say that’s definitely true. I’ve been a black belt for more of my life than not. And, like I said, before that point, it’s all kind of a blur. I was going to karate tournaments and learning stuff here and there ,but I’ve done so much more learning since making my black belt than before I made my black belt. So yeah, the journey definitely begins there.

When did you start teaching?

I started teaching a little bit here and there when I was about 11 or 12. I would be assisting classes with my dad and some of the older instructors. I didn’t start fully teaching my own classes until I was14 or 15 years old. And even then, as a junior, I still had some of the adult instructors in class watching and observing, making sure I wasn’t messing up or anything like that. I have always loved helping out, teaching other kids stuff that I learned. Some of the older students didn’t really like learning some stuff from a 12 year old. It took a little time before I earned their respect.

You’re also a full time student in Broadcast Television right now. How do you balance school work, instruction, and your own competition training?

When it comes to training myself, that always… not comes second, but it comes in later in the day. I go to school in the morning, and then after about 2:30pm, I head to to the studio, get ready for the day, cleaning up and stuff like that. Then I’ll teach from 4 to 8pm and then usually after 8 is when I’ll start working out myself, going through my routines, my Forms, my Katas and stuff when no one else is at the dojo. That’s the best time for me to do it. And I also like to go to the gym every day, so I do stay in shape. So even the days that I don’t really get to practice my karate for myself, I’m doing some other form of exercises.

But I do feel that teaching is a big part of my training, as well. Transmitting the knowledge and teaching little stances here and there, and showing students how to go from one stance to another. Every single I time I reteach that stuff, it’s like refining my training myself. So I get to practice the basics, and all the advanced stuff is is a lot of basics put together. By going through the basics over and over and over, it helps reenforce all of the stuff that I do in my own routine.

Do you have any advice for young martial artists who are just starting to compete or consider competition?

The biggest thing that you’ve got to remember when you’re starting out in the sport martial arts world is to never give up. I started doing the NASKA circuit right after I made my black belt, when I was 7 1/2, in 2003 and I’ve been competing on it ever since.

I took a one year break because I was a middle schooler and didn’t know if karate was what I wanted to do. So my dad let me take like half of a year off, and during that half of a year, I kind of realized that I really missed karate. It is a lot of hard work. It’s a pain in the butt sometimes, leaving on the weekends, leaving your friends at home to go to karate tournaments and stuff. I always felt like I was missing out on things at home, but I didn’t realize how much of a blessing it was to go to these tournaments and how much it was benefitting me.

So one thing I would say to young martial artists is don’t give up. That’s the main thing. It might be hard. You might win second place a lot, but the people that are winning first places were winning second places before. So it’s not easy. It’s definitely not an easy circuit. But competition is what makes you grow.

Check out Shahin in action at the Diamond Nationals Finals last year: