The Levels of Karate Belts

We took a look at the history and symbolism of karate belts in the blog post The Meaning Of Karate Belts, and we all know that most martial arts use some kind of color-coded ranking system to represent class advancement and reward the hard work and discipline that a student has put into mastering their art. But what does each step of the color-coded journey toward advanced levels — namely the coveted black belt — signify?

While many schools have their own unique spin on exactly what each color (or kyu) represents in terms of both technical skill and philosophical growth — and some might have slight variations in the order of their belts — most generally follow this path. Let’s break down what each element of colored belt ranking means to a karateka beginning their training journey, color by color.

In both English and Japanese cultures, white is the color of purity and innocence, and a white belt represents the very beginning or the birth of the martial arts process. Like a seed covered by a blanket of snow in the winter, the new karate student is ready and waiting to start growing. The brand new student does not yet know how to control their minds or bodies, but white as a karate belt color symbolizes both their clean slate and their willingness to learn. A practical purpose of the white belt is to hold the gi together and teach the karate student how to properly tie and wear a belt.

Average time before advancement is 6-9 months

The yellow color is generally understood to be representative of the sun, which means that the blanket of white snow has melted, and the fresh spring ground beneath is now basking in its first transformative rays of sunshine. A yellow karate belt is awarded when a new student has demonstrated that they are opening their minds to the practice of karate and to their sensei’s teachings.

With the yellow belt, the student is expected to study and develop fundamental karate skills as well as unlearn any ideas they had previously developed regarding fighting.

Average time before advancement is 7-9 months

As the sun’s rays intensify, they switch from a yellow glow to a bright orange one. Therefore, the orange karate belt represents the student who has further opened their minds to karate’s teachings and is beginning to benefit from that more brilliant light. Along with continuing to develop better senses of coordination, balance, and patience, this karate belt color is awarded to the student who is starting to gain a sound grasp of karate’s basic and fundamental skills. Students are required to demonstrate progress in learning more about their bodies.

Average time before advancement is 9-10 months.

Once the orange belt begins to refine the basic skills they’ve learned so far, they can graduate to a green karate belt. The very basic steps of their journey are complete, and they can begin to work toward the intermediate belts. The green color is representative of the seedling itself as it starts to break through the ground and grow.

Average time before advancement is 10-12 months. 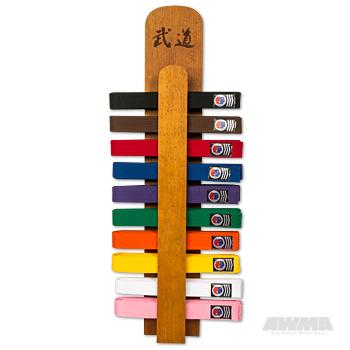 Just like a plant reaching up toward the sky as it grows stronger, the green belt builds upon the lessons and techniques that they have already been taught and continues to strive for more knowledge, skill, and ability to control their mind and body in the ways of the art. The blue belt represents the growth toward that sky as the student is fed more and more difficult techniques in order to nurture their growth.

At the blue belt level, students can expect to work on their upper bodies, focusing on strength, balance, coordination, and flexibility. Aside from various stances, strikes, defenses, kicks, and kata, Kumite — friendly fighting or sparring — is required upon examination.

As the student reaches the end of their time at the blue belt level, they begin to develop a deeper appreciation of what a black belt means. The graduation to a purple karate belt represents a moment of dramatic transition for the karateka as they begin to grow into the more advanced levels of their training, just like the purple color that the sky takes on as it begins to emerge into dawn.

Just like the ripening seed that is ready for harvest, the brown belt is a student who is ready to mature into the higher ranks. Like a plant that will be cultivated for the next step in its life cycle, the brown belt will begin to reap the benefits of all of their hard work from their first steps as a white belt to this current stage in their journey.

Average time before advancement is 12-20 months

The color of a spectacular sunset, a red belt symbolizes a student’s intense dedication as they work toward mastery of their art, as they gain more detailed knowledge and learn increasing control and discipline in their physical skill. As red can also signify danger, a red karate belt can also be read as an acknowledgement of the fact that a student is becoming more dangerous thanks to their skills (which, of course, must be balanced with their newfound self-control).

In many ways, the black karate belt symbolizes the end. The darkness that exists after a sun has set and a plant has been harvested. The student who has completed their transformation from unknowing and unskilled white belt into a mature and wise black belt. As with any journey, though, the end is only the beginning of something new.

As many karatekas will tell you, your martial arts evolution truly begins when you earn your black belt. While it does signify your mastery of karate fundamentals, it also, more importantly, represents that you are ready to share what you’ve learned with others and continue to grow and seek both skill and enlightenment from your training.

Frequently Asked Questions About the Different Belts in Karate

What do the stripes on karate belts represent?

If you’re wondering what the different belts on karate mean, your mind may immediately associate the ranks with solid colors. However, the levels of karate belts aren’t exclusive to different shades; you may have seen various color karate belts with a stripe — or even multiple stripes — on them. Like many aspects of martial arts training and gear, these aren’t just for show; they’re steeped in tradition. Stripes on belts indicate progress at a particular belt level.

A newly promoted green belt won’t have any stripes donning their belt. However, a green belt with, say, six months of training could have two stripes on their belt. These marks indicate a practitioner’s progress as it relates to belt color. Intermediate-level students must attend more classes to earn their stripes than beginner-level belts.

Is black belt the highest rank?

The black belt is generally accepted as the highest-ranked belt. However, for some martial arts, other colors have been placed above the black belt when one attains a high grade.

In Japanese martial arts, the further subdivisions of black belt ranks can be linked to dan ranks, or grades, indicated by stripes on the belt. Yūdansha — a Japanese word that roughly translates to “person who holds a dan grade” — is typically used to describe those who hold a black belt rank. The belt remains black, although stripes or other insignia may be added to signify seniority.

In judo and certain forms of karate, a sixth dan will wear a red and white belt, often reserved for ceremonial occasions. At 9th or 10th dan, some schools award red. In some jujutsu schools, the Shihan rank and higher have purple belts. These colors are often still collectively referred to as “black belts.”

What’s the historical context of the different colored belts in karate?

If you’re wondering what the different belts of karate are, you may have some questions as to where it all began. One school of thought — more a myth than anything — says the level of karate belts came from an ancient tradition of martial arts students never washing their belts. Beginning students were provided white belts, and as they studied, practiced, and developed their skills, those white belts became soiled and stained with sweat, blood, and dirt. Once the belts yellowed, darkened, and eventually became black, the students were said to be masters.

In reality, martial arts belts were simply utilized to hold up students’ pants, and the level of karate belts — the renowned karate belt colors — did not evolve until the late 19th century. Jigoro Kano, the founder of judo, introduced the concept in Japan. By the early 20th century, the idea had spread like wildfire, with many martial artists and schools adopting the system. Today, most forms of martial arts practice involve some form of colored belt ranking to track progress.

For more information about the belt system or any of our products, including karate and martial arts belt displays, reach out to us today!