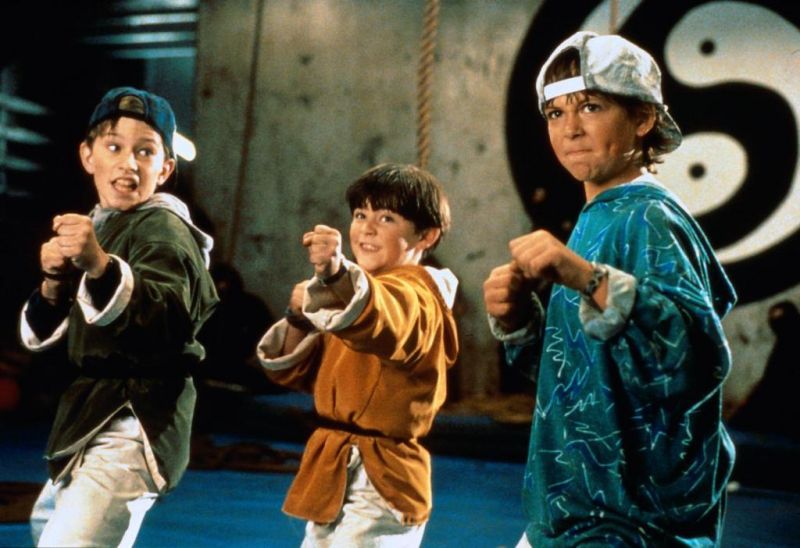 With their themes of honor, tradition, hard work, and dedication, martial arts films can be a great way to inspire and entertain the young student. What better way to enhance your training than to watch a thrilling story where the protagonist is learning all of the same lessons that you learn on the mat or in the ring?

Depending on the violence involved in the action and the maturity of the themes in some of these moves, though, not every martial arts flick is appropriate for every martial artist. For every Karate Kid, which has something for students of all ages, there’s an Ong Bak or an Ip Man that might require a few more years of life experience to be appreciated properly.

With The Lego Ninjago Movie about to hit theaters, we’ve been thinking a lot about ninja films, particularly ninja films that you can share with the little ninjas. Enter the Ninja – and pretty much every ninja film that Cannon Films produced during their B-movie reign – can make for some good grownup fun. Classics like Duel to the Death and The Five Element Ninjas are also probably best saved until your young martial artists have grown up a little more. So where should you turn if your baby or teen ninja is excited about The Lego Ninjago Movie and wants some similarly age-appropriate fare to watch? Here’s five family-friendly films that might be worth a shot:

If you’re at all interested in ninjas in pop culture, we probably don’t have to tell you too much about the popular and beloved comic/ TV show/ movie/ video game franchise about the four adolescent turtles and their rat mentor who became ninjutsu-practicing super heroes after an incident with some mysterious “ooze.” Chances are that you’re already a fan of Leonardo, Michaelangelo, Donatello, Raphael, and Splinter, and are well-versed in their ongoing battles against Shredder and The Foot Clan in both the first film series, the recent rebooted movies, and the animated pictures. If you’re looking to revisit TMNT, though, or introduce them to the next generation of ninja enthusiasts, you can’t go wrong with the original 1990 live action film from the franchise. This origin story that sets up the longstanding feud between Splinter and Shredder and unites the Turtles with their pals April and Casey is a must-see for anyone who likes to have a bit fun with their ninja flicks. And, thanks to the 90s dance revival, the film’s soundtrack (with songs like “TURTLE Power”) is sounding better than ever, too.

The 3 Ninjas franchise became a classic case of diminishing returns as they started to make increasingly silly sequels for the rest of the decade, but the movie that started it all is still a nice dose of ninja fun. The story of three brothers who spend their summers training with their grandfather, who happens to be a ninjutsu master, and who must use their skills to thwart a kidnapping plot that even the FBI can’t handle, has held up surprisingly well in the quarter century since it was first released. The only real problem with watching the movie now is that trying to explain 1992 to kids who weren’t even born yet is going to make you feel a little old if you happened to love this movie when it first came out.

Now we’re not saying that this choice from 1993 is high art. This film about brothers who are banished from their home country and grow up happily surfing in California until a team of ninja assassins comes hunting for them, leading them to return to their country in an effort to save it, is clearly a kids comedy of the zany ’90s variety. The gnarly trailer appears gives away almost the entire plot, which is clearly an attempt to mix Teenage Mutant Ninja Turtles with 3 Ninjas. And it has Rob Schneider in it, which was always a sign that things were going to get silly in movies like this back in the day. But if the clever, self-aware wackiness of Lego Ninjago appeals to you, the somewhat more earnest (and maybe somewhat unintentionally ridiculous) comedy of Surf Ninjas might just appeal to you in its own way, too.

Speaking of goofy, if your young ninja is too old for the slapstick silliness of Surf Ninjas, but not quite ready for the adult humor (and everything else) of Cannon’s Ninja series, this off-the-wall comedy starring Chris Farley in his last major role before his untimely death in 1997 might be just the perfect middle ground. The story of a young western boy who is taken in by a clan of ninjas as a baby and returns to California as an adult to help solve a murder mystery with the help of the (not so great) ninja skills that he tried to pick up from his adopted family isn’t art, but it’s not trying to be. This fish out of water comedy is an unabashedly ridiculous romp through the hero genre that never takes itself seriously, but manages to pay some respects to the martial arts and the martial arts movies that inspired it.

While the themes probably won’t interest the child and tween set and the action is a little too intense for those age groups, 2005’s Shinobi: Heart Under Blade could be perfect for the adolescent ninja in your life. This sweeping epic about two young lovers who come from warring ninja clans has a tragically beautiful classic drama at its heart and some truly imaginative and innovative fight sequences along the way. If your teen happens to be studying Romeo and Juliet in school, this ninja-fueled take on the star-crossed lovers story could be the perfect blend between the classroom and the dojo.

Are you a fan of any of these movies? Do you have a favorite family-friendly ninja film? Let us know in the comments!

And check out our online store. We’ve got everything a growing ninja needs.