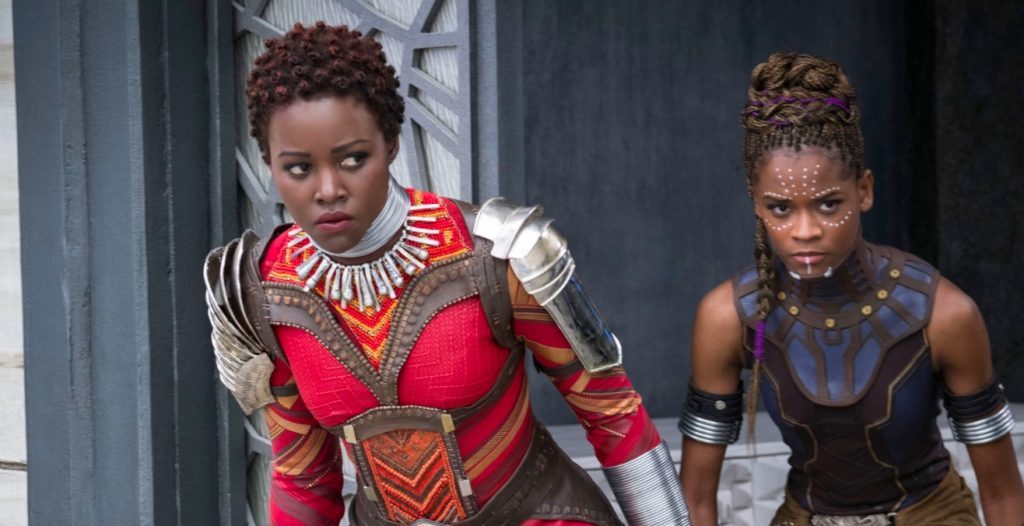 After years of anticipation, months upon months of speculation and teasers, and multiple AWMA blog posts on the topic, Black Panther is finally here. The latest — and, quite possibly, best — feature-length offering from the Marvel universe enjoyed its world premiere late last month and opens in theaters across the globe on February 16.

We’ve looked at a number of different aspects of the film’s strong martial arts influence in previous stories on Black Panther. We’ve debated what we might be able to expect from T’Challa’s fighting style based on his appearance in Captain America: Civil War. We’ve looked at the extensive training, research, and thought that star Chadwick Boseman put into the physical aspect of his performance. We’ve explored Michael B. Jordan’s ongoing commitment to training for performances in his previous roles in films like Creed. And we’ve written about actress and playwright Danai Gurira and what her dedication to mastering the blade as well as she’s mastered the stage and screen might mean for her role in the film. But there’s another studious martial artist in the movie’s incredibly star-studded cast that we’ve been sleeping on: Lupita Nyong’o.

To celebrate the release of Black Panther, let’s take a closer look at the serious physical and mental preparation that the Oscar-winning actress put into playing an intense, “lone wolf” spy named Nakia.

Although this is the first time we’ll be able to see Nyong’o’s martial arts skills on screen, she’s far from a rookie when it comes to training. “I have dabbled in martial arts all my life, since I was 7, maybe — tae kwon do, capoeira, Muay Thai,” the star recently told The Hollywood Reporter. “It’s always been an interest because in martial arts there is a mind/body relationship. You can’t do it right if you’re angry; how you can exert your power with a clear mind really interests me.”

Her Panther-specific training began six weeks before shooting started in January, 2017. “It started off four hours a day, then it was reduced to two when I started bulking up — I remember coming home for Christmas and I couldn’t fit into my clothes,” she recalls. “We would have warm-ups together, then break off and do our individual techniques.”

Nakia, as the character makes clear in the film, does not have the same training as Black Panther’s personal bodyguards, the Dora Milaje. So Nyong’o’s training branched off into street fighting, jiu-jitsu, capoeira, and weapons-based techniques. ““My character fights with anything: guns, spears, ring blades, shoes, glass,” she told Vogue.

“It is intense,” Nyong’o admitted to Collider while on set for Black Panther last year.  “I mean I had dreams of being in an action film and stuff. I didn’t realize that it was going to change my diet! And require me to wake up at insane hours. This week alone, I woke up to workout at 3 in the morning, which is ridiculous. So it does take a lot of physical endurance and a commitment to your body, like nothing else. But it’s been so much fun to challenge my body in this new way. Nakia’s fighting style is being informed by judo and ju-jitsu and silat, and Filipino martial arts and stuff like that. So I’m learning all these cool skills and I get to jump higher than I thought I could jump. I get to roll backwards, which I thought I would never do after the age of 8? So it’s been fun.”

As much fun as she had, though, Nyong’o, who did the bulk of her own stunts for the film, also ran into some trouble along the way. Ever the game professional, she took it stride. “I was fighting some bad guys, and it involved doing this scissor move. So I jumped up, and my legs went out and grabbed his waist, but I ended up spraining my MCL [medial collateral ligament]. I had to wear a brace for two weeks,” she told the Hollywood Reporter. “Luckily, the next fight scene I had was two weeks later. I got hurt on schedule.”

For Nyong’o, the role wasn’t just a fun physical and mental challenge, though. It was also a chance to be a hero to the next generation of Lupita Nyong’os out there. “We were creating an aspirational world where an African people are in charge of their own destiny,” she says of Black Panther. “And that really appealed to me and had the little girl inside me jumping for joy. To just have African people, black people, at the center of that narrative is so exciting.”

Are you excited about Black Panther and Lupita Nyong’o’s performance? What do you think of the Wakandan martial arts skills we’ve seen in the previews so far? Let us know in the comments!

And check out our online store. We might not have Nakia’s ring blades in stock, but we’ve got all of your other martial arts supplies covered.