KOBUDO – The Art of Okinawan Weaponry

When I was a kid I remember watching Enter the Dragon and being blown away. I think many people were.

For many westerners it was a no-holds-barred introduction to the martial arts. The entire mystique of the film, its allure…it was intoxicating.

Many of us had never seen anybody move that way. The techniques seemed like the moves of a comic book superhero.

One element of the film I remember most vividly was Bruce’s use of weapons.

He uses a staff. Who can forget that moment in which he swipes the staff through, hitting three opponents with the same strike. That was not only cool but also revealed Bruce’s talent for great martial arts choreography.

He also uses the Filipino double sticks. There’s a moment in which he hits a guy maybe 20 times. 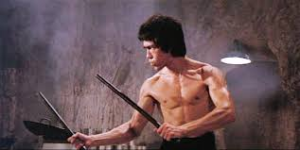 And of course, my favorite, the nunchaku. 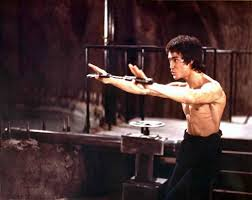 When I first saw the scene I didn’t even know the weapon existed, let alone seen it used that way. Many people fell in love with the weapon right then and there.

Little did we know that it wasnt’ really a Kung Fu weapon, but rather a traditional Kobudo weapon.

Kobudo being the martial art of traditional Okinawan weapons.

You have to give it to Bruce. Using weapons from different martial arts was not only a stroke of genius but also revealed his progressive thinking.

I first found out about Kobudo while studying Karate. The Okinawan people, after being conquered by the Samurai, developed a method of fighting using their farming implements. 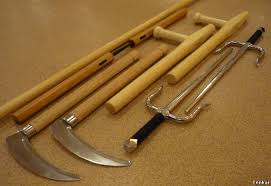 This actually has no basis in history and experts have subsequently dismissed the theory because of lack of evidence.

Many of the weapons have Chinese antecedents or are clear adaptations from other South East Asian counterparts.

Traditional Kobudo weapons include the “bo” or staff. 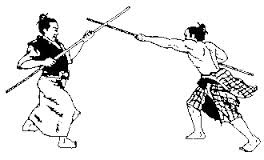 The “sai,” one of my favorites – used in pairs, they were traditionally blunt so you can imagine how painful it would have been to be stabbed with one. The forklike extensions on each side served to trap other weapons such as the sword and even break them 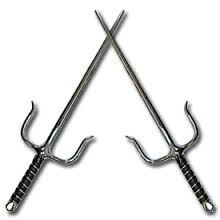 The “tonfa” was another traditional Kobudo weapon – modernized today to serve as police batons.

The “tonfa” could also be used in pairs and could be held by grasping the handle of the shaft.

The “kama,” a rather scary looking weapon reminiscent of a sickle. 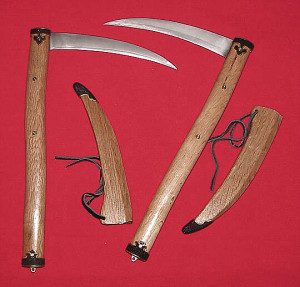 And then, of course, the one Kobudo weapon that everyone knows – the “nunchaku.” Traditionally made out of redwood and rope.

I keep thinking of that scene in the documentary “Budo” where the nunchaku expert knocks cigarettes off of his partner’s mouth with the chucks. That’s a sure way of losing a tooth if you don’t know what you’re doing.

Kobudo also has other lesser known weapons like the spear and shield, the brass knuckles, staffs of different shapes and sizes, even something called the Okinawan Oar. 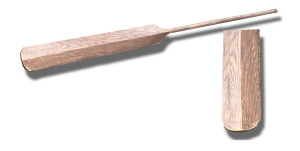 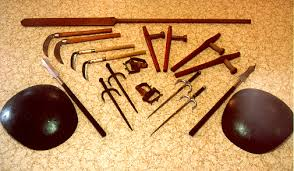 Their forms are usually very direct and practical. None of the flipping and tossing of the weapon that we see in modern forms. That may look good but in a real fight it would just serve to increase the possibility of losing the weapon. In a real struggle that would mean death.

Of course it doesn’t prevent us from enjoying it when it’s done.

Here’s an example of a modern dorm.

My favorite scene using weapons is the moment in Enter the Dragon when Bruce takes the chucks from a foolish looking adversary and then proceeds to give him a lesson on how to wield them. The guy then decides to grab a stick from the floor and attack.

Any normal human being would have just ran away.

Bruce, of course, bashes his brains in for good measure – a fitting end to such disregard for common sense.