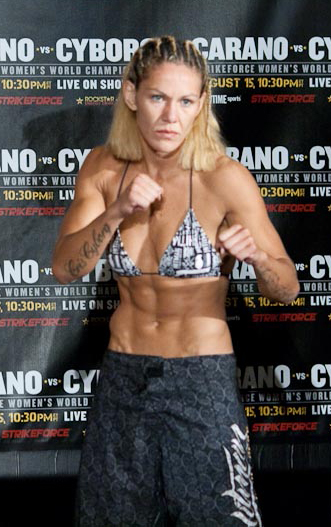 In one of the most anticipated “surprise” announcements in sports in the past decade, Cristiane “Cyborg” Justino is finally coming to the UFC.

The imposing and polarizing women’s mixed martial art trailblazer, who has racked up an impressive 15-1-1 record (with 13 of those wins coming via knockout) and a somewhat less admirable year-long suspension for the use of a banned substance in 2012 in her 11 year MMA career has been under contract with the UFC’s parent company, Zuffa, for just over a year now. And speculation surrounding her leap to the most prominent promotion in the sport has existed since the UFC introduced its first women’s division in February 2013. But it wasn’t until earlier this week that the veteran fighter finally got the fight that she – and the rest of the MMA world – has been waiting for.

On March 28, the UFC announced that Justino will face Leslie Smith at UFC 198 at the Arena da Baixada in Cyborg’s hometown of Curitiba, Brazil. The fight will be held at a catchweight of 140 pounds. 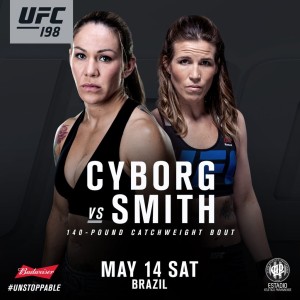 It should be quite the homecoming for Cyborg, who began competing professionally on a series of cards in Brazil over a decade ago. She lost in her debut, tapping to a kneebar less than two minutes into the first round at SF Showfight 2 in Sao Paulo on May 17, 2005, but has been unstoppable against everyone and everything except her own poor choice ever since.

On July 26, 2008, she made her stateside debut, scoring a TKO over WMMA pioneer (and future member of Ronda Rousey’s Four Horsewomen) Shayna Baszler at Elite XC, Unfinished Business. Two more wins and a year later, she earned a shot at the biggest name in WMMA with a headlining match against Gina Carano on Strikeforce’s August 15, 2009 card. She went on to hand Carano her only loss with a TKO victory at the 4:59 mark of the first round, effectively ending Carano’s combat career (the actress/fighter sometimes teases a return to the sport, but hasn’t fought since) and becoming the first Strikeforce Women’s Featherweight Champion in the process.

Cyborg defended her belt with TKO victories over Marloes Coenen and Jan Finney. She also knocked out challenger Hiroko Yamanaka 16 seconds into their December 17, 2011 bout, but that win was changed to a “No Decision” by the California Athletic State Commission when Justino tested positive for anabolic steroids. She was stripped of her belt, fined $2500, and suspended for a year.

Having served her time away from competition, Justino signed with the up and coming women’s promotion, Invicta FC, in February 2013 and began working toward her redemption with a first round TKO victory over Fiona Muxlow in a title eliminator match for the soon to be introduced Invicta FC Featherweight Championship at Invicta FC 5. She went on to win that belt with a second victory over Marloes Coenen at Invicta FC 6 on July 13, 2013.

Cyborg has remained clean on all drug tests and undefeated ever since. Despite having her detractors, including, at various points, former UFC Women’s Bantamweight Champ Ronda Rousey and UFC head honcho Dana White himself, the mythology around her only grew as she continued to tear through her (admittedly shallow) division in Invicta.

At the height of Rousey’s reign, she was considered by many to be the only possible challenge to the seemingly unstoppable star, but there were some major factors standing in the way of a clash between MMA’s most dominant women. In addition to Rousey’s vocal and vicious distaste for Cyborg for her past steroid use,  there was also the question of size. Justino fought a whole weight class above Rowdy and Rousey was unwilling to fight up or meet at a catchweight while Cyborg struggled to try to drop down. Then the issue was rendered moot when Holly Holm proved that other giants of women’s combat sport were equally capable of toppling the sport’s biggest crossover star with a second round knockout at UFC 193.

After indulging in a little public schadenfreude on Twitter, Cyborg got back to work knocking out out any and all challengers to her belt in Invicta, and the rest of the world went back to wondering what would happen with her contract with Zuffa. Joe Rogan has been promoting the idea of a full UFC Women’s Featherweight division anchored by Cyborg since her signing with the promotion’s parent company last summer, but White and company seem reluctant to add another women’s division right now.

This catchweight bout against fellow Invicta alumna Smith is a good compromise and first step, but it will be interesting to see where the UFC and Cyborg go from here. Invicta head Shannon Knapp has said that Justino could continue to defend her title, but where will she go next in the UFC? Will she continue to fight catchweight belts against game opponents, like new Bantamweight Champ Miesha Tate who recently said that she would be open to that matchup? Will she try to make the 135lb weight limit for the lower division again, despite the threats it poses to her health and power as a fighter? And can she ever truly redeem herself in the eyes of martial arts lovers, who are even less willing to forgive a one-time cheater than the average sports fan?

Of course, all of these questions presuppose that Cyborg will definitively defeat her first UFC opponent, which is an unfair assumption to make, given that Smith is a legitimately tough competitor in her own right and, according to Dana White, “begged” for this matchup. She might be a massive underdog, but the UFC hasn’t exactly been lacking in “shocking” underdog victories lately.

Are you excited to see Cyborg fight in the UFC? Let us know in the comments!