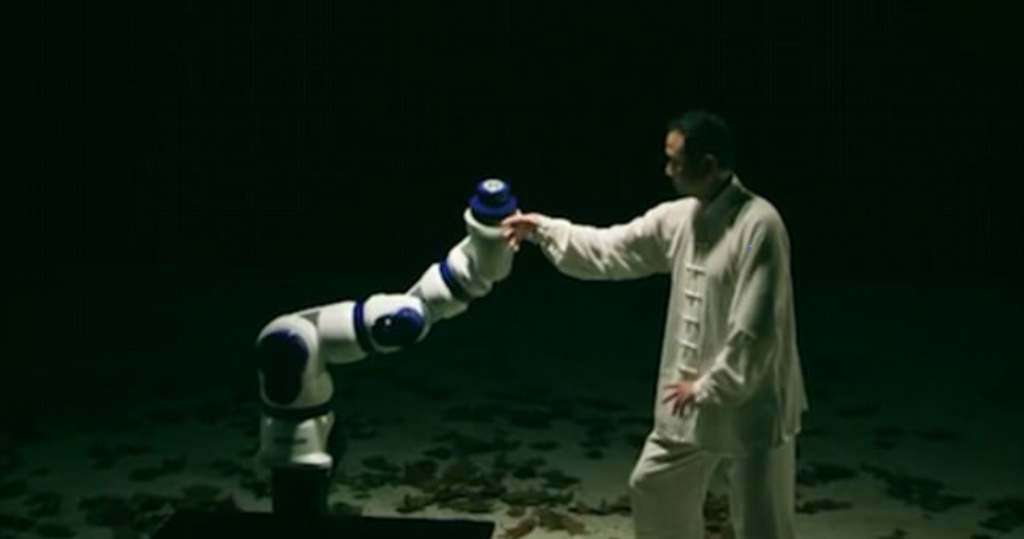 Robot technology has come a long way in the new millennium. Robots are becoming capable of performing more and more complex tasks. They’re becoming more intelligent. They can communicate with each other. And now they can also perform martial arts.

In a brand new ad for Siasun, a Tai Chi master puts two of the Chinese industrial robot manufacturing company’s models through a series of Tai Chi moves and the results are intriguing:

Martial artists don’t need to worry, though. Robots aren’t coming for our jobs just yet. According to The Daily Mail, these models are actually intended for use in small factories and were taught Tai Chi as a way to demonstrate their dexterity and agility. They are, however, part of a growing group of robots who have been taught – or are teaching themselves! – martial arts for a mix of entertainment and practical purposes. Let’s look at some the ways in which tai chi, karate, judo, and other disciplines have helped to improve the robotic universe.

Siasun aren’t the first to attempt to introduce Tai Chi to robots. Faced with the challenge of making their movements more effective, roboticist Oussama Khatib at the Stanford Artificial Intelligence Laboratory in California and his team began to research various human movements in 2007. One of the people that they decided to study was an expert in the gentle art of movement. “The tai chi master helps provide data on motions that are closer to optimal in performance for comparison,” Khatib told Live Science. This study suggested that teaching robots movements like Tai Chi could help them function alongside human beings in a far more graceful and less clumsy way. “Using this data, the scientists devised computer models that showed how people minimize effort. These allow robots to perform tasks without computing where exactly it will go in advance as conventional methods do, saving on the number of computations the robots have to carry out,” Live Science reported.

In the early part of this century, The Institute for Human Learning and Machine Cognition were hard at work teaching their human-sized robot Atlas how to become The Karate Kid. They started with the crane kick in an effort to demonstrate the 6’2” and 330 pound robot’s movement abilities and balance skills. As of 2003, Atlas had the stance down (as Extreme Tech points out, the cable above the robot is a power source and doesn’t help stabilize Atlas at all), but had yet to make the move to the kick itself.

Around the same time, CEATEC 2003 (Combined Exhibition of Advanced Technologies) in Tokyo featured smaller, more agile robots who had mastered some basic karate and sumo techniques. Including kicking.

If you’ve ever trained in a martial art, chances are that one of your very first lessons involved learning how to fall properly. That’s because being able to land as safely and smartly as possible is a fundamental skill in any combat sport. As it turns out, robots need this same kind of injury prevention in their physical skill set as well. This is why the Georgia Institute of Technology in Atlanta developed an algorithm that included judo techniques so that robots could learn to fall without breaking – or even exploding. As the research paper on the subject explained it in 2015: “The robot will discover an appropriate contact sequence online to minimize the damage of the fall. Our algorithm reacts to a wide range of initial perturbations by automatically determining the total number of contacts, the order of contacts, and the position and timing of contacts. The sequence of contact is optimized such that the initial momentum is dissipated with minimal damage on the robot.”

Robots aren’t just taking from the martial arts world, though. Some are also giving back. Take the Taekwondo Personal Trainer, for instance. In 2016, two Italian roboticists filed a patent for this kickable robot personal trainer with the aim of eliminating human error or bias from physical instruction. “When a personal trainer teaches a martial art, he transfers postures to the athlete which can be voluntary or involuntary, good or bad, static or dynamic,” Giovanni Muscolo, a roboticist and a martial artist with TKD and Kung Fu training, told Popular Science that year. “Using a robot, the personal trainer can give to his athlete only good inputs, avoiding the transmission of errors.”

“TPT has no posture, or legs. The wheeled robot can be remotely operated, and has tactile sensors to count the number and speed of kicks and punches it receives on pads located in the same areas on the human body that would be valid targets during taekwondo competitions,” Popular Science’s Sarah Fecht observed. “TPT also gives acoustic feedback as well as visual feedback via LED-lit eyes. Being armless, the robot can’t attempt to block hits the way a human could, but TPT could still prove to be a useful training tool.”

What do you think of the robots’ martial arts skills? Would you train with a robot instructor? Let us know in the comments!

And check out our online store. We might not have a robot sensei for sale (yet?) but we’ve got all of your other martial arts training needs covered.