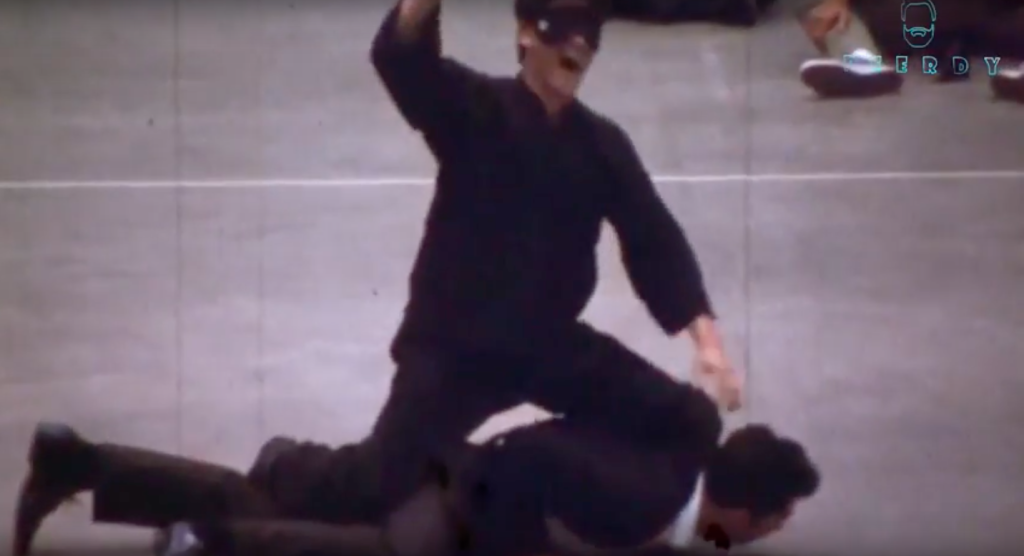 In our last post, we mentioned that we’re all big Bruce Lee fans at the AWMA blog and that we like to keep up to date on all of the latest news involving the late martial arts legend and his ongoing legacy. No sooner had we published that post than two big new Lee-related stories hit the internet. And they’re both really exciting. So, without further ado, let’s jump into both of these amazing developments in the Bruce Lee universe.

In the past few days, a YouTube account called Beerdy- Bruce Lee Central posted a new and possibly never before seen clip of the master in actual combat.  “This is the only recording of Bruce Lee in a real MMA fight,” the video’s description reads. “He’s fighting Ted Wong here, one of his top students. They are wearing protective gear because they were NOT ALLOWED to fight without them. Those were the state rules at the time. If not for those rules I can guarantee you that Bruce would have fought bare-knuckled. Footage is restored to 4K resolution. Enjoy.”

The original video has since been pulled from YouTube over copyright claims, but a copy is still available here:

Wong was a good friend of Lee’s, one of his first students, and a first-hand witness to some of the most pivotal moments in his development as a martial artist. Wong had been interested in martial arts as a child, but had long since moved onto boxing when he first encountered Lee at a seminar in 1967. Seeing the man in action was enough to revive his childhood fascination, and Wong started taking lessons with him almost immediately. “When I started training at the Chinatown school, I had no prior experience in martial arts,” Wong said in an interview with Black Belt Magazine. “Bruce Lee saw that I was short on skill and knowledge, but I think he recognized that I had heart, that I was dedicated and hardworking. He felt sorry for me because I was the guy that had little knowledge and skill compared to the rest of the group — some of them were black belts and boxing champions. Also, he found that I came from Hong Kong, and we spoke the same language. That’s another reason we became good friends.”

YouTube user The Modern Martial Artist was so excited about the footage that they put together a breakdown of some of Lee’s moves.

“So what really strikes me about this match is Lee’s speed, reaction time, and economy of motion. It’s very apparent that he had the physical attributes to make him a great fighter, and the mental ones as well. The one thing we really don’t know is how much of a chin Lee had, as he never really gets hit in these sessions,” The Modern Martial Artist writes in the video’s description.

TMMA then goes on to question the reports that it’s Wong in the footage. “It’s also in question exactly who Lee was fighting, some saying his students, and some saying well known tournament fighters. Either way, I’m impressed. Lee taught and trained with kickboxing champions of the time, and now we have an early glimpse into some of the things he was showing them and how he put it together. It would have been fascinating to see him pursue a career in competitive fighting over film, but then, we may have missed out on some of the coolest fight scenes in cinema.”

Beerdy also shared a few more cool clips of Lee in his prime that are still floating around the internet in various incarnations, including this clip of Lee taking on a karate master while blindfolded:

In other Bruce Lee news (yes, there’s even more!) cable TV station Cinemax has picked up a new 10 episode series called Warrior. The inspiration for the series is an old idea from Lee himself.

“Warrior is an action series set against the backdrop of the Tong Wars of San Francisco’s Chinatown in the second half of the 19th century,” Variety reports. “It tells the story of Ah Sahm, a martial arts prodigy who immigrates from China to San Francisco and becomes a hatchet man for one of Chinatown’s most powerful organized-crime families.”

The show’s creator, Jonathan Tropper and executive producers Justin Lin and Danielle Woodrow will be working from notes provided by their fellow EP – and Lee’s daughter – Shannon Lee.

“As a show that proudly bears the imprimatur of Bruce Lee, it’s our intention to deliver not only explosive martial arts action – which we will – but also a powerful and complex immigration drama that is as relevant today as it was in the 1870s,” Tropper said in a statement.

“I’ve always admired Bruce Lee for his trailblazing efforts opening doors for Asians in entertainment and beyond,” executive producer Lin added. “So I was intrigued when Danielle told me about the urban legend of his never-produced idea for a TV show and suggested we bring it to life. Then, when Shannon shared with us her father’s writings – rich with Lee’s unique philosophies on life, and through a point of view rarely depicted on screen – Danielle and I knew that Perfect Storm had to make it.”

Warrior begins production in Cape Town, South Africa soon. We’ll be sure to keep you up to date as the series progresses!

Are you excited about the new Bruce Lee footage? What do you think about Warrior? Let us know in the comments!

And check out our extensive collection of Bruce Lee materials and gear in our online store!