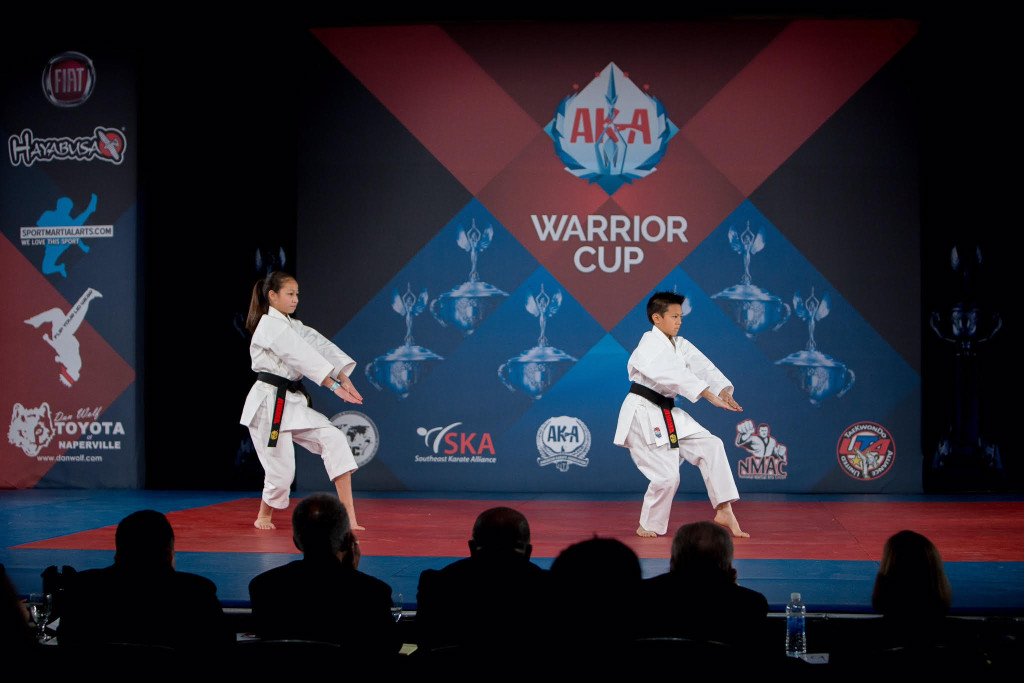 Kieran Tamondong and Emma Teo compete at the AKA Warrior Cup, 2016

As we wrote yesterday, AWMA and ProForce sponsored athletes Emma Teo and Kieran Tamondong kicked off the 2016 tournament season in fine style on January 15 and 16 by taking home top honors in Team Sync Forms and Weapons Overall at the AKA Warrior Cup.

You can watch their winning performance here:

We’re very proud of our young athletes and their accomplishments, especially give how hard the adult competition was in their division. So we decided to celebrate their victory by interviewing the duo about their win and their decorated martial arts careers.

In yesterday’s post, we picked Kieran’s brain for training and competition tips. Today, we talk to multiple time NASKA World Champion and WKA gold and silver medalist (and book cover model) Emma Teo about her history on the mats and find out what kind of advice she has for young people –especially young girls – who might be interested in taking up karate. 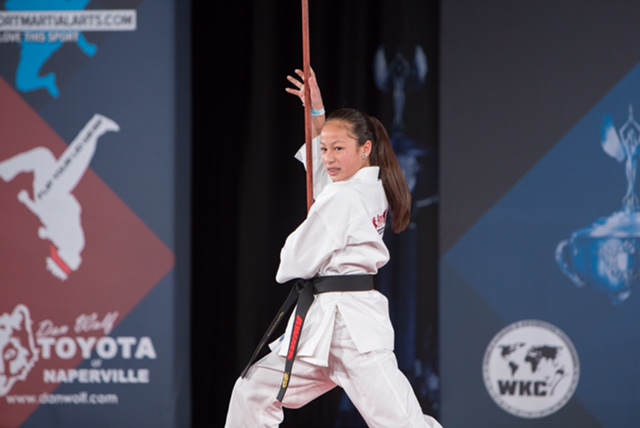 At only 13 years of age, Emma already has a decade of karate experience under her black belt. “When I was 3, my brother was doing martial arts and I wanted to try it out and that’s basically how it started,” she says.

She began competing when she was 6. “I won my first tournament and basically I was just hooked after that.”

Emma’s competition slate is packed with at least one tournament every few weeks. She competes in a number of categories at each tournament. “There’s a whole variety. There’s weapons, there’s forms, there’s traditional, and there’s the sync.”

She prepares for all of them with a rotating weekly schedule. “I try to train at least five days a week and you have to alternate between forms, weapons, traditional, conditioning, and tricking,” she says. “So maybe one day I’ll do weapons and the next day I’ll do form and conditioning and also recently I’ve been starting to fight as a sort of conditioning. It’s helping a lot, actually.”

Emma won’t be adding combat to her competitive arsenal any time soon, though. “I’m not sure yet,” she says of the possibility of tournament fighting. “I like it right now, but things could change. I’m not really sure what’s going to happen with that.”

In addition to martial arts and school, she also participates in volleyball. When asked how she manages such a busy schedule, Emma says “Volleyball season just ended. That’s still an interest of mine, I’m just not as serious about volleyball as I am about karate. School-wise, I try to get my work turned in before I leave [for a tournament] so that I don’t have to catch up when I come back. I’m already on track.”

Staying on top of her studies is important to Emma, and she believes that all young martial artists should remain focused on their education. “Even if your goal in life is to do karate, you should still try hard in school. I think they’re both important.”

Teaming Up With Kieran

“I’ve known Kieran for a long time. Six years,” she says of her Team Sync Forms partner. “We’ve always been good friends and we’ve always gotten along and just recently, in late October, we were both going to Spain [for the Unified World Championships in Benidorm] and we wanted to do a Synch Form in Spain. That’s how the Sync Form got started. It was successful in Spain and then we were kind of like ‘Oh, this might work for NASKA.” And the first time we won!”

The pair hope to repeat their victory when they take their Team Sync routine to the nationals next month.

Training together online while Emma was at home in the Chicago area and Kieran was back in California was not without its technical difficulties, but they’ve been able to work around that. “The music really helps us get the pacing down, especially because Skype sometimes lags.”

According to Emma, their soundtrack also comes in handy during certain portions of the competition. “When we’re both facing one direction, the person in front can’t see the person behind, so the music helps us pace it out.”

In a post-win interview at the AKA Warrior Cup, Emma admitted that she found the competition “a lot bit” stressful. She’s a pro at managing tournament-related anxiety, though. “Sometimes, if I get nervous, I’ll put my headphones on and listen to music and I’ll just try to focus and whatever happens happens. I’ll just try to stay positive.”

When asked if she has any other tips for new competitors, Emma stresses the importance of both pushing yourself as an athlete and being honest with what you want out of a tournament. “I would just say go all out there. Do your best. If you like it and it’s something that you want to stick with, keep doing what you’re doing. And if you don’t like it, you don’t have to do it. You shouldn’t have to force yourself to do things you don’t want to do.”

There weren’t a lot of other girls for Emma to train with when she first started. “There were mostly boys, but I still got along with them,” she recalls.

She’s noticed a chance in the number of female competitors recently, though. “I moved up a division this year and there are more girls than last year. Some of them moved up with me and some of them stayed behind. I’d say there are more this year than there were last year, but I still think that the boys’ division my age still has many more.”

For any girls who might feel intimidated or unsure about participating in what’s still a male-dominated field, Emma offers the following advice: “It doesn’t matter, boys or girls. Some people think that boys are perceived to be stronger or bigger, but that just makes me want to try harder. And I just want younger girls to know that, too. That you just need to try hard to make sure that you’re just as successful as them, if not more.”

On top of continuing her own training journey, Emma is also involved with instructing the next generation of martial artists. “Now that she’s older, a lot of people will stop her and ask ‘Can you watch me do this?’ and ‘How does this look?’” says her mom, Michelle. “And she’s actually picked up quite a few students in Michigan. We travel once or twice a month for her to do privates and seminars.”

Emma wants to send a shout out to her young pupils and let everyone know how much she loves watching and helping them grow. “I just want to say that when I get pulled out to do seminars and teach younger people, I like watching them feel proud of themselves and their accomplishments, because I remember feeling proud of myself for getting a new trick or learning how to do the bo and it’s really nice watching these younger girls go through what I’ve been through.”