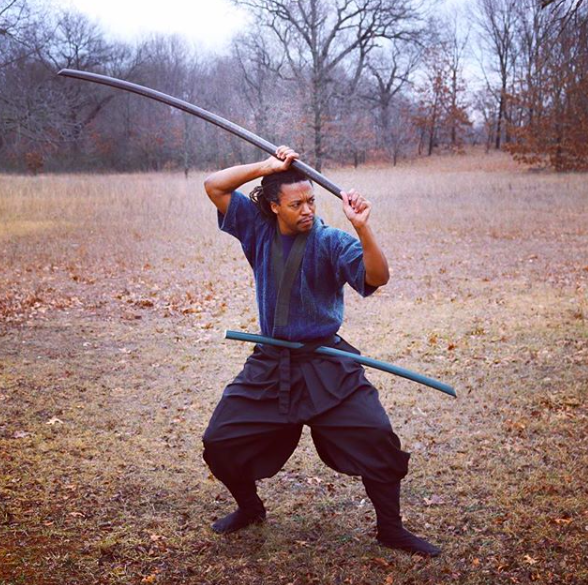 While discussing his background in a 2008 interview with methodshop, Chicago hip hop artist Lupe Fiasco (aka Wasalu Muhammad Jaco) started listing his father’s areas of expertise. “Karate instructor, engineer, military man, explosives expert, a musician,” he told the website. “He was a renaissance man for real. The whole shebang.”

A decade later, it’s pretty clear that the star is following in his father’s footsteps. In addition to being an award-winning musician, a philanthropist, and a lifelong martial artist, Lupe can now add television producer to his own growing list of titles.

This past October, Lupe co-founded an L.A.-based studio with Bonnie Chan Woo, an entrepreneur from Hong Kong. Earlier this month, the studio inked a deal for their first show, a Lupe-hosted hip hop and martial arts docuseries called Beat n Path.

According to Billboard, Beat n Path “follows Fiasco as he drops everything to embark on a cross-cultural journey across China, pursuing his passion for martial arts by practicing with kung fu masters throughout the Middle Kingdom, while also taking the opportunity to dig into China’s emerging hip-hop scene.” CTE will air Beat n Path in Southeast Asia and Hong Kong this coming March. We’ll keep you updated if and when an airdate in North America is announced.

There is, perhaps, no one better qualified to explore the intersection of martial arts and hip hop than Lupe. His enthusiasm for martial arts rivals that of the Shaw Brothers-worshipping RZA of the legendary Wu-Tang Clan and his pedigree is arguably even more impressive.

“My family is 3 generations deep in the Martial Arts and had about 5 Schools across the city of Chicago. Black Dragon Slayer Dojo and Tornado School Of Martial Arts,”Lupe wrote in a 2015 Facebook post, accompanied by a photo of a young Jaco in his karate gi. “My father had multiple black belts in multiple styles from Karate to Hapkido to Judo to Kendo. I got my first black belt when I was about 9 or 10…and started training when I was about 3…I’ve studied just about every style of martial arts you can think of.”

He told methodshop that he had achieved “a black belt in karate, two black belts in styles of samurai sword, kendo and aikido and the equivalent of a black belt in Chinese [wushu].” He also mentioned that he’d competed a bit as a child, but that his priorities had changed when it came to training. “I kind of lost the drive for it. It’s more about the discipline and the actual art and loving it.”

Lupe’s love for martial arts and his discipline in continuing to pursue them have been well-documented throughout his career in interviews, and even from the stage, where he once had to warn rowdy concertgoers, who were throwing things at him, just how many black belts have been tied around his waist.

Lupe also documents his ongoing training on his Instagram account, where he shares footage on himself demonstrating his skills with a sword:

And with nothing but his own fists, his karate uniform, and one of those four black belts:

According to at least one expert, Lupe is pretty decent martial artist, too. Raab Rashi, who owns Sword Class NYC, for example, has had mostly positive things to say about what he’d seen from the rapper.

Rashi, who was brought in to evaluate Lupe’s skills after a clip of the rapper practicing with his katana went viral last spring, told the music blog Noisey that he couldn’t identify what specific technique Lupe was demonstrating in the clip. “I’m not sure exactly what form,” he said. “It does look like a variation of seitei-gata, which is a form of iaido. Iaido, first of all, is a catch-all term that means “cutting from the draw,” drawing the sword out from the scabbard then cutting. Traditionally, seitei-gata draws from the seiza or kneeling position and he is doing it from the standing position. There are a few forms that do start from the standing position, including Nakamura-ryu and Toyama-ryu. But I’m not sure what particular school this is from.

Rashi also expressed some concern about the way that ranks are discussed in American in general. “So I’m looking at his descriptions and he says that he has a black belt in kendo and iaido. I’m always cautious using the term ‘black belt’ because in both kendo and iaido, there is no ‘black belt’ rank. We use the dan and kyu systems. Kyu means you are still a beginner and dan means that you have taken your first step. So when someone has their first dan, I guess the American equivalent to dan would be “black belt.” It means you are no longer a danger to yourself and other people and you can perform the techniques correctly and consistently. That doesn’t mean you’ve mastered the techniques, it means that you’re beginning to be able to understand them. So when someone says “I have a black belt” to me that means ‘oh, they’ve achieved their dan rank.’ To be a master, you have to be at least fourth dan.”

But he went on to confirm that Lupe is unlikely to be exaggerating his background. “Looking at his form, I have to say it’s pretty good! There’s definitely a lot of room for improvement, just as there is for any rank from the beginner to the highest master. But he definitely has training, and if he says he has his first dan in iaido I would certainly believe it from the video.”

Here’s the clip in question if you’d like to judge for yourself:

What do you think of Lupe Fiasco’s skills? Are you excited about his new show? Let us know in the comments!

And be sure to check out our online store. We’re low on hip hop gear, but we do have all of the swords, bos, and karate uniforms you’ll need to train like Lupe.